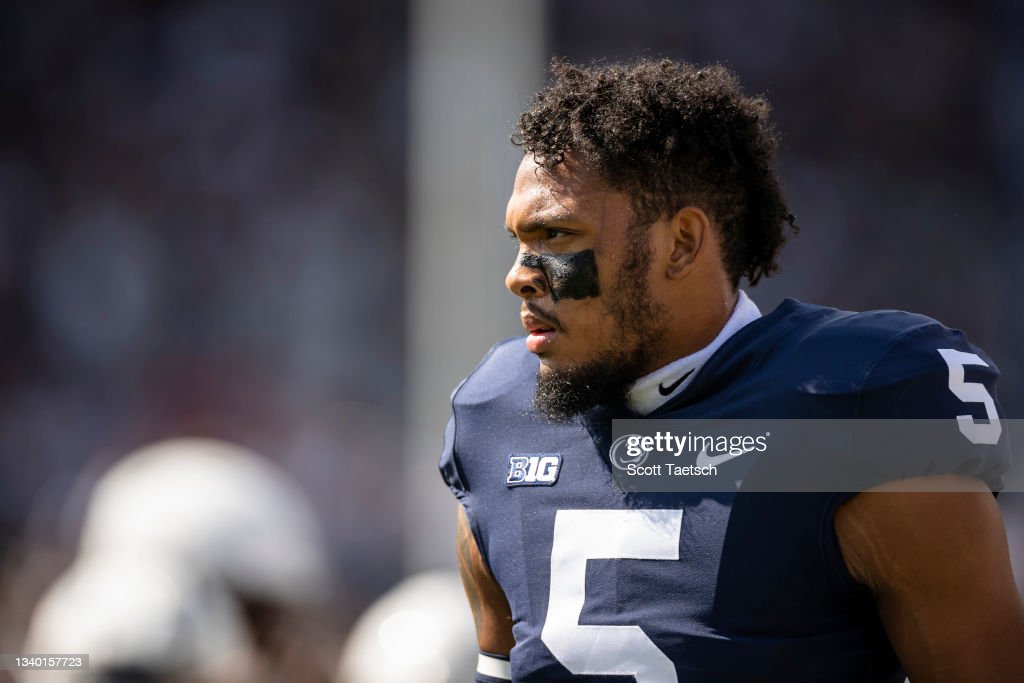 From now until the 2022 NFL Draft takes place, we hope to scout and create profiles for as many prospects as possible, examining their strengths, weaknesses, and what they can bring to an NFL franchise. These players could be potential top 10 picks, all the way down to Day 3 selections and priority undrafted free agents. Today, I will be profiling a defensive back from the Big Ten.

Tariq Castro-Fields is an experienced corner who played primarily on the right side early in the season before playing mostly to the boundary side later in the season. He has good size and speed and was used in a variety of ways including Man, Zone and occasionally rotating to a Cover 2 safety look.

Against the pass, when playing Press coverage he rarely used a jam at the line of scrimmage but played with good patience to mirror the receivers release. He has solid footwork and the speed to run with receivers on deep routes and gets in solid position to feel for the receiver while looking back for the ball. In the red zone he was solid in Man coverage on fade routes and working in limited space outside. From Off Man coverage he has a solid back pedal and reads the quarterback to anticipate the ball coming his way and has solid acceleration downhill. In Zone coverage, he has solid awareness of receivers in his area in underneath coverage and gets solid depth as the deep outside man in Cover 3. He displayed solid effort on open field tackles particularly later in the season.

Vs Auburn, Castro-Fields (5) at the bottom will get in good position on this deep ball.

Vs Auburn, from Zone coverage he reads the quarterback and make a nice break on the ball to just get a fingertip on the ball to cause the bobble and incompletion.

Vs Illinois, he displays good patience not biting on the inside fake and gets a hand on the ball to break up the pass.

At Ohio State, at the bottom he will sit on the underneath route and makes a nice break on it to deflect the pass.

Against the run, he made some effort to be the force player to redirect runners inside. When playing at the line of scrimmage he was solid chasing from the backside to attempt to make tackles. Maybe someone had a talk with him because overall his tackling improved a little later in the season especially in critical situations.

Vs Illinois, the runner gets to the third level and he is able to position himself to make the tackle.

Vs Illinois, this was his best effort as far as aggressiveness as a tackler in overtime to chase down the runner from behind.

There is a lack of physicality to his game.  He has adequate play strength within routes and most of the time he did whatever he could to avoid getting in on tackles. His transition on comeback routes is marginal and it takes him time to change direction. Double moves gave him trouble biting on the underneath route and also allowing the receiver in his blind spot in Zone. His spacing when playing Zone underneath is marginal leaving him too far from receivers to make a play on the ball. His tackling effort and technique is poor. He tackles only when he needs to and when he does make the effort he lacks physicality and slides off ball carriers due to aiming for the back of them. When blitzing he was tentative and unable to avoid blocks.

Vs Auburn, the run play comes his way and instead of getting in front of the ball carrier he waits and aims at the back of the runner and slips off.

At Ohio State, he is on the slot receiver and his COD transition to get back to ball hinders his chance to make the tackle.

At Ohio State, he will come up to make an attempted tackle but his lack of physicality to bump the runner out of bounds.

Overall, Castro-Fields has good size and speed with plenty of starting experience in a Power 5 conference. He played on the outside and has good patience in Press coverage and positions himself well on deep balls, has solid anticipation in Off coverage and makes an effort to deflect passes. His awareness in Zone is solid and has experience in several types of coverages.

Areas to improve include being more physical at the line of scrimmage and within coverage as well as his transitions and relationship to the receiver. In Zone coverage, improving his spacing between receivers and overall his effort and technique as a tackler need to improve.

Despite his size, Castro-Fields does not play with physicality and frankly that was an issue with the Steelers defense as well. His tackling was a big issue for me and while that isn’t the biggest concern for defensive backs, a player still needs to show the effort. His coverage overall needs a lot of improvement and the lack of physicality makes me question whether he could play special teams.

Right now, he would best fit in a Man coverage scheme and someone will likely take a chance on his measurables in hopes to get him to step up his game. I will compare him to Keith Taylor a player from the 2021 Draft who also has traits a team can try to build upon.

Games Watched: 2021 – Vs Auburn, Vs Illinois, At Ohio State, At Maryland, At Michigan State