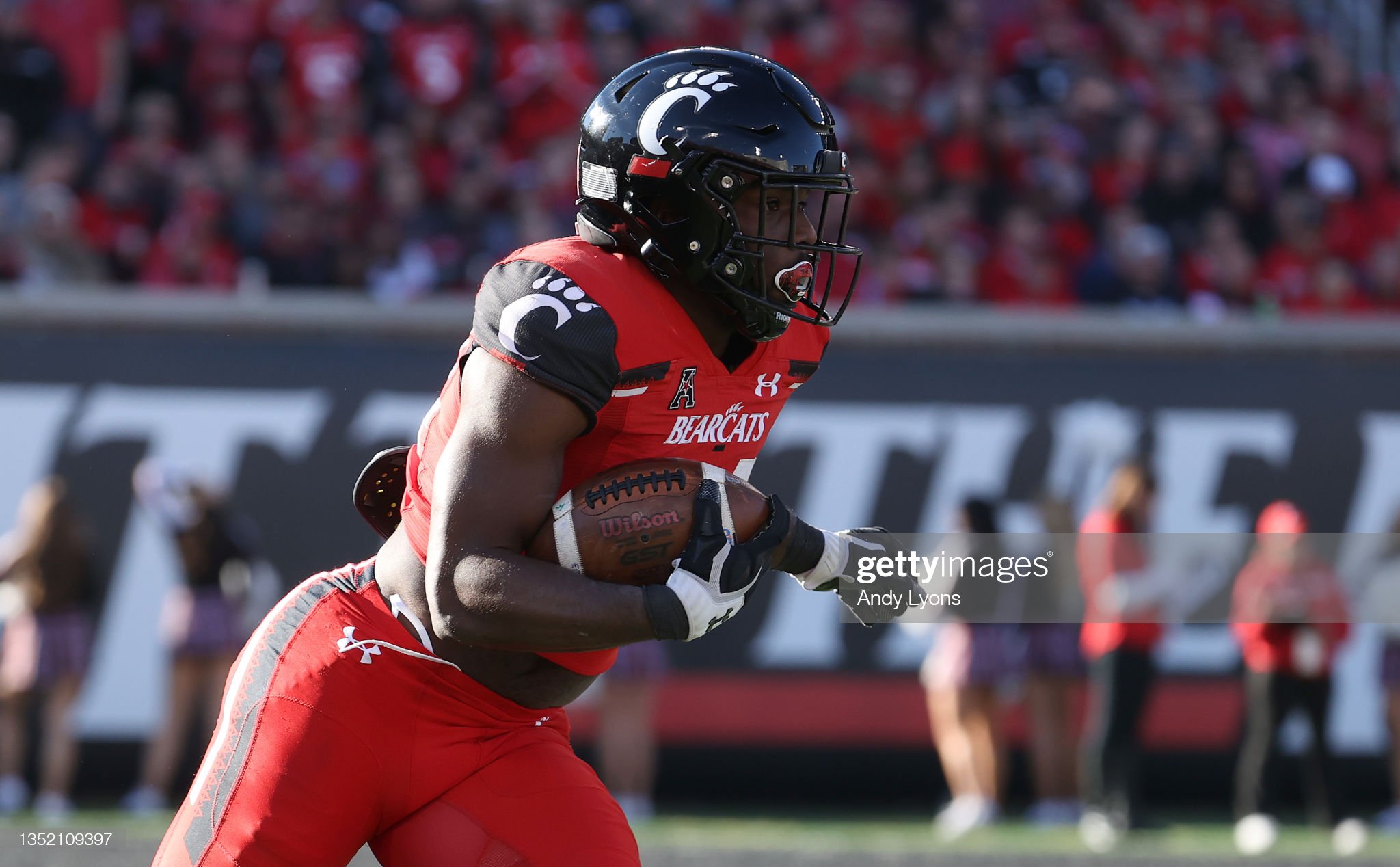 From now until the 2022 NFL Draft takes place, we hope to scout and create profiles for as many prospects as possible, examining their strengths, weaknesses, and what they can bring to an NFL franchise. These players could be potential top 10 picks, all the way down to Day 3 selections and priority undrafted free agents. Today, I’ll be profiling a running back prospect that hasn’t been getting the same attention as his fellow classmates in this draft class, but he is coming off an all-conference nod this past season and has the home-run ability to take nearly any carry to the house.

— Has the size and frame to be an NFL-caliber back
— Possesses the speed and explosiveness to create big plays on the ground when he gets into the open field
— Has quick feet to make impressive lateral cuts in space as well as with defenders in front of him to get into open grass
— Physical running style on contact that keeps his legs running to pick up additional yardage
— Refuses to go down on first contact, regularly running through arm tackles
— Does a good job pressing the create as a runner, getting up on the backs of his offensive linemen to force defenders to declare before he hits the hole
— Has shown patience to run zone concepts both inside and outside
— Can run in nearly any running system, being effective in power/gap schemes as well as on inside/outside zone runs
—Minimal tread on the tires with only 319 total carries in his college career
— Soft, natural hands in the passing game as a check down option in the flat or out on a route
— Willing and capable pass protector that comes up and sticks his face in the fan of LBs and DL and absorbs the block with his stocky frame

— Has a history of ball security issues at the college level
— Doesn’t have the best feel for outside zone runs and can be a tad slow to read blocks in front of him
— Will struggle to hit the hole in-between the tackles at times if space is minimized to make a cut
— Eyes need to improve to see blocks and create more as a runner outside of what is initially blocked up for him
— Can fall off blocks early due to poor punch and stick with his hands, often relying on body blows rather than standing up blitzers

— Redshirt Junior prospect from Tampa, FL
— Four-star recruit and the No. 6 all-purpose back nationally by 247Sports
— Originally selected the Crimson Tide over Arizona, Nebraska, USF and UCF
— Appeared in four games as a true freshman, carrying the ball seven times for 37 yards (5.3 YPC)
— Appeared in four games before redshirting in 2019 and received 24 carries for 114 yards (4.8 YPC) and three TDs to go along with two receptions for 11 yards
— Decided to enter the transfer portal and joined the Bearcats early in 2020 after two years at Alabama, was granted a waiver to be eligible in Fall 2020
— Served as a backup running back played in all 10 games on the season in 2020 where he totaled 73 carries for 483 yards (6.6 YPC) and eight TDs to go along with eight receptions for 51 yards
— Broke out in 2021 as the lead back for the Bearcat offense where he started 13 games and got 215 carries for 1,319 yards (6.1 YPC) and 19 rushing TDs while chipping in 21 catches for 220 yards and another score
— Broke away for three 70+ yard runs n 2021 (four on his career)
— 2021 All-AAC First Team, 2021 AAC Championship Game Most Valuable Player

Jerome Ford of Cincinnati took college football by storm in 2021, winning first team All-AAC accolades for rushing over 1,300 yards and 19 TDs on just 215 carries. However, it was a long-time-coming for Ford who initially started his career in Tuscaloosa with the Alabama Crimson Tide, playing sparingly while buried under a deep depth chart, prompting the move to the Queen City. When you watch Ford play, you see a fast, explosive runner that has legit juice to hit the home run. He gets up to top speed quickly and can pull away from defenders in pursuit. Here is one example against Houston where he runs through the teeth of the defense and pulls away for a long TD run.

My friend and former coworker Jeremiah Ortiz currently works as an Assistant Strength and Conditioning Coach for the Bearcats Football Team. I reached out to him about Ford, and he had this to say:

“Jerome is very strong physically and probably is the fastest guy on the field. If they are watching the film, they will see he is easily a top five running back in this class. We have clocked him on our Catapult tracking units hitting game speeds at 22.51MPH.”

While Ford only ran a 4.46 at the NFL Combine, JO’s remarks on Ford are evident on tape. His speed and burst the real deal as he can be a threat to take any carry to the house if he sees daylight. This carry against UCF perfectly encapsulates that as we watch Ford take the handoff and read his blocks perfectly as he shoots through the gap into the second level, showing off his sprinter’s speed as he eliminates the angle of pursuit by the safety and rips off the breakaway score.

While some evaluators will suggest that Ford doesn’t do the best job at reading and setting up his blocks, I would argue that he merely just needs to be more consistent. He sets up his blocks well on several occasions on film, pressing the LOS and getting right up behind his OL to get defenders to commit which opens running lanes. That is what we see on this rep against the Knights as Ford gets right on the backside of his OL then quickly cuts the left into open space, getting into the second level for first down yardage.

I will knock Ford for not having the best lateral agility when in the open field as he can be a tad indecisive when approaching defender who have squared him up to make the tackle. We see this on this rep versus Alabama in the CFP Semifinal where he takes the handoff and starts to stutter step as he approaches the tackler, but fails to make a move laterally, thus allowing the tackler to wrap up his legs and take him down to the turf.

Still, has shown on several occasions that he can jump out of tackle attempts and make defenders miss in space like on this rep against the knights where Ford jump cuts away from one tackler and sidesteps another before being swung down after a nice run.

Ford also has shown that he can run with a bit of patience as a runner when executing zone concepts, allowing blockers to get on defenders to allow him to get into open space. Here is one example against UCF where they run outside zone to the right and Ford waits for his blockers to open a hole that he bursts through, dragging defenders as he nearly picks up first down yardage.

Speaking of dragging defenders, Ford is a strong, powerful athlete much like JO mentioned earlier, having the lower body strength and leg drive to churn out extra yardage after contact. Here are a couple of examples of Ford taking on tacklers and fighting though for additional yards, breaking through tackle attempts, or moving the pile with great effort till the whistle blows.

When it comes to catching the football, Ford hasn’t had a lot of use in this area but has shown to be reliable when called upon. He has soft, natural hands as a pass catcher and can be a viable checkdown option, a screen game option, and even attack defenses down the field life we see on this play where he runs the wheel route along the right sideline and reels in the 20-yard completion, showcasing that valuable three-down skill set.

While a capable pass catcher, Ford has also shown to be quite the willing pass protector as well. He actively seeks out contact as a blocker, scanning the LOS and looks for opportunities to step up and throw his body in there. His technique could use some work to better sustain blocks, but the heart and desire to get it done is there. There aren’t very many backs that would be willing to do what Ford does on this play, stepping up to pick up a looping #48 Phidarian Mathis up the middle and manages to stand him up while staying upright, allowing #9 Desmond Ridder to escape and pick up yards with his legs.

Overall, Jerome Ford is another case of a talented, smaller-school running back who tore it up with the opportunity given to him and has the requisite skill set to play as a three-down back at the next level. Some evaluators may knock Ford for his lack of feel and vision at times as well as his lack of production in the passing game, but there are instances where Ford shows he can do these things on tape.

The exciting thing about Ford is that while he is a proven home run threat as a runner that also has the power to churn out the tough yardage on the ground, he is relatively raw having only 319 total carries in his college career, suggesting that he still has room to grow as a running back with minimal tread on the tires.

Coming up with a pro comparison for Ford was difficult given his unique frame, being top-heavy yet having a thinner lower half but still possesses that power and leg drive in his legs paired with his home run ability. After looking at several running backs, Miami Dolphins RB Raheem Mostert made the most sense due to his similar home run ability as a runner that possesses elite top speed. Mostert may have tested faster in the 40 than Ford, but Ford’s tracked game speed at 22.51MPH would’ve have been tops in the league last season, second only to Mostert in 2020 who was clocked at 23.09 and 22.73MPH via Next Gen Stats. Mostert also runs angry, willing to take on tacklers like Ford does.

Ford should come in as a compliment to a smaller, pass catching back or serve in a 1A/1B committee with a larger, “Thunder” style RB that picks up the tough yardage in-between the tackles while Ford can be that lightning in a bottle to hit the long runs. The thing is with Ford, he can play the Thunder and Lightning role, having the strength and power to run in-between the tackles as well as the speed and explosiveness to rip of the long run. Given his upside as a pass catcher and his fresh legs, ford could be the perfect complement to Najee Harris in the backfield for a Pittsburgh Steelers running game looking to add some juice in the backfield.