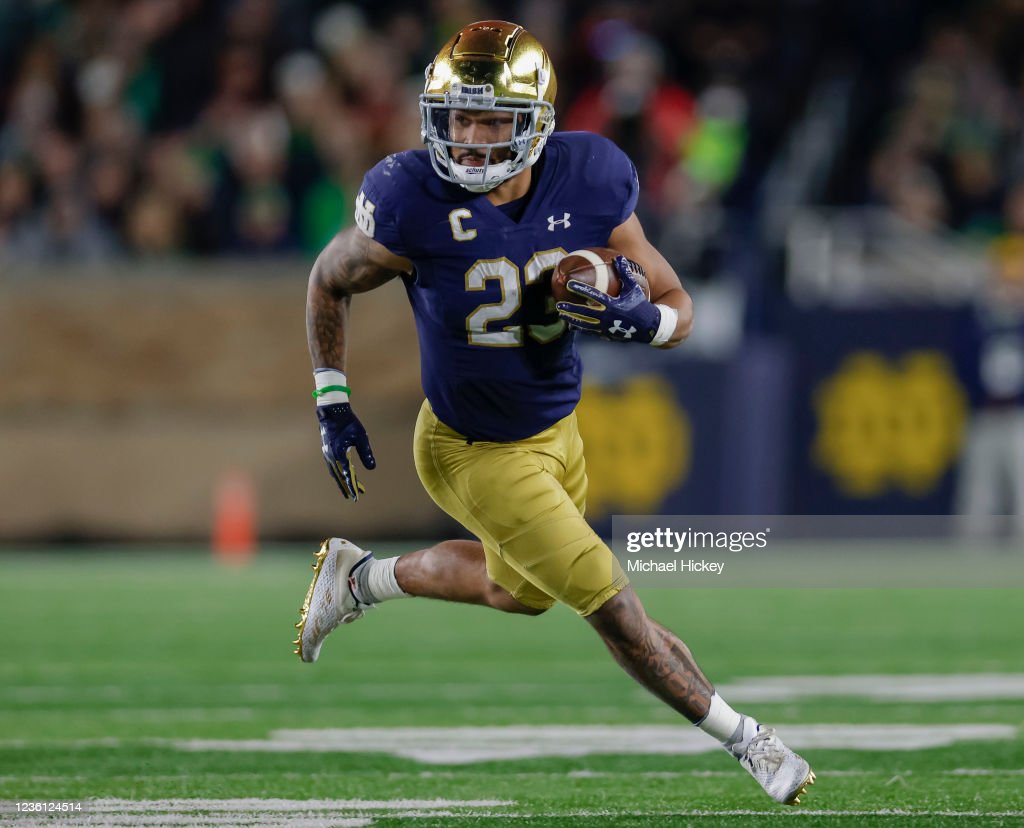 From now until the 2022 NFL Draft takes place, we hope to scout and create profiles for as many prospects as possible, examining their strengths, weaknesses, and what they can bring to an NFL franchise. These players could be potential top 10 picks, all the way down to Day 3 selections and priority undrafted free agents. Today, I’ll be profiling a running back prospect lacks the size and long speed teams traditionally look for in a feature back, but has the skill set to be a real weapon in the passing game as well as on the ground.

— Team leader and plays with a chip on his shoulder every play
— Runs with more strength in-between the tackles than his size would suggest
— Has carried the load in college as well as operated as the pass-catching back, suggesting he can play multiple roles for an offense
— Has a steady, smooth running style
— Can make large lateral cuts to evade tacklers to get into space
— Natural pass catcher both out of the backfield as a check down option and out on routes along the sideline or up the seam
— Has been split out in the slot as a receiver, running routes and catching passes naturally over the middle of the field
— Has the wiggle and shake to create separation as a route runner
— Fearless pass protector that relentlessly unloads on blitzers
— Scans the field and will step up to put his face in the fan
— Takes pride in pass protection, looking to put his competition into the ground

— Quicker than fast with average long speed (4.65 40) and explosiveness
— More of a one-speed runner than having a second gear
— Lacks ideal size to be a traditional feature back at the next level
— Will struggle breaking through wrap-up tacklers at the next level due to lack of size and play strength
— Plays strong for his stature, but will get tossed around at times by bigger, more physical defenders
— Can make defenders miss, but does possess high-tier elusiveness as a runner
— Has a history of putting the football on the ground
— Will be a willing blocker, but can have a hard time dropping anchor and stalling power rushers as a pass protector

— Redshirt Sophomore prospect from St. Louis, MO
— His father, Larry, played linebacker at Northern Illinois and his uncle, James Gregory, won a national title at Alabama as a defensive lineman
— 2018 Missouri Football Coaches Association Class 5 Offensive Player of the Year and helped St. John Vianney to the 2018 Class 5 Missouri State Championship
— Early enrollee to Notre Dame, began taking classes in January 2019
— Saw action during the first four games of the season where he rushed four times for 26 yards and caught one pass for three yards, also returned two kicks for 35 yards, late redshirted
— Played in 12 games in 2020 where he totaled 211 carries for 1,125 yards (5.3YPC) and 13 TDs and caught 35 passes for 313 yards and a score
— Played in 12 games as a redshirt sophomore in 2021 and received 204 carries for 1,002 yards (4.9YPC) and 14 TDs and added 42 receptions for 359 yards and three scores through the air, also returned 14 punts for 151 yards (10.8YPR) and one kick for 29 yards
— Opted out of the team’s bowl game to declare for the 2022 NFL Draft
— Team Captain (2021), Paul Hornung Award Finalist (2021), second-team All-ACC (2020), ACC Rookie of the Year (2020)

Kyren Williams came to Notre Dame as a dominant high school running back out of St. Louis, Missouri, but needed to reshape his body to adjust to the college game. After shedding some weight in his redshirt season, Williams took off for the Fighting Irish, going over 1,100 yards on the ground while showcasing his prowess as a pass catcher, helping lead the Irish to the CFP Semifinal where they squared off against Alabama. Williams would follow up 2020 with another successful 2021 campaign, again topping the 1,000-yard mark on the ground while also going over 300 yards receiving for a consecutive season, prompting him to declare early for the 2022 NFL Draft.

When you watch Williams, you see a small, yet stocky running back that has been successful in a lead back role for a traditional powerhouse in South Bend. He has been able to shoulder the load the last few seasons, showing that he can run in-between the tackles and runs hard despite his lack of size. He has good vision and can sneak through small gaps up the middle, keeping his legs churning through arm tackles like we see on this impressive TD run against UCF.

Williams has good lateral movement skills for the position, being able to make lateral cuts and subtle slides to get into space to evade defenders. He also possesses a fair amount of contact balance as a runner, being built low to the ground to stay upright on body shots and shoulder tackles. Watch this run where Williams jump cuts into the hole then side steps another defender to the right, spinning out of a tackle attempt and stiffs arms another defender as he crosses the line for the score.

While he doesn’t possess great straight-line speed (4.65 40), Williams is a steady runner that knows how to work angles and keep defenders away from him in pursuit. Here is an impressive run by Williams against North Carolina where he cuts back to the left when there is nothing there, ducking out of arm tackles and stiff arms another diving tackle attempt as he proceeds to run up the sideline, maintaining his speed to keep the defender in pursuit a good distance behind him to prevent getting caught as he scores the TD.

While Williams is an accomplished runner, many would argue his work in the passing game is what truly makes him an intriguing prospect. Not only is he accomplished at catching the ball out of the backfield, but he also has shown the capability to split out into the slot and run routes like a WR. He has a good feel for generating separation and is a natural catcher of the football. Check out this catch Williams makes on the slant pattern from the slot where #17 Jack Coan fits the ball in-between two defenders as Williams shakes the coverage man on the inside release, catching the ball in-stride and takes off for the score.

On top of being an accomplished pass catcher, many talent evaluators have gone so far to say that Williams is the best pass protection back in this draft class. He eats nails as a blocker, not standing down to anyone when asked to come up and block blitzers or defensive linemen. He also takes a lot of pride in pass protection, throwing his whole body into blocks and will level guys if he catches them off-guard. Here are a couple of clips where Williams gets the job done as a blocker, putting LBs on their backs.

Not a lot of backs have the capability to stand up toe-to-toe with defensive linemen and attempt to stall their rush. Williams has that junkyard dog mentality where he doesn’t care how big or strong the defender is, he is just going to get the job done. Watch this effort play where Williams steps up to absorb the punch of #5 George Karlafatis, having his helmet fly off upon contact, but stands his ground as stalls the rush just enough for Coan to release the pass to his intended target.

While Williams has been an exceptional back in college, questions linger as to whether he can properly shoulder the load at the next level. While strong for his size, Williams lacks the ideal bulk and frame you desire from a traditional feature back. He can occasionally break tackles due to his demeanor as a runner, but bigger, stronger defenders that tackle with better technique will likely limit the number of long plays he breaks in the league. Here is just one example of Williams getting absolutely blown up by a defender coming off the edge, a shot you don’t want your 5’9, 194lb RB taking consistently.

While elusive and quick in space, Williams does lack that long speed and burst to pull away from defenders and burn angles in pursuit. He also lacks that elite foot quickness to make defenders look silly in open space like other smaller backs possess. Here against the Badgers, we see Williams attempt to get to the corner as he bounces the run outside, but is isn’t able to accelerate fast enough or jump out of the tackle attempt before the defense flies in and shoe string tackles him behind the LOS.

Overall, Kyren Williams lacks the prototypical size and athleticism you look for in a traditional feature back in the NFL, but he possesses the qualities of vision, contact balance, pass catching, and pass protection that should all translate well to the league. He may not be best suited for three-down duties at the next level, but there should be little doubt that Williams can effectively play the third down scat back/satellite back role well for an offense looking for a capable pass catcher that can be deployed both out of the backfield as well as in the slot. His pass protection prowess and ability to contribute on special teams should allow him to see work early and earn a role on rushing downs.

When scouting Williams, New York Jets RB Michael Carter came to mind as a logical pro comparison. Carter, like Williams, also is undersized by NFL standards, but was extremely effective on the ground as a part of the dynamic Tar Heel rushing attack. He shares nearly identical size and athleticism as Williams, being quicker-than-fast while have some underrated contact balance and is a well-versed pass catcher that starred in that role in New York this past season.

Carter was selected in the fourth round in last year’s draft, and I can foresee Williams going in a similar range this year to a team looking for a compliment to a bruising early down plodder. The Pittsburgh Steelers would make sense as a fit for Williams and his skill set, already having physical workhorse back Najee Harris in place as the main guy. The lack of speed and dynamic athletic traits can cap his upside, but Williams has the mental makeup and character you look for and can be a chess piece in the passing game for an offense looking for multiple ways to create mismatches on top of what he can provide you as a runner.