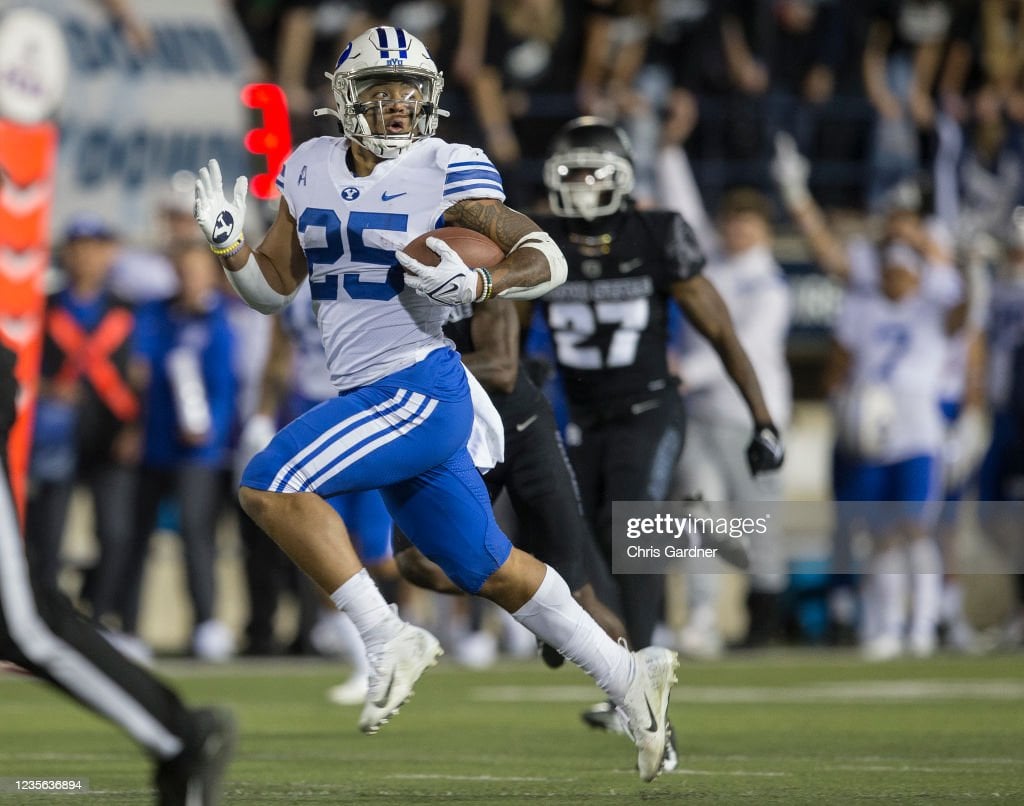 From now until the 2022 NFL Draft takes place, we hope to scout and create profiles for as many prospects as possible, examining their strengths, weaknesses, and what they can bring to an NFL franchise. These players could be potential top 10 picks, all the way down to Day 3 selections and priority undrafted free agents. Today, I’ll be profiling a running back prospect that started out playing on the defensive side of the ball in college before moving over to carry the load for his offense, showcasing a unique blend of speed and power as a runner.

— Possesses the size and frame you look for in a workhorse back
— Has the open field speed to break away long runs once he gets into open grass
— Big-bodied runner with the contact balance to stay upright upon contact with would-be tacklers
— Capable of running through smaller defenders and arm tackles to pick up additional yardage after contact
— Has a nose for the end zone when inside enemy territory
— Plays with the mindset of a former linebacker when running in-between the tackles
— Dedicates his time on defense to his improvement of being able to read defenses and attack gaps as a runner
— Showed improved patience and vision as a runner each season, suggesting he is continually developing as a running back
— Vision and ability to read blocks in zone schemes make him elusive as a runner weaving in-an-out of the trash
— Possesses the ability to make quick, small cuts with his explosive power
— Has adequate production as a pass catcher along with the skill set of making catches naturally out of the backfield
— Willing pass protector that will stand in and use his stocky frame to take on defenders

— Long speed is impressive, but tends to be more gradual, build up speed where he needs a running lane to get going
— Doesn’t possess the lateral footwork and agility to make defenders miss if caught in the backfield
— Can stand to run with more consistent pad level low to the ground to capitalize on his stocky frame
— Doesn’t possess the best instincts when it comes to picking out cutback lanes should his initial lane of travel be obstructed
— Showed more ball security issues with increased workload last season
— Needs to be more consistent as a blocker when cutting defenders or when he makes contact to avoid them bouncing off after initial punch

Tyler Allgeier has come a long way since walking onto the BYU Football Team after not receiving a scholarship offer coming out of high school. The two-way player out of California continued to showcase his versatility early on for the Cougars, playing running back, linebacker, and served as a kick returner on occasion on special teams. Heading into 2020, Allgeier was moved to a full-time offensive role where he flourished. Allgeier boasts feature back size, standing a shade under 5’11, 224lb. He also approaches the position like a former LB, running hard between the tackles and refuses to go down on first contact. He regularly runs through arm tackles like we see on this play against Utah, dropping the shoulder for extra YAC.

His stocky build and lower body strength allow him to push the pile forward, being an effective red zone runner as well as a short yardage back. Here is a two-play sequence against UAB where Allgeier pushes the pile, churning his legs to fall forward and turn no gain into positive yardage.

Here is another example against the Trojans where Allgeier takes the handoff in the red zone and powers through the middle of the defense, breaking arm tackles as he rumbles his way into the end zone for six.

What makes Allgeier an impressive runner is his vision and feel for running inside and outside zone concepts. When I spoke with Allgeier at the NFL Combine, he said that his time playing linebacker really helped him see the blocking schemes differently and be able to better process what is going on in front of him to shoot through gaps and maneuver through the defense. We see an example of this against the Blazers as Allgeier takes the handoff and shoots through the gap on the inside zone run, jumping out of one tackle attempt before eventually getting dragged down after a big chunk gain.

This feel for the blocking scheme allows Allgeier to make quick cuts laterally to evade tacklers in the second level, getting into space to make a big play. Here is an example against USC where Allgeier catches the pitch to the sideline and cuts to the right with a blocker in front of him to get into open grass, making one defender miss on a diving tackle attempt and evades another in the open field before another defender flies in from behind to take him down.

Allgeier is a great fit in zone run concepts as he can read his blocks and has the vision and footwork to make one cut and get into the gap where he can do some real damage at the second and third levels of the defense. Here is a perfect example against Houston where Allgeier takes the handoff on the outside zone off tackle but manages to decelerate and cutback to the open gap to his left, showing off a clean transition as he accelerates forward after the cut away from the defense and into the end zone for the score.

When he gets into the open field, Allgeier shows off his long speed which puts his 4.60 40 time in legitimate question. He isn’t a sudden athlete and can use a little bit of a runway, but he has the juice to house call any touch if he sees daylight. Here are just a couple examples of long TD runs by Allgeier where he breaks into the second level and accelerates in the open field for the score.

Now Allgeier isn’t without his warts as a prospect. While a willing and capable pass protector, he needs to do a better job sustaining blocks after first contact rather than allowing defenders to fall off after his initial punch. His cut blocking can be improved as well as we see on this rep where he barely gets a piece of the defender coming after the QB who forces the passer to throw the ball hot, resulting in the INT. Luckily for Allgeier, he shows fantastic effort by chasing down the defender and knocks the ball out which the offense recovers.

Along with more consistent protection of the QB, Allgeier also dealt with a fumbling issue this past season with an increased workload. Specifically in this game against USC, Allgeier coughs up the football twice, including this strip on BYU’s first play from scrimmage. Allgeier will have to make sure that this wasn’t an ongoing trend as he transitioned to the league.

While Allgeier has good vision running in zone system and has the footwork to make a quick cut to get into space, he shouldn’t be considered a particularly shifty back. He can have a tough time creating for himself outside of what is blocked and can be dead-to-rights when bottled up in the backfield, having nowhere to go like on this play against the Utes where he can’t shake the defense.

Overall, Tyler Allgeier fits the mold as a wide-zone runner with three-down value in an offensive system like that of the “Shanahan offense” where he can operate as a prototypical one-cut back and use his feel and vision of zone blocking schemes to flow with his blocks and make one cu if necessary to get out in space and do damage in the second and third levels of the defense. He is a strong, powerful runner that can be a quality short yardage/goal line back due to his build and effort after contact. While a capable pass catcher, Allgeier may be best suited as a two-down runner to start his career as he develops his pass catching and pass protection consistency.

When watching Allgeier run, his frame, play style, ability to accelerate in the open field and strength as a runner upon contact closely mirror that of Cleveland Browns RB Nick Chubb. This isn’t to say that Allgeier is the same caliber of athlete as Chubb who possesses more immediate speed and burst, but rather stating that Allgeier can likely be a “poor man’s” version of what Chubb is for the Browns: a stocky, strong back that can pick up the tough yardage as well as is an efficient mover that can gash defenses in inside and outside zone schemes, doing his best work when he has a runway. Both backs have similar open field speed, and can catch the football, but aren’t considered elite.

The Pittsburgh Steelers could use a capable backup running back to complement Najee Harris in the backfield, and Allgeier told me at the NFL Combine that he spoke with RB Coach Eddie Faulkner while there. While Allgeier may not be this overly elusive, impressive pass catching back that would provide the opposite of what Najee Harris does, he does fit the mold of a big, bruising runner that can run in-between the tackles, much like Pittsburgh has traditionally looked for at the position. However, Allgeier does bring that open field juice to the table as a runner if Pittsburgh would want to implement more zone concepts. Thus, Allgeier could possibly be a name to watch on Day Three of the 2022 NFL Draft.