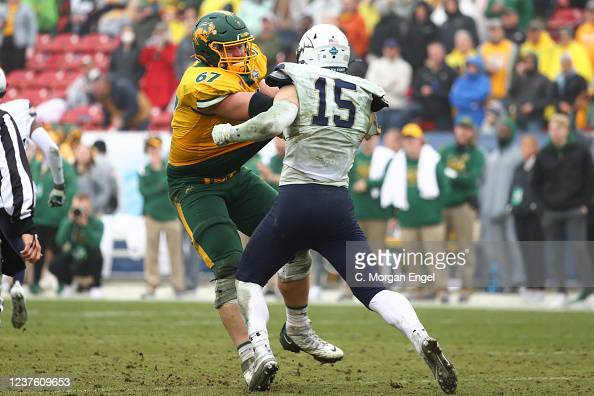 From now until the 2022 NFL Draft takes place, we hope to scout and create profiles for as many prospects as possible, examining their strengths, weaknesses, and what they can bring to an NFL franchise. These players could be potential top 10 picks, all the way down to Day 3 selections and priority undrafted free agents Today, I’ll be profiling an offensive line prospect that starred for a small-school powerhouse in the FCS but may be best suited for a position change at the next level.

— Has great size paired with good length for the next level
— Strong, sturdy frame with the thickness and core stability to absorb contact
— Position versatile having played both guard and tackle spots in college
— Only known to have surrendered a half a sack in his college career
— Aggressive run blocker that looks to run his opponents off the ball
— Physical play style as he takes pride in putting defenders on their backs
— Effective square puller who can either kick out the edge defender or pick up a second level box defender and wash them down the LOS
— Has the movement skills to get up to the second level
— Has impressive grip strength that latches onto the opponent’s pads with his punch
— Runs his feet on contact and will block to and through the whistle
— Quick setter in pass protection that plays with patience and good hip/knee bend
— Has shown the ability to mirror in pass protection and recognize twist/stunt pickups
— Core strength and size makes him viable pass protector against the bull rush

— Redshirt Senior prospect (sixth year) from Balfour, N.D.
— Born July 20, 1998 (age 23)
— Older brother, Tanner, was a center and Rimington Award winner for the Bison from 2014-18 before signing as an undrafted free agent with the Los Angeles Chargers
— Five-year starter and two-time captain for the Drake-Anamoose Raiders in HS
— Also, an all-district performer on the basketball court
— Sat out the entire season as a redshirt in 2016
— Appeared in nine games in 2017 as a reserve OL
— Backup offensive lineman in 2018 and played in all 15 games as a member of the PAT and field goal unit
— Started all 16 games at right tackle in 2019 and in 12 regular-season games had a team-high 100 knockdown blocks and 8.3 knockdowns per game while playing 724 total snaps with only one-half sack allowed
— Started all 10 games during the spring 2021 season due to the pandemic and saw time at all both guard and tackle positions during the year, played 403 of 411 offensive snaps during the regular season and graded out at 90 percent with zero sacks allowed and one penalty against
— Returned to the Bison program for a fifth year of eligibility in 2021 due to the impact of COVID-19 on the 2020-21 season
— Started all 15 games at right tackle in 2021 and graded out at 94 percent on 623 regular-season snaps with zero sacks or tackles for loss allowed
— Appeared in a school-record 65 career games including 41 consecutive starts over his final three seasons
— Part of five conference and four national championships during his six-year career
— Three-time FCS All-American and All-Missouri Valley Football Conference first team (2019-2021), 2020-21 Phil Steele FCS Offensive Lineman of the Year
— 2017, 2018, 2019 MVFC Honor Roll, 2017 MVFC Commissioner’s Academic Excellence Award
— Two-time team captain (2020 & 2021)
— Graduated from NDSU in December 2020 with a bachelor’s degree in general agriculture

Cordell Volson leaves North Dakota State as one of the most decorated graduates in program history. The 6’6 1/8”, 315lb six-year senior was a part five conference and four national championship teams during his time in Fargo, seeing action in a school-record 65 games and starting 41 of those contests at every position on the offensive line outside of center. Volson leaves the Bison as an experienced, well-built blocker that specializes at displacing his competition in the run game. His size, strength, and demeanor make him a solid run blocker, blowing his competition off the ball and running them backward against their will like we see on these two plays as Volson locates the defender and runs him clear into the secondary.

Volson plays with an aggressive, physical demeanor in the running game where he looks to impose his will on his opponents. He is a finisher that wants to put you into the ground and finish on top of you. We see that in the examples above as well in the passing game with Volson executing the snatch trap technique on defensive linemen in the following two clips, grabbing them with his vice grip hands and yanking them to the ground, finishing on top of them for the pancake block.

Volson proved to be a capable athlete out in space as well for the Bison, having the ability to square pull to get the kick out block and clear wide running lanes right of the LOS like we see on this long TD run against rival North Dakota.

Volson’s size and strength at the point of attack make him a clear mismatch on linebackers when he climbs to the second level in the running game, having the strength and momentum to wash defenders down the LOS and clear them out of the play entirely like we see on this rep, springing the runner for a long TD scamper.

Volson’s versatility also is a nice trait to have in an offensive lineman making the transition from college to the pros. He has started on both sides of the LOS at tackle and guard and showcased his ability to play guard at a high level at the East/West Shrine Game. His sturdy, thick frame and core strength make Volson a capable pass protector, making him difficult to move off his spot. Here are a few clips sowing Volson in pass protection where he shows the ability to mirror the rush and pick up stunts and twists coming to his side, stalling the rush entirely.

However, there are some areas to Volson’s game that may limit his overall upside at the next level. He is a decent athlete out in space, but lacks the foot quickness in pass protection to seal off speed rushers from getting around the corner as well as move laterally in space to push up second level defenders consistently out in space. We see an example of the latter here against North Dakota as Volson climbs to the second level looking for work but fails to square up two defenders in open space. He gets hands on the second defender, but his hand placement isn’t great which could lead to more holding penalties at the next level.

His lack of lateral mobility also causes Volson to be slow at adjusting to defenders attempting to evade his blocks, thus resulting in him lunging forward and shooting his hands early which lead to whiffed block attempts. Here is one example in the same game where Volson square pulls and sees the cornerback coming across his face, resorting to leaning forward with outstretched hands, but whiffs the block attempt as the defender gets around Volson to wrap up the ballcarrier for no gain on the play.

Overall, Cordell Volson is a battle-tested, highly respected offensive line prospect that brings an edge to the game as a physical run blocker and capable pass protector. He has the size and length you look for at the position and lead the charge for an offense looking to establish an identity on the ground both as a bulldozer straight ahead as well as when asked to get out in space. Still, Volson is a limited athlete that will see increased level of competition at the next level and may struggle with more athletic speed rushers on the edge due to inconsistent hand placement and foot quickness. Thus, moving inside to guard probably is his best bet to make an NFL roster and potentially earn a starting role.

When watching Volson at NDSU, former San Francisco 49ers OG Alex Boone came to mind as a pro comparison for a variety of reasons. Boone came out of Ohio State also as primarily an OT with some experience at guard before transitioning to OG full-time in the league. He shares similar size and length as Volson (6’7, 310lb, 34 3/8” arm, 9 7/8” hand) along with nearly identical athletic testing (5.23 40, 27.5” vert, 8’7” broad). Boone too was a mean, physical blocker at the point of attack, doing his best work in the running game while being a capable pass protector when kicked inside. He ended up going undrafted and signed with the 49ers in 2009, becoming a full-time starter in 2012.

While I foresee Volson getting drafted unlike Boone, I do think that his career projection follows a similar path ultimately as a guy that moves inside and provides good depth at guard that can also play tackle in a pinch but can develop into an eventual starter in time with improved hand placement and consistent pass sets. His best work comes inside a phone booth and his size and ability to pull would be maximized inside at guard. Pittsburgh could use more depth along the offensive line and Volson could follow a similar career trajectory as former Steeler Matt Feiler who started out as a backup, but eventually found his way into the starting lineup as a capable starter in the league.