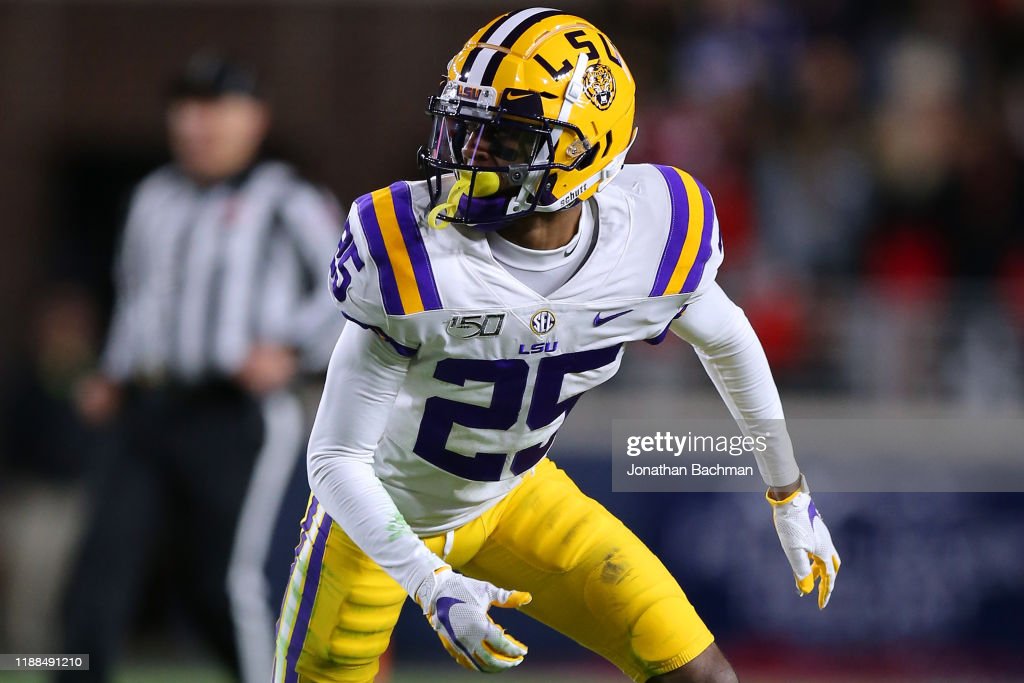 From now until the 2022 NFL Draft takes place, we hope to scout and create profiles for as many prospects as possible, examining their strengths, weaknesses, and what they can bring to an NFL franchise. These players could be potential top 10 picks, all the way down to Day 3 selections and priority undrafted free agents. Today, I’ll be profiling LSU CB Cordale Flott.

— Noticeably lighter/smaller looking in comparison to many other CB’s in this draft
— Can get pushed out of the way on run plays, more so when lined-up closer to tackle box
— Has issues at times with in breaking routes
— Gets beat on early downs, notably against Go routes
— Tends to solely play the receiver while not locating the ball in man coverage on targets downfield
— Aggressive nature hurts him a bit in play action
— Earns pass breakups but interceptions are rare
— Played timid in 2020 compared to 2021 season

Cordale Flott is a ball of energy on nearly every play, especially while watching his games from the 2021 season.  Despite his measurables, Flott will take on just about anyone head-on as would a LB or Safety.  Flott is also the type of player who feeds off making plays and he made his fair share of them during his three seasons at LSU.

There are times when one might wonder though if he doesn’t have any regard for his body as he will run towards the danger of a play to make his impact.

Flott will also push past blocks to make the highlight worthy diving tackles as well.

Here’s another instance of Flott fighting past a block and making a stop on the perimeter.

Open field arm tackles are routine and on this play he helps create a turnover for the LSU defense.

It’s rare, but there are a couple of occasions where it seems Lott either makes a business decision to not fully engage in making a stop on the ball, or falls victim to a simple juke move, allowing a ball-carrier to get past him.

Regarding coverage, Flott looked really good this past season, especially in zone coverage.  Here is the only interception of Flott’s college career, coming against Mississippi State.

Despite not tallying a high number of INT’s, Flott still finds way to force incompletions, but ultimately you want to see more turnovers.  Flott plays Hitch routes well, allowing just 10 receptions on 15 targets for 56 yards along with two dropped interceptions during his time at LSU.  Against Auburn here, Flott has a chance to make the bigger play but can’t hang on to the ball.

His current style of play doesn’t show he gambles a ton as he will play it safe in coverages.  Here’s an example of covering quite a bit of area once he recognizes the QB going to his next read. Per the norm, Flott makes the tackle.

In breaking routes will have Flott trailing more than you would prefer to see on some reps but there’s times when he’s able to recover nicely and still make a play as he does here against Florida to create a turnover for his defense.

Flott’s size doesn’t match his high level of energy and you must wonder if he can add more bulk.  There’s not a ton of tape showing him getting bullied though as he’s the aggressor most of the time on the field, more so last season compared to the 2020 season.  In watching his games from the 2020 season, after he was beat in both the Alabama and Florida games, he disappears.  Not certain if it was injury related or missed assignments with the coaches benching him, but he didn’t play after the second quarter against Alabama or after the first quarter against Florida in consecutive weeks.  Flott however, the following week, played throughout their last game of the season against Ole Miss and offered shades of how he played during the 2021 season.  Overall, he’s a playmaker and a play stopper which bodes well for his chances in the NFL.  Having the flexibility of playing in the slot or outside is also a plus – over the course of his career Flott logged nearly 400 snaps outside compared to almost 800 in the slot.

For a comp, Flott reminds me of a former division foe- Anthony Averett. Averett, formerly of the Ravens and now with the Raiders, plays much more outside, but Flott over the course of his final five games at LSU played over half his snaps there as well.  Flott is a little taller and Averett a bit thicker, but both are very sticky in coverage and each boisterous in their styles of play.  Averett was taken in the fourth round by Baltimore and could see a team this year spending a pick in that range to grab Flott as well.