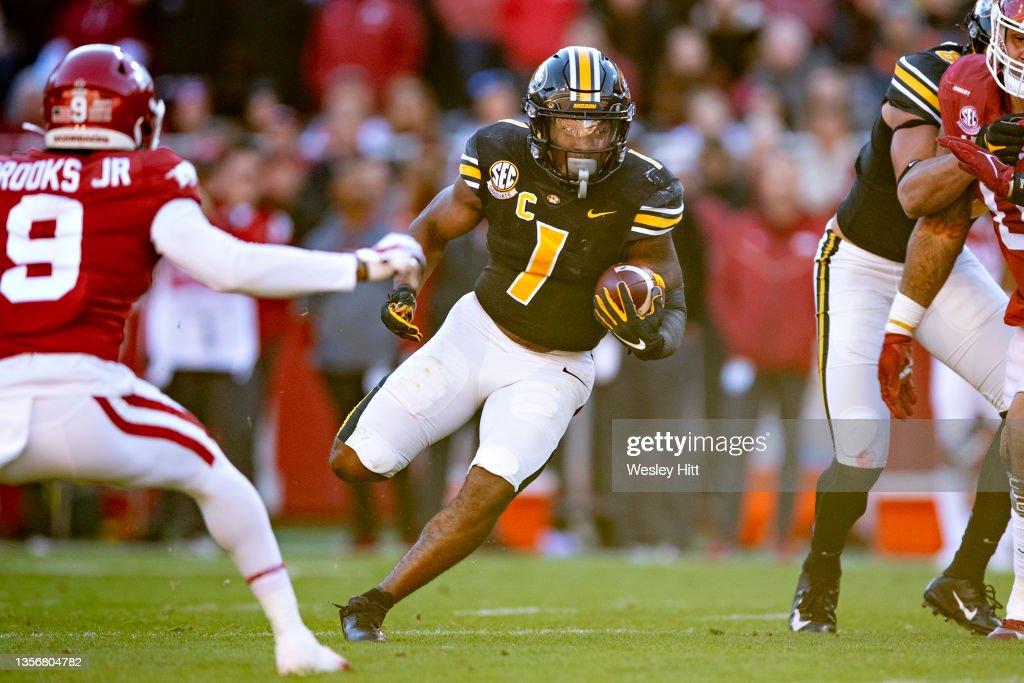 From now until the 2022 NFL Draft takes place, we hope to scout and create profiles for as many prospects as possible, examining their strengths, weaknesses, and what they can bring to an NFL franchise. These players could be potential top 10 picks, all the way down to Day 3 selections and priority undrafted free agents. Today, I’ll be profiling a running back prospect who dominated on the ground in the SEC this past season, but size concerns bring up the question as to whether he can be a feature back at the next level.

— Has the play speed and explosiveness you look for in an NFL-caliber back
— Has enough burst to keep pursuing defenders behind him
— Shouldered a workhorse workload despite being considered undersized at the position
— Has decent contact balance that can stay upright on body shots by defenders flying in
— Sees the hole and hits it hard with no hesitancy
— Can shoot through small holes up the middle, sneaking through the teeth of the defense into the second level
— Competent zone runner that follows his blocks and can set up his next move when in space
— Capable pass catcher that has sure hands as a check down/screen game option
— Has been used on jet motions and deployed outside in the formation to get advantageous matchups as a pass catcher
— Has good ball security, having only two recorded fumbles on 513 career carries
— Capable pass protector that looks for work and isn’t afraid to take the heat to keep the QB clean in the pocket
— Has a kick return history, suggesting he can contribute there at the next level if called upon

— Lacks the ideal size and power of a prototypical NFL feature back
— Can make defenders miss, but isn’t overly elusive as a runner
— Vision isn’t always the greatest, lacking that feel for recognizing the cutback lane once it opens up
— Runs hard, but lacks the strength and ability to run through tackles up the middle
— Will struggle in goal-to-go/short yardage situations when he is met before the line to gain
— Can get tossed around like a rag doll at times due to low bodyweight
— Willing pass protector, but can get overwhelmed by size and power coming full speed

Tyler Badie from Missouri is the perfect example of learning not to judge someone based on their size. The 5’8, 197lb RB from New Orleans operated in a committee his first three seasons in Columbia, having never gone over 108 carries. However, the coaching staff took the training wheels off and let Badie carry the load as a senior, toting the rock 268 times to break the single-season school rushing record with 1,604 yards while also leading the team in catches with 54 receptions on the year. To put it short: Badie was the Tigers offense in 2021.

When you watch Badie, the first thing you recognize is that he is, in fact, small in stature for the position. There are plenty of examples of him getting stuffed on film when attempting to run in-between the tackles or try and punch his way in near the goal line. He runs hard and has a lot of fight, but his size limits his effectiveness as a runner when contacted.

Still, Badie plays with a ton of heart and looks to prove the naysayers wrong as a runner. He keeps his legs churning on contact and has enough contact balance to stay upright on body shots by defenders, working to fight off the hit and continue running. Here is probably Badie’s signature run on the year where he shoots into the second level and gets hit by a defender, but manages to keep his balance, spin out of two defenders trying to bring him down, and takes off up the right sideline for the explosive play.

Badie is just as dangerous as a runner after the catch as he is as a traditional rusher. He was heavily utilized in the passing game for the Tigers, having caught over 100 receptions during his career. He is a good weapon in the screen game like we see on this rep against Kentucky, catching the pass with a convoy in front of him as he takes off for the end zone, breaking out of one arm tackle and them pushes his blocker aside to cross the plane for the score.

Here is another example of Badie catching a screen pass against the Wildcats, weaving through the defense after the catch and picks up solid yardage and the first down.

While not the most dynamic runner when it comes to start/stop quickness, Badie does possess the lateral quickness to make a cut to get in space when running outside zone. We see that here on this outside zone run to the right, having the hole open as Badie puts his foot into the ground and push laterally to the sideline, sneaking out of an arm tackle as he works his way up the sideline for a nice gain.

Badie’s size actually can be seen as a benefit at times as he can sneak through small gaps at the LOS, having the speed and burst to shoot through gaps into the second level of the defense. Here is an example of Badie accelerating through the hole into the second level, ripping off nice gains in-between the tackles.

Here is a two-play sequence against LSU where Badie scores as a runner as well as a receiver, showing his ability to weave through the defense after running through and arm tackle to the end zone on the first play. On the second play, Badie runs the Texas route, getting wide open over the middle of the field where he catches the ball in-stride and cuts through the teeth of the defense for the score.

Badie also has the speed to get to the corner and challenge defense up the sideline. Here are several runs where Badie works toward the sideline, evading defenders as he works to pick up either the first down or score the touchdown.

While a smaller back, Badie again shows that he is more than willing to play bigger than his 5’8, 197lb frame suggests as a pass protector. He may struggle at times with sheer size and power by blitzing linebackers, but he can play with a solid base, scan for work, and sit in and willingly take on contact. On this play, Badie stands up the blitzing Florida LB, getting low and lifts him up into the air with superior leverage, taking him to the ground to keep the QB clean.

Overall, Badie is an intriguing prospect as he has showcased that he can carry the load for an offense, using a unique blend of speed, quickness, contact balance, and pass catching skills to total nearly 2,000 total yards from scrimmage in 2021. Still, with only one year of high-level production along with the lack of size and high-end athletic traits working against him, the likelihood that he can shoulder the full workload at the NFL level is likely low. He would be best served for operating in a committee going forward as the change-of-pace/pass catching back that can occasionally take on more carries if needed but would do best to limit the amount of beating he takes as a down-to-down runner.

When watching Badie operate as an undersized, yet effective runner coupled with his receiving prowess as a pass catcher both out of the backfield as well as split out in the slot and out wide, my mind went to former Louisiana Tech Bulldog and current Philadelphia Eagles RB Boston Scott as a sensible pro comparison for Badie. White stands just a little shorter than Badie (5’7) the size, weight, length, and timed speed, and explosiveness are nearly identical between the two runners. Both backs operated as three-down feature runners in college, having the vision and shiftiness to maneuver through gaps as well as the mindset to put the shoulder down in attempt to pick up the tough yardage.

Scott also proved to be a capable pass catcher and pass protector in college, and that skillset has really expanded in the league with the Eagles. I foresee Badie doing the same as he likely doesn’t possess the measurables to earn a feature job in the league but can be drafted as that scat/satellite back that can be utilized out of the backfield as well as in the slot as a pass catcher and use his speed and quickness to compliment more of a plodder as a runner in a committee. Scott has shouldered the load at time for the Eagles due to injury, and Badie likely could operate in a similar role as a spot starter, but not as a long-term starter.

The Pittsburgh Steelers could really use a true scat back to compliment a big, bruising runner in Najee Harris, hence Badie could fit the bill. It remains to be seen what priority Pittsburgh puts on addressing the backup RB job in the draft, but given Badie’s skill set, his football character, and his versatility to play both as a scat back as well as a runner in-between the tackles should make him a target for teams looking for solid value on Day Three of the 2022 NFL Draft.