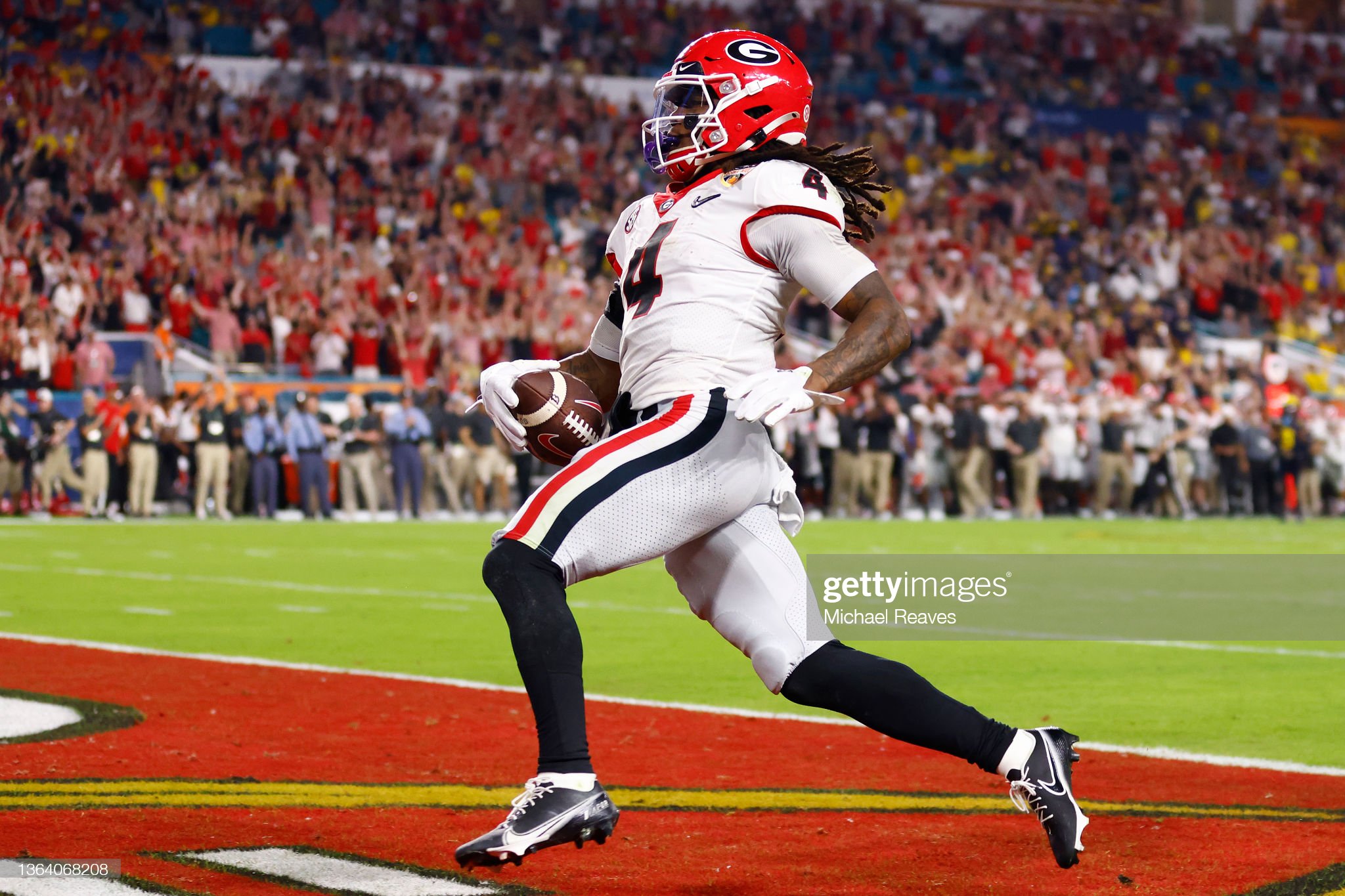 From now until the 2022 NFL Draft takes place, we hope to scout and create profiles for as many prospects as possible, examining their strengths, weaknesses, and what they can bring to an NFL franchise. These players could be potential top 10 picks, all the way down to Day 3 selections and priority undrafted free agents. Today, I’ll be profiling a running back prospect who worked in a committee for the CFP National Champions and has the NFL bloodlines and receiving prowess teams will gravitate to as a draft prospect.

— Has the long speed (4.42 40) and burst to be a threat to take it to the house if he gets into open grass
— Smooth running style paired with good vision that allows him to flow and weave through gaps and around blocks
— Has great patience allowing his blocks to set up before declaring his path of travel
— Has great rhythm as a runner, accelerating through the hole and follows his blocks well to compliment the work of his OL
— One-cut runner who can jump into space laterally when attacking the second level of the defense
— Ideal pass-catching back that can run nearly any route out of the backfield
— Has motioned out to the slot and out on the boundary as a receiver, easily creating mismatches against LBs and Ss tasked with covering him
— Generates separation effectively as a route runner and knows how to find the soft spots in zone coverage to give his QB a via target
— Great check down option that will work to get open in the scramble drill
— Has natural hands as a pass catcher that can go up and high point the football or catch in-stride
— Has shown competency as a pass protector, setting up with good hip and knee bend as well as a timed punch

— Undersized in terms of bulk with a thin lower half
— Doesn’t have instant juice as a runner, possessing more build up speed down a runway
— Lacks functional play strength to break tackles or churn out tough yardage
— Has some contact balance as a runner, but lacks the size and build to absorb contact regularly as a runner to finish runs
— Won’t be able to create for himself in-between the tackles if the hole isn’t there
— Lack of size raises durability concerns if asked to handle a full workload/ was a committee back his entire career at Georgia
— Will need to be more consistent in pass protection being in correct position
— Size and power may give him fits when protecting the QB if he doesn’t get stronger

James Cook came to Georgia as one of the top backs in the nation with a big name to live up to. Being the younger brother of former Florida State and current Minnesota Vikings RB Dalvin Cook, James has had to live in his big brother’s shadow during his entire football career. Still, James Cook enjoyed a breakout senior season coming off the heels of tragically losing his father this past winter due to complications from diabetes, going over 1,000 total scrimmage yards to help the Georgia Bulldogs win their first National Championship in over 40 years.

When you watch Cook, you see a slender, smooth runner that does a great job following his blocks and slashing through a defense. He has the vision and the feel to flow through running lanes, weaving in and out of traffic as he works to and through the second level. Watch this long TD run against Tennessee where Cook sneaks through a small gap and the proceeds to weave through the defense in pursuit, getting to the pylon for the score.

Here is a similar example against the Florida Gators where Cook runs to the right and makes a quick cut to his left to evade pressure, getting up field to split two defenders converging on him to sneak into the end zone for the TD.

Cook combines his excellent vision and feel as a runner with good long speed to gash defenses if he gets into open space. Here against Alabama, we watch Cook take the handoff and makes a quick cut back to his left in the hole to spring a long run, evading the defensive back as he accelerates forward in the open field and up the sideline before he is eventually caught from behind and thrown out of bounds.

Here is another example of Cook bouncing the run to the outside against the Volunteers, smoothly turning the corner as he picks up the first down before ultimately stepping out of bounds.

Cook has a decent about of lateral quickness and shake to make some defenders miss in space and be able to step out of a tackle attempt if in good position. Here on this TD run, we watch Cook take the pitch to the right and follow his blocks to the right sideline, jumping out of one diving tackle attempt as he walks the tightrope across the goal line to pay dirt.

Still, Cook shouldn’t be known for having the best contact balance as a runner and will get tripped up by arm tackles or if a defender comes in with solid contact. Here is a run where Cook takes another pitch to the outside, running away from one tackle attempt and tries to stiff arm another defender who warps up his legs and drags him down just short of the line to gain.

Cook’s slender, thin frame also doesn’t help his chances at moving the pile or being a productive red zone/ goal line back. His brother, Dalvin, is notably stronger with a better build for feature back duties whereas James lacks that functional strength to break tackles on contact. Watch this run inside the five against the Gators where Cook shoots through the hole, only to get dropped on contact by #7 Jeremiah Moon who squares him up and puts him down.

Cook’s biggest contributions as a prospect come to his ability as a pass catcher, both out of the backfield as well as split out as a receiver in the formation. He has natural, reliable hands and a real fell for generating separation as a route runner. Here is one example against The Crimson Tide where Cooks leaks out of the backfield as the check down option and catches the ball in-stride, turning up field and side steps a would-be tackler to pick up the first.

While Cook can be a reliable safety valve, he also does a good job working to the open spaces of the field on the scramble drill when the play breaks down to give his QB an open target to throw to like we see on this big-time first down catch against Florida on third down.

Where Cook really shines as a pass catcher is his ability to split out in the formation as a receiver in the slot or out wide and win against LBs and Ss tasked with covering him in man coverage. Here is a great example against Tennessee where Cook motions out to the right side of the formation on the boundary and cooks the LB (see what I did there haha) on the stutter-and-go TD strike.

When it comes to pass protection, Cook has shown to be competent and willing in this facet of the game. His lack of size and strength lead to him occasionally struggling against blitzing LBs coming full speed at him but has shown the technique to play with a solid base and strike with his hands like on this rep against the Vols, allowing #13 Stetson Bennett to escape the pocket and pick up yards with his legs.

Overall, Cook comes off as a slashing, one-cut runner who best fits outside zone and stretch/toss plays at the next level. His lack of ideal feature back size and functional play strength likely limits his ability to carry a full workload at the next level, as he never did during his time at Georgia. Still, his play speed, vision, and prowess as a pass catcher from a variety of different spots make him an ideal change-of-pace/receiving back in tandem with a strong, powerful runner in-between the tackles.

When coming up of a pro comparison for Cook, Andre Ellington came to mind as a similar style of runner who also functioned as a capable pass catcher for the Arizona Cardinals. Ellington also come from a Power 5 superpower in Clemson and was drafted in the sixth round back in 2013, due partially to his overall lack of ideal feature back size which is nearly like Cook (5’9 1/4”, 199lb, 9 3/8” hand). While Ellington may not have tested as fast as Cook (4.61 40), both possess good open field speed and the ability to make defenders miss in space with their lateral quickness. Ellington also excelled as a receiver in the league like Cook, going over 30 receptions three times during his career.

Pittsburgh could use a running back of Cook’s skill set to compliment the running style of Najee Harris. Cook could come in to give Harris a breather and challenge defenses as a viable outside zone runner who can hurt you if he gets into the second level as well as a moveable chess piece in the passing game that can take advantage of defensive packages that put a subpar coverage LB on him. Cook told me at the NFL Combine that he hadn’t spoken to the Steelers at that point in time, and given his draft slotting, Pittsburgh may wait till later in the draft to address the position. Still, it’s a logical fit and would form an ideal 1-2 punch with Najee Harris.