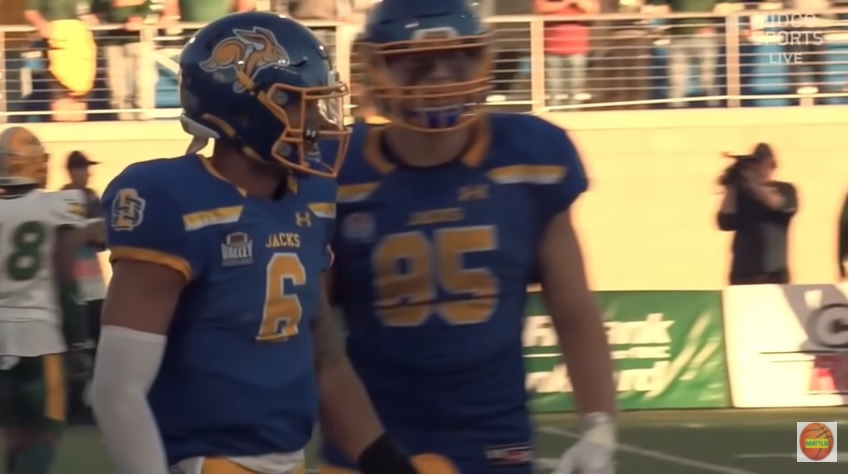 From now until the 2022 NFL Draft takes place, we hope to scout and create profiles for as many prospects as possible, examining their strengths, weaknesses, and what they can bring to an NFL franchise. These players could be potential top 10 picks, all the way down to Day 3 selections and priority undrafted free agents. Today, I’ll be profiling South Dakota State QB Chris Oladokun.

*All numbers from Pro Day

— Consistent, accurate passer
— Shows ability to mix up velocities on throws, able to put zip and spin the ball on a line but shows touch and placement as well
— Capable of making full-field progressions and reading the entire field
— Mobile, keeps plays alive with his legs, prefers to keep eyes downfield but able to take off and occasionally make defenders miss in open field, lacks great speed but a threat to scramble
— Productive and seemed to pick up new systems and offenses quickly as a result of bouncing from college to college
— Effective on third down and situational football, showed ability to win on the road against higher-ranked opponents
— Carries out run-fakes well from shotgun
— Able to throw on run and shows accuracy when rolling to either side
— Serviceable arm strength (55-60 yards) and downfield accuracy
— Clean release and overall throwing mechanics

— Below average size and has a lankier frame
— Shotgun/pistol-based offense in school, looked uncomfortable working under center in all-star games, needs to get away from center quicker and gain more depth and failed to carry out fakes as effectively as he did in the gun
— Bails on clean pockets too often and scrambles when he doesn’t have to
— Will try to do too much and force plays, leading to negative outcomes and mistakes
— Benefitted from highly-effective run game, offense faltered without it
— Loses composure under pressure and more prone to making mistakes
— Hard trouble staying in one place and played at three different colleges (also played at two high schools)
— Did not play against top-end FBS competition

— Began career at South Florida, spent 2017-2018 there before transferring to Samford for 2019 and 2020 seasons, spent 2021 with South Dakota State
— Threw 45 passes for USF across two seasons with three TD passes
— Threw 19 TDs at Samford, spent 2019 as starter for most of the year, largely used as a backup in 2020
— 2021 with SDSU: 25 TDs, 7 INTs and rushed for two TDs, led team to FCS semifinals before loss to Montana State
— Three-star recruit from Tampa, Florida, chose USF over Bowling Green, Iowa State, Toledo and others (seven offers)
— Threw for 1390 yards with 15 TDs and three INTs as senior in high school, transferred schools after junior year

Chris Oladokun is certainly a well-traveled prospect, attending a pair of high schools and three colleges over the years. He never found great stability but found a home with the Jackrabbits in 2021, leading them to an 11-win season and deep playoff run.

Oladokun has a good arm but does a great job varying his throws. When he needs zip, he has zip. When he needs touch, he has touch. Showing both here, Oladokun controls the ball well and knows when to add and take off heat on his passes.

He’s also a good athlete capable of keeping the play alive either by scrambling or keeping his eyes downfield and finding an outlet.

Though he played against smaller schools, SDSU did beat some quality FCS teams and upset Colorado State on the road to start the 2021 season, winning in convincing fashion.

As for negatives, like many college quarterbacks, he will have to get comfortable under center. The NFL is a shotgun-based league but you still have to be able to function under center or else your offense will be too limited, as the Steelers have proven the last two seasons. Watched his snaps at the NFLPA Bowl and you could see how slow and unnatural he was trying to get away from center. He didn’t play well in the game, throwing an ugly INT rolling to his left.

His pocket presence also needs work and he too often leaves clean pockets early, rolling out and cutting down half of the field to work with. Oladokun is mobile and can throw on the run (you’ll see in the first clip he still completes the pass) but he doesn’t always need to try to use his legs when he’s not in trouble.

He also benefitted from an elite, run-first offense that dominated games and made life easy on the quarterback. SDSU rushed for over 3000 yards this season and their top two backs, including draftable runner Pierre Strong, averaged 7.0+ yards per carry. In fact, the school ran for more TDs (33) than they passed for (31). In that win over CSU, South Dakota ran for over 240 yards and more than seven yards per carry, winning the game on the ground, not through the air. He won’t get that sort of luxury in the NFL.

Overall, Oladokun is a decent quarterback prospect with a blend of physical and mental tools. His path to the NFL has been bumpy but he’s found a way to succeed through difficult circumstances. Oladokun lacks elite tools to become a starter but shows staying-power in the league with his overall game and mobility. Compares to Washington’s Taylor Heinicke, a scrappy, fairly mobile and small schooler himself.