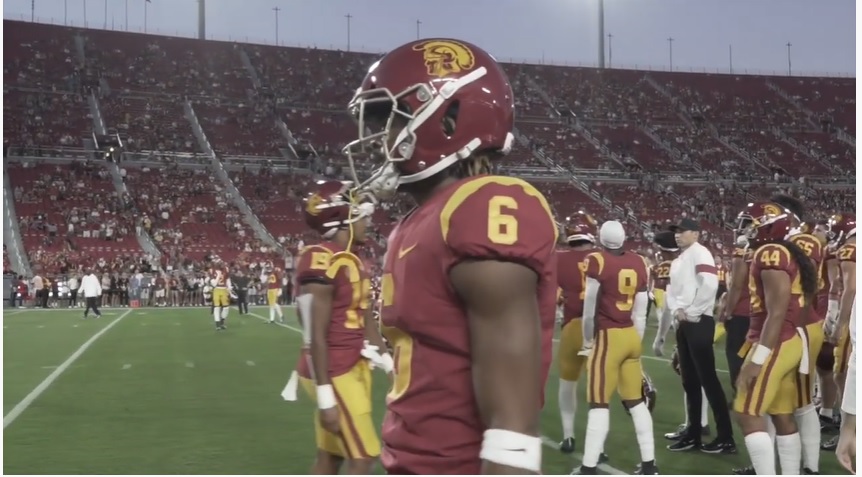 From now until the 2022 NFL Draft takes place, we hope to scout and create profiles for as many prospects as possible, examining their strengths, weaknesses, and what they can bring to an NFL franchise. These players could be potential top 10 picks, all the way down to Day 3 selections and priority undrafted free agents. Today, I’ll be profiling USC cornerback Isaac Taylor-Stuart.

— NFL size and though lacks great length, uses his reach well
— Comfortable in press alignment, at his best when he can ride the receiver’s release
— Patient in press and doesn’t open up gate too early, isn’t easily fooled by double-moves
— Experience at both outside corner spots and playing field and the boundary
— Willing tackler and able to wrap up
— Shows good hands and ability to catch the ball to finish the play
— Great athletic testing
— Younger with less experience and has room to grow
— Experience blitzing off the edge

— Looks uncomfortable playing off-coverage and in more space
— Despite testing, looks tight in the hips especially at top of route and has trouble flipping/driving
— Not a forceful tackler that has to drag ballcarriers down and allows YAC
— Struggles to find the ball in the air in man coverage
— Prone to being too aggressive at top of route, leading to penalties
— Lacks slot experience
— Minimal career production

USC corner Isaac Taylor-Stuart was a big prize get coming out of high school, though he’s never quite lived up to expectations. On the positive side though, ITS is a good-looking corner with size and a strong athletic profile, checking every box in our “what they look for” study.

Similar to what you see from Alabama corners, USC’s defense allows and encourages their CBs to roll up on the line of scrimmage and play press-man. And he looks comfortable and confident doing so. He didn’t pick off many passes but he showed receiver-like hands with this end zone/sideline pick against Oregon State this year. Great hands and body control.

On the negatives, I saw a corner who didn’t make many plays on the ball. Taylor-Stuart struggled to find the ball in the air and was prone to racking up pass interference penalties.

Though his timed agility drills were outstanding, he looks stiffer on tape when flipping unless it’s with his off-hand punch in press-man as the receiver releases. At the top of his route, he looks clunkier and stiffer and doesn’t drive downhill like he needs to.

As I’ve said before, players declare for the NFL early for a lot of reasons but Taylor-Stuart hasn’t played a ton of football. He started in 2019, barely played in 2020, and started again this year but wasn’t an every-snap corner. He could’ve used another year in the NFL.

Physically, he has lots of tools but looks unrefined technically as a corner and that hip tightness is a worry. I didn’t see much in his game to get excited about. Some team will bank on upside and potential he’s had since arriving at USC as a blue-chip prospect but I can’t view him as a draftable candidate right now.

My NFL comp is an easy one with a former USC prospect but it’s Josh Shaw, a highly touted, athletic prospect who never panned out. Taylor-Stuart doesn’t appear to have the off-field concerns Shaw has though.