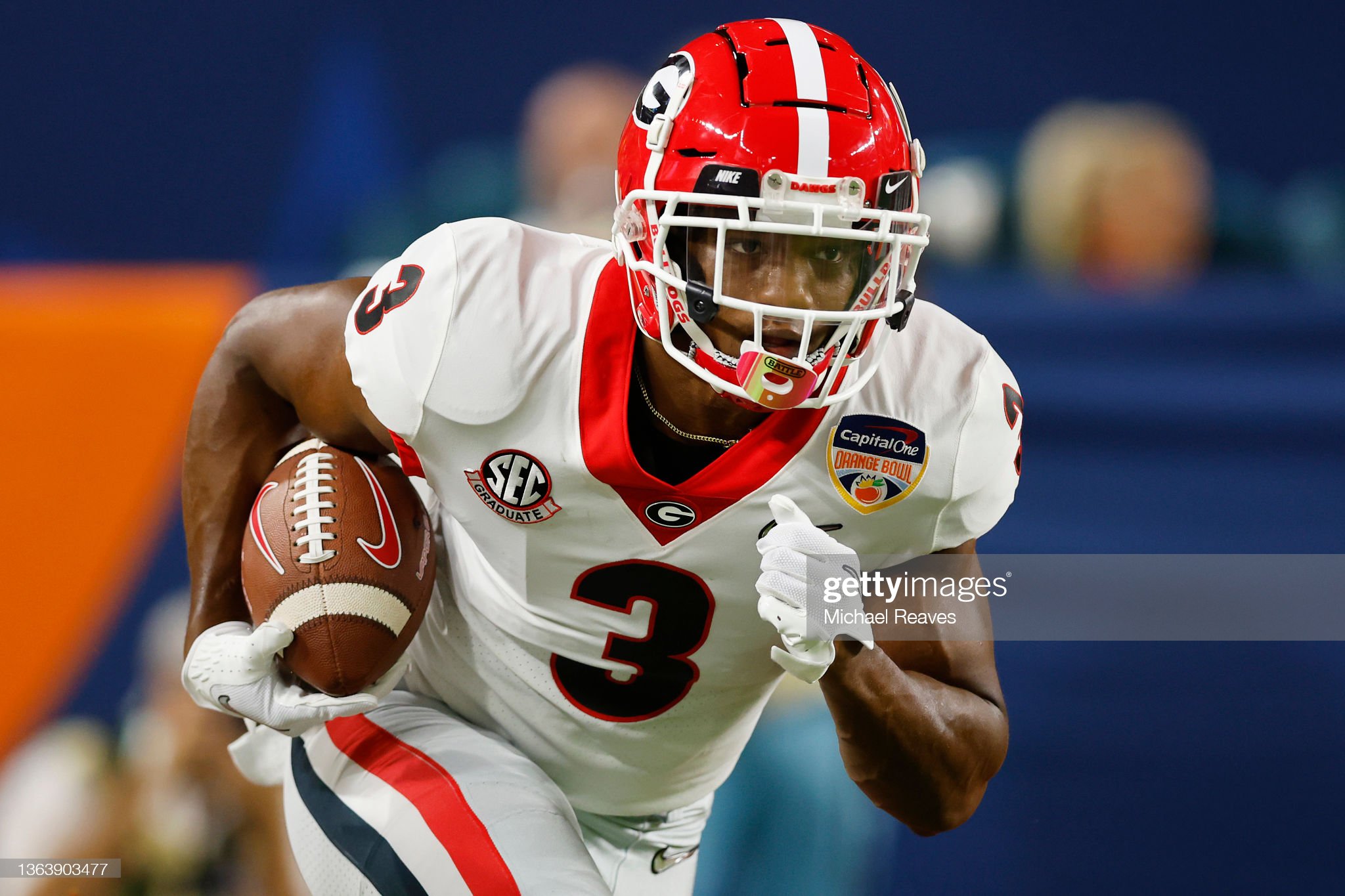 From now until the 2022 NFL Draft takes place, we hope to scout and create profiles for as many prospects as possible, examining their strengths, weaknesses, and what they can bring to an NFL franchise. These players could be potential top 10 picks, all the way down to Day 3 selections and priority undrafted free agents. Today, I’ll be profiling a running back prospect who dealt with his fair share of adversities in college after being recognized as a top recruit but spearheaded a dynamic rushing attack for the National Champion Bulldogs.

— Great football character who overcame adversity to become a two-time captain
— Possesses the size and frame you look for in an NFL feature back
— Strong, powerful runner with a rocked-up frame that enjoys contact
— Will run through arm tackles with ease and continues to plow forward when stood up for additional yardage
— Contact balance allows him to stay upright when absorbing body shots
— Ideal back to have in short yardage and goal line situations
— Will drag defenders for extra yardage, making it a chore for him to be taken down to the ground
— Powerful back that has the burst and acceleration to rip off long runs
— Has the straight-line speed (4.40 40) from his track days to pull away from defenders in pursuit
— Runs with a fair amount of elusiveness and can cut back when he processes what is happening in front of him
— Has the vision to follow his blocks and can get into open grass once he gets past the LOS
— Comes to the league with minimal usage in college
— Has vast experience contributing on special teams and is a willing hand to do whatever is asked of him

— Has the flagged injury history with two ACL tears in 2017 and 2018
— Running style could lead to him taking a beating, raising questions about career longevity
— Can be elusive, but doesn’t possess a lot of shake and wiggle to make defenders miss in space
— Will have a tough time creating for himself outside of what is blocked for him
— Has more build up speed rather than instant burst when he gets the handoff
— Has very little pass catching production during his collegiate career, two-down back?
— Needs to work in his technique and consistency to be a reliable pass protector at the next level

— Redshirt Junior prospect from Laurinburg, N.C.
— Born September 22, 1999 (age 22)
— Selected to represent the East in the 2018 U.S. Army All-America Bowl, 247Sports.com five-star prospect and ranked as the #1 running back nationally by all major recruiting platforms
— Named 2017 N.C. Offensive Player of the Year by USA Today, as well as the N.C. All-State First Team where he rushed for 2,086 yards and 34 touchdowns in 11 games his senior season, averaging 14.1 yards per carry, honored as the N.C. 2015-16 Gatorade High School Football Player of the Year
— Also competed in the 100 meters, 200 meters, 400 meters and 4×100 meter relay for the Scotland track and field team and finished sixth in the 100 meters at the 2016 NCHSAA Class 4A State Championships with a time of 10.85 seconds.
— Received his undergraduate degree in Housing Management & Policy in Fall 2021
— Enrolled at UGA in January of 2018 and participated in spring drills in a limited capacity while mending a left ACL tear he had in high school
— Redshirted his first season and missed the 2018 season after suffering a right ACL tear during pre-season practice
— Played in 13 of 14 games in 2019 and recorded 78 carries for 408 yards (5.2YPC) and three TDs along with two receptions for 20 yards, returned one kick for 22 yards, also contributed on special teams
— Started all ten games of the Bulldogs’ pandemic-shortened 2020 season where he racked up 144 carries for 779 yards (5.4YPC) and 11 TDs and caught six passes for 37 yards, also returned three kicks for 78 yards while also contributing on special teams units
— Played in all 15 games, starting in 12 where he carried the ball 160 times for 856 yards (5.4YPC) and 11 TDs and caught nine passes for 75 yards, returned two kicks for 37 yards, again played on special teams
—Two-time Team Captain (2020 & 2021) Honor Roll Student (2018)

Zamir White from the University of Georgia understands what it is like to stand at the mountaintop as well as in the valley. He was ranked the #1 RB recruit in his class coming out in 2018 but suffered a torn ACL at the conclusion of his senior season. He enrolled early in Athens and began rehabbing his knee but ended up tearing the ACL in the opposite knee prior to the start of the 2018 season, having again to go through the lengthy rehabilitation process. He managed to get back onto the field, and earned more playing time each season, culminating in this past season where he and James Cook led the Bulldogs rushing attack in successfully winning the CFP National Championship.

When you pop in the tape on White, you notice a no-nonsense, aggressive runner that plays with violence on his mind and hate in his heart. He looks to impose his will on defenders who try to tackle him, taking on the role of being the hammer rather than the nail, dishing out punishment on those who would tackle him rather than taking it. Here is a great example against Clemson in the season opener where White charges through the line on third-and-one, dropping his shoulder to break one tackle and then does the same to another defender flying in, putting the would-be tackler on his back as he rolls forward only to be tripped up from behind.

White is a strong, stout runner who has been nicknamed “Zeus” due to his Greek God-like physique thanks to his commitment to the weight room. This strength and power from the weights shows up in his lower body, specifically the leg drive he runs with on contact to always fall forward. Watch on this run White get stood up shortly after passing the LOS but manages to churn out a couple extra yards with his leg strength and effort to push the pile.

This violent, bruising running style makes White an ideal back to having in short yardage and goal line situations as we saw the former above and see the latter here on this goal line plunge into the end zone in the National Championship Game, driving his way through the defense behind his blockers for the score.

Not only is White difficult to bring down when trying to wrap him up, but he also possesses great contact balance to stay upright when defenders try to arm tackle him or come in with their shoulder. Here are two separate runs against Alabama where White manages to stay upright on contact and pick up extra yardage.

As you can see in the runs above, White is more than just a bruiser. He runs with good vision and can make impressive lateral cuts due to his strength and power. Watch this play against the Florida Gators where White makes a nice jump cut to the right, covering plenty of ground in one move while breaking out of an arm tackle attempt to pick up additional yards after contact.

He has a good feel for following his blocks into the second level where he has the track background as an accomplished sprinter to hit the jets and take it to the house. Once he gets going, White accelerates extremely well in the open field, having the speed to pull away from defenders in pursuit. Here are a couple of clips showcasing White’s open field speed on some long TD runs.

While a starter each of the last two seasons for the Dawgs, White has shown selflessness by being a willing and capable special teams contributor. Should he look to see the field immediately in the league, he will likely have to provide something as a special teams player as a rookie. Specifically, here are a couple of plays White has made in 2020 and 2021, respectively, with both coming against Arkansas. On the first play, White manages to block the punt. On the second, he finds the blocked punt and recovers it for the TD.

While White is a phenomenal athlete, he may be limited in his usage at least to start his NFL career. He has very little pass catching production in college and has shown little to suggest he is an accomplished receiver out of the backfield at this juncture. He needs to continue to work on catching the football naturally to be a reliable target in the passing game. Here is a missed opportunity against the Gators where White has the catch in his hands, but he bobbles the ball that ends up falling incomplete.

Along with pass catching, White needs to work on his pass protection to earn the opportunity to play third downs and in obvious passing situations. He doesn’t always square up his target and needs to maintain his blocks longer past the initial shove. Here is one example against the Crimson Tide where White completely whiffs on the PA Rollout fake on #15 Dallas Turner who hunts down #13 Stetson Bennett in the pocket and Night Train Neck Tie’s him down for the sack.

Overall, Zamir White is a physically gifted runner that has been through hell and back with the ACL injuries that threatened to derail his career before it ever began, but he battled back to become a talented player and an even better person. He is a guy that has his head on straight and will do whatever is asked of him to help a team be successful as a rusher as well as a special teams contributor. His ability to evade and break tackles along with impressive speed and burst suggest he could be a more impactful professional player than he was in college if given the opportunity. Still, the lack of passing down production and need to improve pass protection can cap his ceiling.

When watching White run, my mind went back to last year’s draft and another physically gifted RB that ran with similar aggressive demeanor: Denver Broncos RB Javonte Williams. Now, Williams is stockier and is a better pass catcher as well as pass protector currently, but he has similar size as White coming out (5’10, 212lb), the juice as a runner to rip off long, explosive runs, the vision and feel to evade defenders, and the physicality to impose his will as a runner on defenders, making them feel his presence with every single carry he gets.

Williams ended up getting drafted in the early second round last year, and I would expect White’s need for refinement in the passing game department as well as the injury history will drop him more into that third-to-fourth round range. However, White should excel in gap and inside zone schemes as an effective early down runner to start his NFL career in a likely tandem with a smaller, change-of-pace back, but has the talent and upside to eventually become a quality starter down the road.