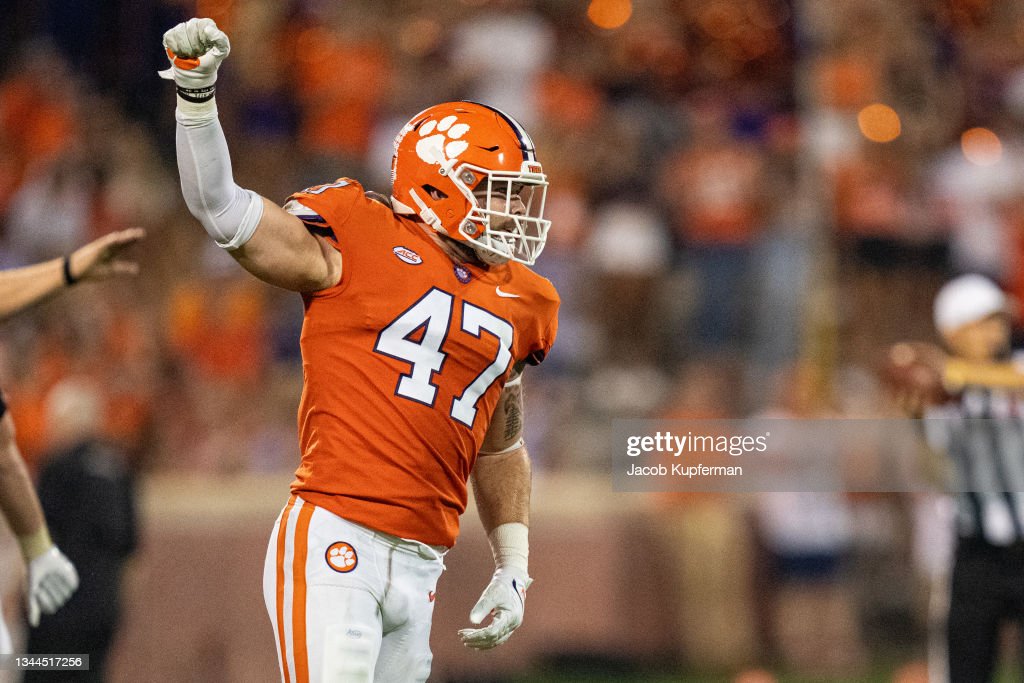 From now until the 2022 NFL Draft takes place, we hope to scout and create profiles for as many prospects as possible, examining their strengths, weaknesses, and what they can bring to an NFL franchise. These players could be potential top 10 picks, all the way down to Day 3 selections and priority undrafted free agents. Today, I’ll be profiling a linebacker from the ACC with thirty-eight career starts.

James Skalski may have the most collegiate games played I have seen with a total of 69 in his 6 years at Clemson. He had a productive career personally as well many team accolades including two National Championships. I wouldn’t want to leave either. He is an inside linebacker who played primarily on the strong side.

As a run defender, he reads his keys well and sticks to them. Solid acceleration gets him moving and he is solid scraping laterally. He is willing to fill gaps and aggressively takes on pullers with a low pad level to clog the lanes. He breaks down well inside the tackles to square up the runner and he takes solid angles to the outside. Solid flexibility and body control helps him to attempt to duck under would be blockers. They used him to shoot into gaps to disrupt running lanes.

Vs Boston College, he scrapes to his left and when the runner commits to the hole, so does he and he stops the run.

At Louisville, he will read and find the gap to breakdown and make the stop for a loss.

At South Carolina, he shows his flexibility to duck under the blocker and make the tackle.

Against the pass, he displayed solid mobility in Zone coverage getting good depth on his drops. He showed good awareness of receivers in his area and attempts to get a good jam on them. His timing and change of direction is solid when passing off receivers. He played primarily in the curl/middle drop areas but had a few snaps getting down the middle of the field in Tampa 2 coverage. He reads the QB’s eyes and flows to the ball well and is solid diagnosing screens.

Here are two pass breakups from Skalski one chasing after the QB and the other at the line of scrimmage.

Vs Boston College, he will read the QB and get in the throwing lane to get the pass breakup.

Vs Georgia, he makes a nice read on the receiver behind the LOS and he nearly slips off but makes the tackle.

While reading his keys, such as pulling blockers, he takes his eyes off the ball and it takes him out of the play. His speed is marginal forcing him to take near perfect angles on outside runs. When tackling he doesn’t run through the ball and has adequate physicality often sliding down or off of ball carriers. He has marginal play strength and struggles to get off of blocks by linemen and tight ends. Working through traffic he was marginal and spent a lot of time on the ground. Is route awareness was marginal on crossing routes and he would give up his assignment in Man coverage. He doesn’t cover closely enough to make plays on the ball. As a blitzer he had minimal success avoiding and disengaging from blockers and needs a lane to get pressure.

Vs Georgia, this is a run play to his right but he starts to drop into his coverage to his left. Maybe he was thinking bootleg but this seems to be a bad read.

Vs Georgia, this is a toss play to his left he pauses to point to his right and then doesn’t shoot the angle behind the pulling blockers.

Overall, Skalski is a player with a ton of collegiate experience and played in multiple schemes. He diagnoses his keys well, aggressively takes on blockers at the line of scrimmage. He has solid flexibility and takes solid angles against the run and has experience in Man and Zone coverage displaying solid awareness in Zone.

Areas to improve include reading the mesh point, adding play strength to take on blockers and improving his tackling technique. Against the pass, he could work on understanding route combinations, fine tuning his technique in coverages and improving ball production.

Skalski brings experience, leadership and solid production with him and those traits are important. However, his physical skills including his speed, block destruction and tackling are going to hinder him at the next level. He has the heart but I don’t think he has the athleticism.

For a comp, I’ll go with Dakota Allen who had similar size and measurables as well as having similar limitations. If he can clean up his tackling he could fight for a reserve/special team spot.

Games Watched: 2021: Vs Georgia, Vs Boston College, At Louisville, At South Carolina