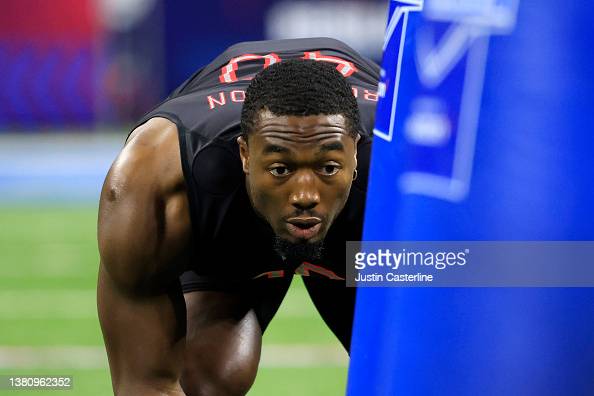 From now until the 2022 NFL Draft takes place, we hope to scout and create profiles for as many prospects as possible, examining their strengths, weaknesses, and what they can bring to an NFL franchise. These players could be potential top 10 picks, all the way down to Day 3 selections and priority undrafted free agents. Today, I’ll be profiling an EDGE rusher from the MAC conference who began his collegiate career as a wide receiver.

— Very good size and length
— Play strength and pad level to 2 gap
— Flexibility and quickness to 1 gap
— Very good motor, will chase the ball anywhere and everywhere
— Use of cross chops on speed rushes
— Tools to effectively speed and power rush
— Has some experience in Zone coverage/picking up RB in the flat
— Aggressiveness and pad level to disrupt on stunts
— A ball of clay for coaches to mold

It’s not uncommon to see college players switch positions. A wide receiver may become a defensive back. A defensive lineman may become an offensive lineman. But the switch made by Dominique Robinson is a bit unusual switching from wide receiver to edge rusher two years ago. He is a long and lean player with very good athleticism and played primarily in a three point stance on the weak side but also played on his feet.

Against the pass, he has made significant improvement from last year to this year. He shows good quickness at the snap and uses long strides to get depth quickly rushing up the arc. At the top of his rush, he has solid bend and can turn the corner solidly. He uses cross chops and a club/swim within his pass rush plan and has a good motor actively countering to get to the quarterback. As a power rusher he will use bull rushes and a stab move using his length to his advantage. He displayed good aggressiveness as the penetrator on stunts and was also used as the looper.

Vs Ball State, here are some samples from 2020. From the left edge, Robinson (11) will counter inside before shoving the right tackle and chasing down the QB. Then from the right edge it is long strides up field before flattening to the QB.

At Cincinnati, from the right edge he will loop inside and is able to move the left guard getting him off balance and forcing him to hold Robinson.

At Cincinnati, when he times the snap he can cover a lot of ground quickly to get pressure.

At Minnesota, from the right side he uses a cross chop and stab and shows off his bend on this rush.

In coverage, he was not used a great deal but he can handle Zone drops and picking up running backs in the curl/flat area. He has good mobility, covers a lot of ground and reads the QB’s eyes.  He would drop from the edge and on prevent defense situations he would also line up over center and drop into the middle Zone.

At Minnesota, from the left edge he will drop into Zone coverage in the middle. This shows his athleticism, mobility and makes it feasible he could be used in coverage.

Against the run, he also showed improvement. He showed good hand placement, play strength and extension to stand up blockers on the edge or faced up over the tackle.  Overall he’s a solid tackler and has the play strength to shed blockers. He has a great motor chasing from the backside or downfield. I witnessed him chase the ball all over and even 50 yards downfield. He has the quickness and flexibility to dip between blocker playing a one gap defense and showed good agility to avoid cut blocks.

At Cincinnati, he’s over the left tackle and will shed the block and get into the backfield to finish the block.

At Minnesota, he’s again over the left tackle and will beat the block of the eligible tackle (70) and chase down the run from the backside.

As you might expect, his pass rush plan is limited at this point and will need to learn more ways to attack the blocker. When timing the snap he is a bit inconsistent. His hand timing and placement is adequate and when he’s late with his hands he leaves his chest open. When looping on stunts he needs to use his hands more. His run defense must continue to show consistency in technique and must learn to shed blocks faster. When setting the edge he gets a little deep making it tough to handle the inside gap. He was adequate reading the mesh point and diagnosing run plays.

At Minnesota, he is a tad slow at the snap and the right tackle gets the first strike halting his progress.

At Minnesota, he is facing the left guard and is in good position and clogs the lane but is unable to shed the blocker.

Overall, Robinson has very good athleticism, agility and motor to chase the ball all over the field. He has the burst to put pressure on the tackle getting up field quickly and can get around the corner. He uses his length well as a power rusher and has experience on stunts and twists. Against the run he has the length and strength to play in a two gap defense and the agility and bend to be disruptive in a one gap scheme.

Areas to improve include improving his hand usage, developing more of a pass rush plan and becoming more consistent in his snap timing. If he continues to fine tune his technique to set the edge, getting quicker when shedding blocks and improving his ability to diagnose run block schemes will pay dividends.

While still being new to the position he showed impressive improvement in a short period of time. The tools are there to be an effective run defender and pass rusher but whoever selects him will need to have some patience. The story is just beginning with him and the arrow is pointing up. He played as a 4-3 defensive end in college but a 3-4 outside linebacker is probably his best fit with the ability to play in multiple schemes.

In Pittsburgh, he would be a core special team player and the number four edge player initially but he should be able to become the number three in short order and push for regular playing time. For a comp, on the low end I would say Justin Hollins and on the high end I’ll go with Dorance Armstrong. Both are long, lean, athletic defenders who had upside coming into the league.