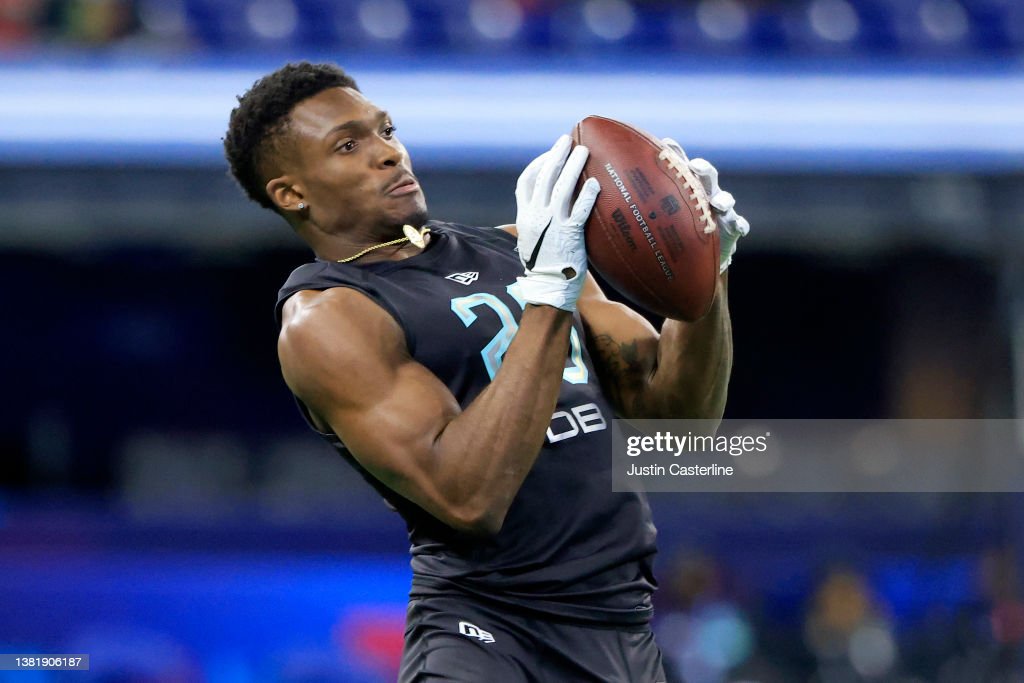 From now until the 2022 NFL Draft takes place, we hope to scout and create profiles for as many prospects as possible, examining their strengths, weaknesses, and what they can bring to an NFL franchise. These players could be potential top 10 picks, all the way down to Day 3 selections and priority undrafted free agents. Today, I’ll be profiling Pittsburgh CB Damarri Mathis.

— Most comfortable in man and especially press coverage
— Always gets hands-on in press, using correct hands
— Quick feet that is able to mirror off the line
— Has great recovery speed
— Anticipation and physicality suits him well in cover 2
— Does a nice job at playing through the receiver’s hands at the catch point
— Generally, an aggressive, physical corner – not afraid of contact
— Easily carries and stays in phase with receivers on seams
— Passionate player that wears his heart on his sleeve

— Very grabby, could be a flag magnet if doesn’t fix in NFL (Six pass-interference penalties in 2021)
— Can get out of control at top of routes
— Aggression allows him to be fooled by double moves and multi-break routes
— Allows too much space in off coverage, never closes the gap
— Moves/leans forward when pressing causing him to prematurely open the gate
— Constantly turns back to receiver
— Thought he’d show up more in the run game than he did
— Will miss some tackles due to not wrapping
— Eyes & aggressiveness can get him in trouble in zone

— Played in 49 games, started in 25, at Pittsburgh
— 87 tackles, 4.5 tackles for loss, 24 pass deflections, 5 interceptions in his career
— 2021 All-ACC Honorable Mention
— 2022 Senior Bowl invite
— Led team in pass deflections (13) in 2019
— Missed all of 2020 with non-football shoulder injury that required surgery
— Hyper-extended knee in 2021 ACC Championship caused him to miss bowl game
— Originally committed to South Carolina before flipping to Pittsburgh
— Graduated with Communications major, pursuing second degree in Administration of Justice

Damarri Mathis is a name that has gained some steam in throughout the draft process. Coming from Pat Narduzzi’s press-man heavy defensive scheme he’s not afraid to be put on an island. This aggressive style of defense is a big reason why many Pitt defensive backs stick at the next level. Mathis is trying to be the next in line of names like Damar Hamlin, Dane Jackson, Jason Pinnock, K’Waun Williams, Avonte Maddox, Jordan Whitehead of physical Pitt defensive backs that find a home in the NFL. They all are cut from the same cloth of stepping face to face with receivers each and every snap and not backing down. Let’s take a look at Mathis’ tape and see how he can contribute at the next level.

As I previously mentioned, Mathis is going to be a guy that plays his best ball when he’s face to face with receivers at the line of scrimmage. Here, you may have liked to see some better footwork off the line rather than instantly opening the gate, but he easily carries Clemson’s Justyn Ross up the sideline. As you can see, he’s not afraid to get his hands on to feel the receiver in phase. Then, he’s able to get his head around, find the football, and finish the play with the interception.

Another part Mathis’ game that is impressive is his physicality at the catch point. You often see him punching through the hands of the receiver with good timing. Here, against Virginia, he’s able to wrestle the ball out before the big hit by the safety.

Here at the top of the screen against Wake Forest, he isn’t fooled by a double move and his 4.39 speed can stick with just about any receiver vertically. Again, you can see him rake through the hands of the receiver for the incompletion.

When Mathis is playing with confidence, he’s sticky in coverage. Here, at the bottom of the screen, again in the ACC Championship, Mathis is able to drop his level quickly as the receiver breaks back toward the quarterback. No where to fit in that football.

The last thing coverage-wise with Mathis is his makeup and breaking speed. He’s initially beat inside off the line by the Virginia receiver. He’s able to carry the receiver to the post, drive on the football, and knock away the pass in the end zone.

While there is a lot of good coverage-wise with Mathis, there’s still some roughness in his technique. His footwork at the line often makes him prematurely open the gate and then baseball turn if the receiver breaks inside. This is a technique normally used by defensive backs if they’re beat on deep routes to carry their speed, but you’ll find Mathis using it consistently in these short areas, which leave the receivers with ample space to work if the quarterback were to throw their away.

At the top of the screen, Mathis is caught guessing fade and opening the gate prematurely, allowing the receiver to cross his face and wind up wide open on a slant. This is the number one no-no as a defensive back at the goal-line.

As I mentioned earlier, Mathis is most comfortable when he’s face up man to man where he can fully focus on his guy. He does get nosy and/or aggressive when in zone. In this particular cover-3 look, at the top of the screen, Mathis’ eyes get him in trouble as he tries to jump the underneath route, letting the nine route go right by him for an easy touchdown.

The last negative with Mathis we’ll outline is the penalties that he can bring. It’s a double-edged sword being a physical corner, especially in the offensively-slanted NFL. Mathis learned this the hard way in 2021 with nine total penalties on the year, six being defensive pass interferences.

On the rep below, Mathis is actually in a decent position here but the unneeded final tug on the hip and seemingly incidental feet tangling draws the flag for the referees. If Mathis doesn’t clean up his hand usage in the NFL, I see lots of holding and illegal contact flags in his future.

To finish off the film study, let’s take a look at Mathis fulfilling his tag as a “physical” cornerback, with his play in the run game. In the two clips below you can see him shed a receiver against Clemson to make the stop near the line of scrimmage and against Tennessee, he’s able to move with his man on the motion and fill the gap in the run game with no fear.

I honestly thought there would be more of this on Mathis’ tape because I know he can do it, but that’s the negative of playing a man-heavy scheme, he’s often caught up with runoffs from receivers that successfully take him away from the play. However, when the opportunity presents itself, Mathis will step up to the plate.

Overall, Mathis is an intriguing prospect who will fit in an NFL defense that runs a man-heavy scheme. You could see him getting on the field in year one in maybe a nickel role. While he hasn’t shown a much of that in his days at Pitt, he worked a ton in the slot while at the Senior Bowl, and didn’t look out of place. It would fit his physicality well in that spot, but with the outlook of him eventually working himself as an outside cornerback in future years.

He needs to clean up his footwork technique and grabbiness or he’ll be a flag magnet in the NFL. If he can do that, I see him being able to form into a decent starter in the NFL.