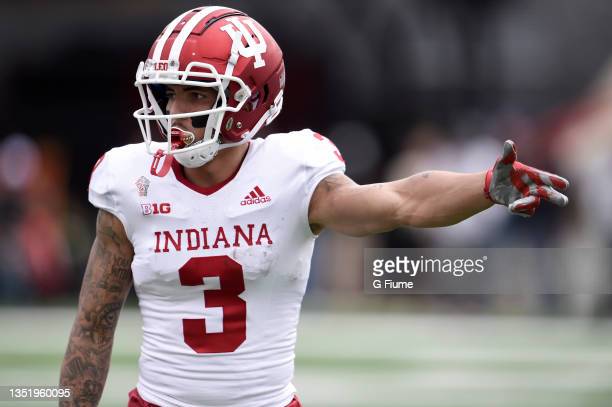 From now until the 2022 NFL Draft takes place, we hope to scout and create profiles for as many prospects as possible, examining their strengths, weaknesses, and what they can bring to an NFL franchise. These players could be potential top 10 picks, all the way down to Day 3 selections and priority undrafted free agents. Today, I’ll be profiling Indiana WR Ty Fryfogle.

— Position flexibility; can lineup anywhere as a receiver
— Understands motion concepts and getting open
— Navigates well through traffic on routes
— True downfield threat in terms of intermediate routes; 14.0 average depth of target during college career
— Play against zone coverage resembles pick & roll basketball – goes to find contact and then relocates like a shooter would to make the catch
— Does not get hung-up on press man coverage often
— Good awareness
— Makes contested catches more times than not
— Ability to win jump balls
— Doesn’t show-up teammates, very non-diva like

— Not much after the catch
— Sometimes will pause after the catch and not get up the field
— Doesn’t force many missed tackles
— Will sometimes miss-time jumps
— Drops could be attributed to lack of concentration, hearing footsteps across the middle

Ty Fryfogle was a name many had tabbed for a breakout season in 2021 with numerous preseason accolades to his credit.  The reality of his final season at Indiana though was his stats and play didn’t live up to the hype.  After a few monster games in 2020, the expectations were justified.  So why the drop-off?  Box score scouting will show he had many opportunities with results showing as mediocre.  Watch just a few games from this past season though and you will see overthrows and inconsistent QB play.  To also be fair, after seldom experiencing dropped passes during his first four seasons, Fryfogle dropped (eight) total in 2021. Contested catches were also down this past year as the typical highlight reel jump balls over his career stalled a little during his final college season.

Fryfogle had a career day if you watch his game vs Ohio State from the 2020 season.  If he wasn’t beating press man coverage, he would make the tough contested catches.  On this play below, Fryfogle beats press coverage from the slot and makes a nice catch after fighting off a physical defensive back.

From the same game, Fryfogle is once again lined up in the slot and beats his man off the line with a nice outside to inside move, then getting open for another nice grab at the sideline

Once again against press coverage, Fryfogle is now lined up outside and provides a quick outside move to get past the defensive back, makes the catch and scores.

Must praise the awareness as Fryfogle runs an adjustment on his route to get further downfield to score another TD against the Buckeyes defense.

Fryfogle threatens defenses downfield but also offers glimpses of breaking tackles off short routes and catches as he does here off Ghost motion.  These are the after the catch results you want to see more of.

These are the times when Fryfogle will make a catch but then go nowhere with it.  Here Fryfogle motions open, makes a short yardage reception, but then dances in place instead of getting a few extra yards even though given a 4-to-5-yard cushion at the catch.

Fryfogle’s strength are the intermediate and downfield routes, and if given a free release off the line, he’s going to make the defense pay.

The head-scratcher for Fryfogle is the drops on the short routes, particularly across the middle, whether it’s a hitch, crossing, or slant route, like this one against Penn State this past season.

Besides the increase in drops last year, Fryfogle also experienced quite a bit of inconsistent QB play with overthrows and underthrows.  Here is an out route which in 2020 or perhaps earlier had better timing and rhythm, but an overthrow results after getting open.

Yet one more example of running a nice route, getting open downfield, but then a bit of an underthrow which took away from what resulted in a low TD total in 2021.

Not many WR’s will have the type of three game stretches as Fryfogle did late in the year of the 2020 season, let alone against the likes of Michigan, Michigan State, and Ohio State.  No such stretches existed in 2021, not even for two consecutive games.  Perhaps the biggest reason for the drop in stats was QB accuracy in 2020 and the inconsistency which followed in 2021.  Indiana QB’s in 2020 were the 42nd most accurate passers (56.5%) among FBS teams.  In 2021 however, Indiana ranked as the 10th worst at 45.0% in passing accuracy.  Judging by the stats for Fryfogle, it certainly showed.  The reason for the increased drops this last season could be a variety of reasons.  One being inconsistent QB play in the terms of (4) different passers lining up behind center throughout the season.  What is known after watching Fryfogle more closely is he runs crisp routes, makes tough catches and has an NFL frame.

Fryfogle reminds me a bit of Keelan Cole who started his career with the Jaguars and played last season with the Jets.  Cole offers the same versatility comparison as he will line up all across the formation and earns his targets past the sticks.  Cole also doesn’t tend to get many yards after the catch, even when he makes the tough contested receptions as well.