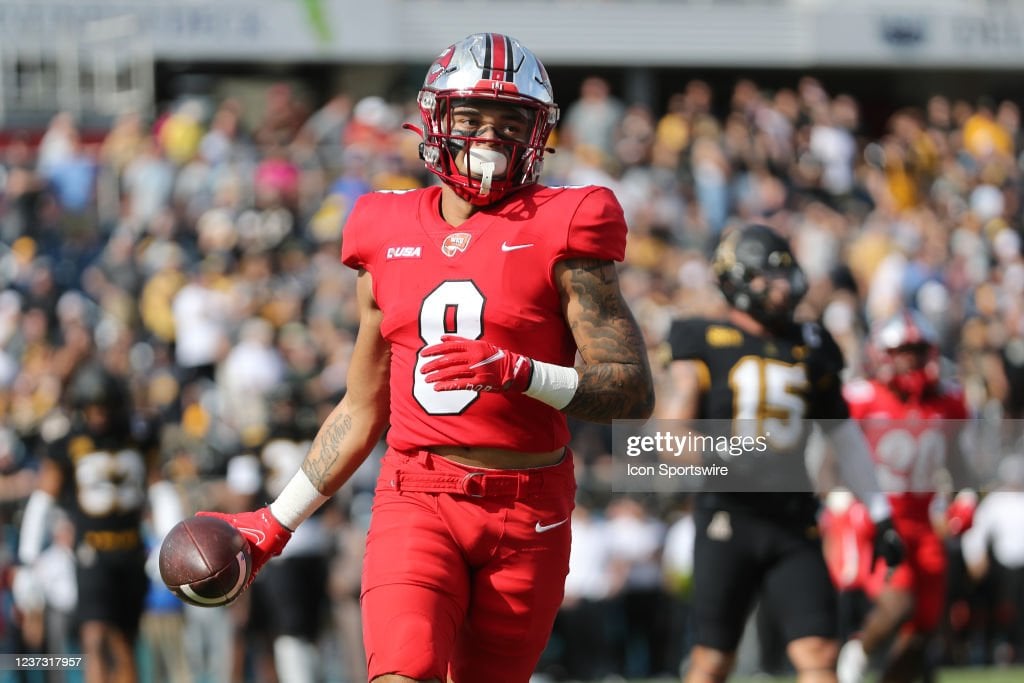 From now until the 2022 NFL Draft takes place, we hope to scout and create profiles for as many prospects as possible, examining their strengths, weaknesses, and what they can bring to an NFL franchise. These players could be potential top 10 picks, all the way down to Day 3 selections and priority undrafted free agents. Today, we’ll take a look at a Western Kentucky wide receiver Jerreth Sterns, who burst onto the scene in his lone season with the Hilltoppers.

– Savvy route runner that creates ample separation at top of stem
– Showcased sure hands in 2021 in Air Raid system
– Good feel for finding soft spot in zone coverage; patient overall receiver
– Compact frame that allows him to handle slot punishment despite smaller size
– Good feel for route running overall; knows how to set up defenders well in space
– Surprisingly large catch radius despite size; wins consistently in the air
– Tracks football very well down the field, able to adjust route to track football without losing speed
– Uber productive final season at Western Kentucky; consistently produced week after week out of the slot
– Projects as a slot receiver in the NFL that also brings punt return abilities

– One of the smallest receivers in the draft class overall
– Majority of production came in Air Raid system designed for open looks for quarterback
– Lacks the high-end speed necessary at the next level to win consistently after pro defenders
– Primarily a slot receiver; will not threaten boundary corners, rarely dealt with a challenge at the line of scrimmage in college
– Despite toughness, won’t offer much after the catch as a YAC guy
– Most of touches were manufactured in Air Raid system
– Lacks overall explosion, especially into and out of breaks

Just three times in the long, illustrious history has a receiver accomplished what Western Kentucky’s Jerreth Sterns did in 2021 for the Hilltoppers. Sterns, a transfer from Houston Baptist to follow his quarterback in Bailey Zappe to Bowling Green for a year with the Hilltoppers, burst onto the scene last fall, finishing with a program record 150 receptions for 1,902 yards and 17 touchdowns, winning the receiving triple crown in college football.

That feat marked the third time in college football history that a receiver led the country in all three categories as Sterns joined Alabama Heisman Trophy winner DeVonta Smith in 2020 and Texas Tech star Michael Crabtree in 2007.

While those two receivers were first-round draft picks, that won’t be the case for Sterns, who is one of the smallest receivers in the 2022 NFL Draft class and lacks the overall speed and explosiveness necessary in today’s game. However, he does profile as an end-of-the-roster option in the slot, where he can utilize his toughness, sure hands and general feel for route running and finding the soft spot in the zone to potentially develop into a No. 4/5 option moving forward.

Sterns lacks some of that burst and explosiveness into and out of his cuts that you’d like to see from a slot receiver. However, he does a nice job getting into the Army defender, using a powerful outside plant to burst back inside, cross is face and catch the in route. From there, he does a nice job staying on his feet, breaking the tackle and waltzing into the end zone for the score.

That’s pretty much Sterns’ game right there. He’s a sound possession receiver that can win his 1-on-1 matchups and move the chains.

Sterns have a very good feel for finding the soft spots in zone coverage, and he isn’t afraid to go into traffic to take a lick and make a catch. Here against Michigan State last season, Sterns does a nice job of working vertically but not running himself out of the soft spot in the zone. You can see him throttle down ever so slightly after clearing the Spartans’ defender, allowing him to sit int the zone just a bit, make the cats hadn’t take the hit from the safety for the key catch to move the chains.

I do like Sterns quite a bit out of the slot in a vertical passing attack. Though he does not have the speed to run away from guys at the next level, he can win with his route running overall, and his ability to track the football well in the air. Look at the way he sets the UTSA defender up on this slot fade from deep in WKU’s own end.

Once he sells the setup, he’s able to create enough separation down the field and tracks the football well down the sideline to make the basket catch. He should have kept running though, which leads to concerns about his ability after the catch. He’s not going to create much, and isn’t going to break many tackles. He profiles as more of a possession style receiver, which is perfectly fine.

That said, he did have some splash at WKU. Again, Sterns wins quickly on in-breaking routes, which seemed to be his bread and butter. He’s able to take away any sort of angle here from the Old Dominion defensive back, makes the catch in stride and then breaks that tackle before taking the crossing route to the house.

WKU did try and get the football to Sterns any way they possibly could on offense, and I could see a similar usage in the NFL, depending on his landing spot. Getting the football to Sterns in space is a nice way to let him try and manufacture some plays. Though he doesn’t offer a ton of speed or creativity after the catch, he’s a guy that can can move the chains when given the football, reminding me a lot of Albert Wilson.

While his tape historically doesn’t show many true signs of him making an impact after the catch, he did flash it some in the bowl game win over Appalachian State. Look at the way he’s able to pick through the defense on the short catch, breaking two initial tackles before working to the sidelines and scoring, breaking another tackle in the process.

Overall, Sterns’ numbers in his final year of college were certainly inflated due to the Air Raid offense he was in at Western Kentucky, but there’s a lot to like with Sterns overall, especially as a late Day 3/Priority UDFA guy that can work in the slot and catch the football consistently.

Sterns is not going to blow by any defenders and isn’t going to jump off the tape as an explosive player overall, but he’s quietly consistent, knows how to work himself open, and has strong, consistent hands. Add in his special teams abilities due to his punt returning at Houston Baptist, Sterns profiles as a fringe roster guy that could battle his way onto the back end of a roster in training camp and preseason due to his hands, much like Albert Wilson once did in Kansas City nearly a decade ago. That’s the comp I continue to settle on for Sterns.