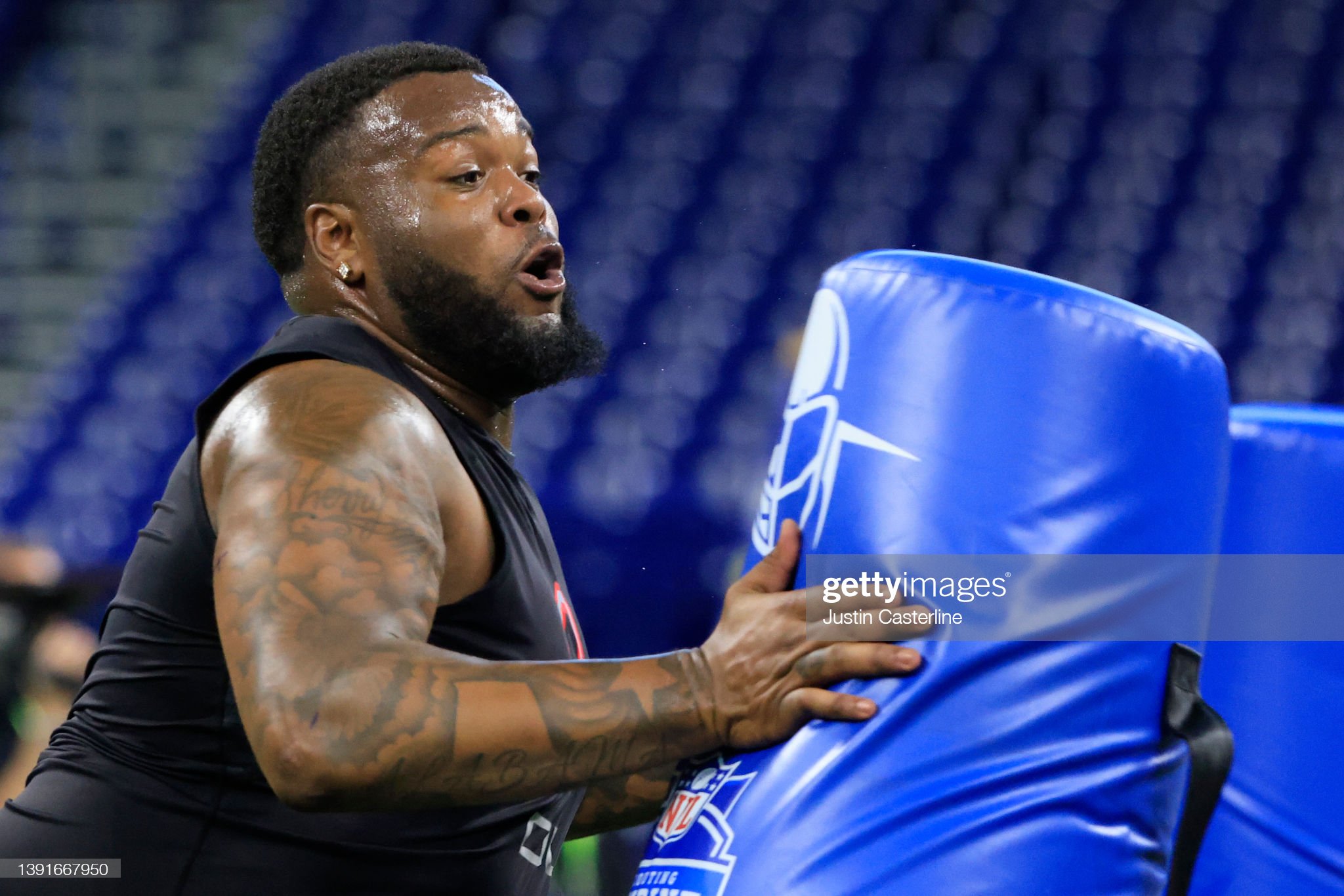 From now until the 2022 NFL Draft takes place, we hope to scout and create profiles for as many prospects as possible, examining their strengths, weaknesses, and what they can bring to an NFL franchise. These players could be potential top 10 picks, all the way down to Day 3 selections and priority undrafted free agents. Today, I’ll be profiling a defensive line prospect that was the man in the middle for an SEC defense but may be limited in terms of his contributions at the next level.

— Has good size and bulk for the position
— Girth allows him to occupy space as a run plugger in the middle
— Will get hands on the blocker to hold gaps and allow linebackers to run free
— Will attempt to swim over the blocker’s shoulder on the snap of the football
— Can move blocker off the spot to make plays on inside runs
— Will command double teams at times, occupying multiple blockers
— Does a good job getting on the blocker’s chest and peeking into the backfield to shed the block and make the play in the gap

— Lacks explosiveness and burst off the LOS
— Does have good open field speed or movement skills in space
— Doesn’t have the lateral movement skills and length to make tackles outside of his frame on runners attempting to evade him
— Get way too high, allowing offensive linemen to get a hold of his frame and stall his rush
— Poor pad level leads to lack of penetration or pushing the pocket
— Hot-and-cold when it comes to motor as a defender in pursuit
— Will attempt to spin off blocks, taking himself out of the gap, leading to big plays
— Doesn’t have a violent bull rush to knock back blockers with his punch
— Ends up on the ground far too often
— Will get too far up field when needing to maintain gap integrity, taking himself out of the play and creates a running lane
— Offers virtually nothing as a pass rusher
— Needs to improve his body composition to play more effectively and not have to be subbed out often

— Redshirt Senior from Mobile, AL
— Named a three-star prospect according to Rivals, 247Sports, Scout and ESPN and the #1 DT prospect in the state of Alabama
— Invited to the Alabama-Mississippi All-Star game
— Played center for the varsity basketball squad
— Appeared in 51 games, starting 21 times
— Played in five games off the bench as a true freshman in 2017 and recorded five tackles
—  Saw action in ten contests as a key reserve in 2018 and notched 23 tackles (ten solo), four TFLs, and 1.5 sacks
— Played in 15 games with three starts for the National Championship team and recorded 46 total tackles (15 solo) seven TFLs, three sacks, and a forced fumble
— Left the program in August of 2020 and spent a month away to help take care of his grandmother who was suffering from complications due to COVID-19, later returned before the start of the season
— Played in all 10 games with six starts in 2020 and registered 25 tackles (eight solo), 2.5 tackles for loss, a sack, a forced fumble, and a PBU
— Started all 12 regular season games in his final year of eligibility in 2021 and posted 45 tackles (20 solo), 9.5 tackles for loss, and two sacks
— Did not participate in the Texas Bowl to prepare for the 2022 NFL Draft
— Graduated in August of 2021 with a degree in interdisciplinary studies
— SEC Academic Honor Roll (2020 & 2021)

Neil Farrell Jr. from LSU decided to spite his home-state Crimson Tide as an Alabama native and opted to commit to the arch-rival LSU Tigers. Farrell saw the field right away as a true freshman in limited action, seeing his role expand every season, becoming a key member along the defensive line for the Tigers on their 2019 National Title run. After dealing with the adversity of his grandmother dealing with complications with COVID-19, causing him to step away from the team, Farrell returned prior to the start of the 2020 season and became a leader upfront for the defense, returning for a COVID year in 2021 which led to his most productive season.

When you watch Farrell, you see a big, strong, and powerful man in the middle of the defense. He has the brute strength to control blocks at the LOS and take up blocks to allow linebackers to run free to the football. Here is an example of this against Alabama where Farrell takes on the RG and opens a lane for #18 Damone Clark to shoot through the gap for the TFL.

Farrell not only does a good job of occupying gaps, but he can shed blocks and makes plays in run defense at the LOS himself. He does a good job peeking into the backfield, keeping his eye on the running back while staying engaged with the block, keeping position until the time is right to rip off and make a play. That is exactly what happens here on this rep against the Crimson Tide as Farrell contacts the center upon the snap, peeking into the backfield to locate #4 Brian Robinson and then reaches over the block to wrap up the runner in the opposite gap to make the play.

When he plays with good pad level and a low center of gravity, Farrell can generate a strong push of the pocket and shock blockers backward with his punch on the snap of the ball. Watch this rep as Farrell knocks back the center right on the snap of the football, getting penetration into the backfield and takes down #28 Isaiah Spiller for no gain.

He has a decent get off on the snap and has the upper body strength to toss blockers to the side with one arm. On this rep against Auburn, watch Farrell get a good jump on the snap and chucks the blocker to the ground as he regains his balance in the gap and pounces onto the back in the backfield, swinging him down to the ground for the TFL.

While he doesn’t always generate the greatest pass rush from the interior, Farrell plays with an awareness that we see in his run defense to be cognizant of getting his hands up in passing lanes once the ball it thrown to make it more difficult for QBs to complete passes as well as potentially bat down passes. That is exactly what happens here on this play against the Aggies as Farrell fails on the spin move but gets his hand up to knock down the pass at the LOS for the PBU.

Farrell has often been regarded as one of the emotional leaders of the team the last couple of seasons, taking that leadership in the locker room and transferring it to the football field. That leadership often leads to good effort on the field as we see on this pursuit by Farrell from behind on the big run, chasing the runner down the sideline for nearly 40 yards with all-out effort as a teammate escorts the runner out of bounds.

Still, for being 330lb, Farrell shouldn’t be considered a dancing bear or nimble on his feet for a larger human being. He can easily be gassed and had to often be rotated in-an-out of the lineup with the Tigers to stay fresh. Here is one play where we see Farrell check out on his pursuit of the QB after his initial rush on the snap of the ball, standing straight up and jogs around as the rest of the defense chases after the passer on a critical fourth down.

Farrell also struggles with playing too high and upright at times right after the snap of the football, popping straight up into the air to give blockers an easy target to punch on his big torso. He also isn’t an accomplished pass rusher, often resorting to a half-effort spin move that is slow and easy to pick up. Here are a couple of examples of Farrell getting too high with his pad level and tries to spin off the block, compromising his gap integrity which leads to QB #10 Bo Nix scrambling for first down yardage.

Along with playing with poor, inconsistent pad level, Farrell can get too anxious and draft up field, taking himself out of the play and makes it easy for blockers to kick him out as he creates a large gap to run through. Here on this rep against Texas A&M, Farrell fights pressure to take on half a man of the center, but drifts too far up the field, failing to keep his shoulders square to the LOS as the center rides him into the pocket, clearing a big hole in Farrell’s gap that the runner shoots through for a successful run.

Overall, Farrell is a quintessential nose tackle as the next level that likely won’t provide much as a pass rusher and will be subject to playing early downs as a run defender. He has the size, strength, and power to occupy gaps and take on blocks to allow linebackers to run unimpeded to the football. While he has shown the ability to penetrate the pocket and shed blocks on occasion, he needs to be more disciplined and assignment sound to maintain his gap to prevent giving up big runs as well as play with more consistent pad level and motor.

When watching Farrell, my mind went to John Jenkins as a fair pro comparison for the defensive tackle prospect. Jenkins also played his college ball in the SEC, starring as the man in the middle of the Georgia defense back in 2013 before being drafted in the third round. He has similar height length, and athletic testing numbers while coming in just a bit heavier that Farrell (346lb). However, since then, Jenkins has dropped some weight and has been a steady contributor on early downs as a run defender that takes on blocks and uses his strength and power to make an impact up front.

I would foresee a similar impact for Farrell at the next level who likely is best served as a rotational player that primarily plays on run downs, but isn’t expected to contribute much in sub packages as a pass rusher. The Pittsburgh Steelers interviewed Farrell at the NFL Combine in March, suggesting that they may be interested in adding Farrell into the fold to improve their porous run defense from a year ago. However, given the limited upside Farrell has as a three-down contributor and the bodies Pittsburgh already has in the fold at the position, I would expect Farrell to be a name that they may consider near the end of the draft if still on the board.