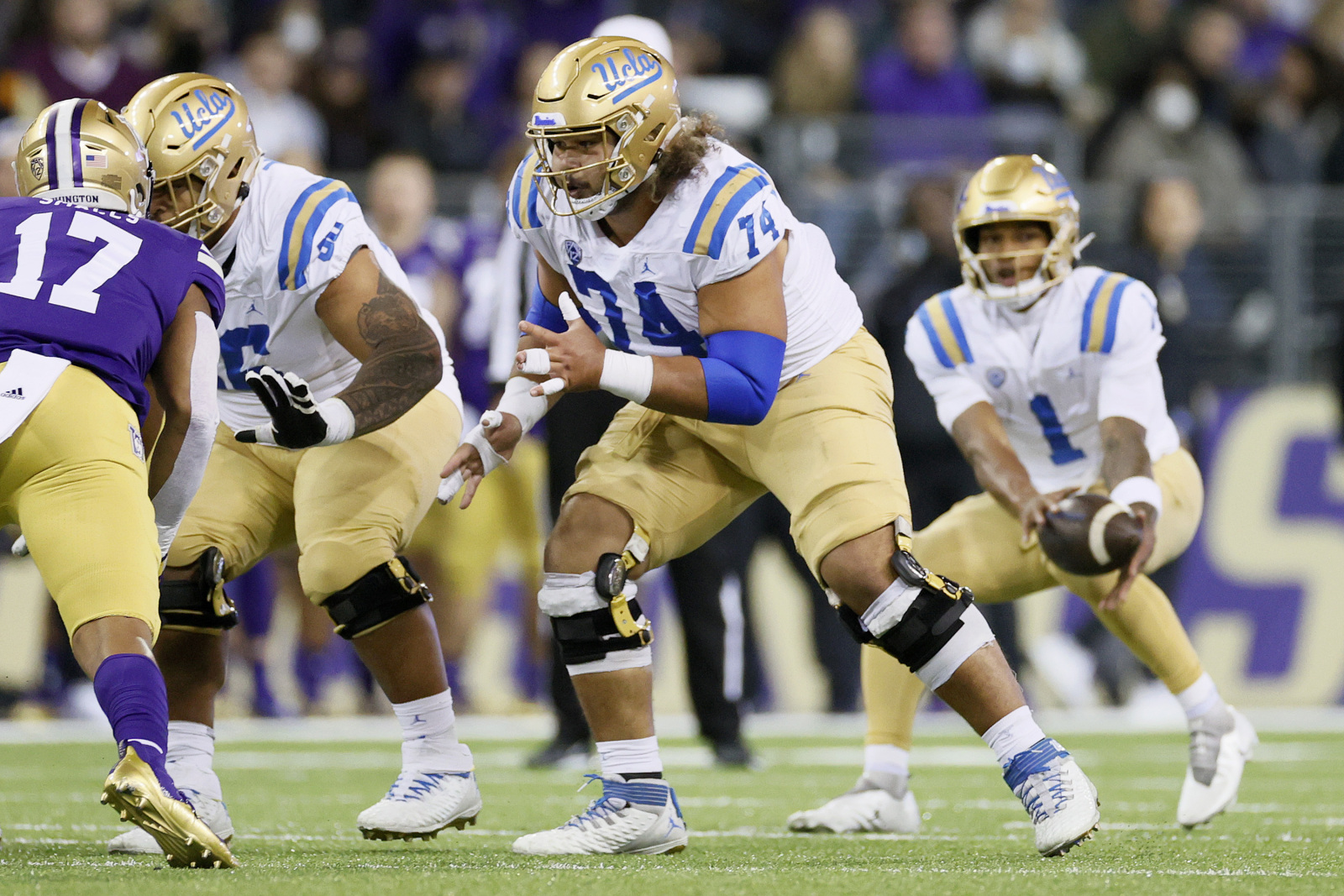 From now until the 2022 NFL Draft takes place, we hope to scout and create profiles for as many prospects as possible, examining their strengths, weaknesses, and what they can bring to an NFL franchise. These players could be potential top 10 picks, all the way down to Day 3 selections and priority undrafted free agents. Today, I’ll be profiling an offensive tackle prospect that has experience playing tackle since he stepped foot on campus and brings the size and nastiness to the position you like to see.

— Has great size on a dense, compact frame
— Barrel-chested that can be difficult to move off his spot
— Projects to be able to kick inside at the next level, offering positional versatility
— Large hands aid in his ability to latch onto and neutralize defenders
— Has a good base and anchor in pass protection to absorb the rush
— Can mirror defenders in pass protection and has a strong punch when he connects
— Has the athleticism to get out in space as well as pull across the LOS
— Play strength to halt the rush as well as displace defenders in the run game
— Recognizes twists and stunts upfront and can pass off defenders to pick up the other man running free
— Likes to aggressively finish his opponent into the ground as a run blocker
— Has a nice snatch trap move to cut down defensive linemen

— Lacks ideal arm length and wingspan, allowing defenders into his frame
— Will lunge forward on blocks, leading to whiffs
— Needs to sync up his hands and feet better at the top of the arc in pass protection to seal off edge rushers from getting the corner
— Can stand to hold his blocks longer
— Doesn’t consistently get a body on a man in space at the second level
— Has received plenty of false start penalties in college
— Will overset against speed rushers, leading to defenders crossing his face inside
— Doesn’t has the requisite foot quickness to recover when beaten to the corner on the pass rush

— Junior prospect from Ladera Ranch, CA
— His dad, Steve, was an International Moto-Cross professional, grandfather was a professional boxer
— Four-star recruit according to 247 Sports, Rivals.com and ESPN.com and #1 OL in CA in 2019 class
— Set school record for shot put (63 3 1/2) and discus (155-5)
— Silver medalist for Triton Rugby Club at the 2016 SoCal Youth Rugby State Championship and qualified to play for the high school feeder team for the Olympic USA Eagles Rugby Team
— Saw action as a starter in all 12 games as a true freshman at left tackle
— Starter at left tackle in all seven games in 2020 during the pandemic-shortened season
— Starter in all 12 games at left tackle in 2021
— First-team All-Pac-12 (2021), 2019 USA Today & The Athletic Freshman All-American
— Honor Roll Fall 2021 and Spring 2020, Geography and Environmental Studies major

Sean Rhyan came out of high school as a decorated multi-sport athlete, exceling on the gridiron as an all-state offensive lineman, on the pitch as a youth rugby star, and in the throwing ring as a school record holder in the shot put and discus. His immense physical talents translated right away at UCLA as he was thrust into the starting lineup as a true freshman, logging 31 starts in three seasons with a majority of those starts coming at LT. After getting a first team All-PAC 12 nod this past season, he elected to forgo his senior year and declare for the 2022 NFL Draft.

When you plug in the tape on Rhyan, you see a stout, dense offensive lineman. He has great size and a strong, wide base allowing him to anchor well against the rush as well as generate a push as a run blocker. He is physical at the point of attack and plays with a noticeable aggressive demeanor, looking to knock defenders back or take them to the ground any chance he can. He is a good example against Oregon where Rhyan goes up against #5 Kayvon Thibodeaux and does a great job chucking him to the side as he gets his right arm on Thib’s outside shoulder to knock him off balance, clearing a running lane as Rhyan moves the defender out of the way.

Here against Arizona State, we see a similar trend as Rhyan quick sets the edge defender, jumping out of his stance to attack him and toss onto the ground to clear a runway for the QB on the keeper. Rhyan then shows off his athleticism, hurdling over a defender on the ground and runs downfield to pick up another block on the successful QB keep.

Rhyan pairs his athleticism with high effort as a blocker in the run game, having the ability to work to the second and third levels of the field to find work and clear out linebackers and safeties. On this rep against Arizona, we see Rhyan chip on the defensive lineman as he climbs to pick up the backer in the box, proceeding to run with him across the field to push him out of the play and away from the runner.

Rhyan’s nastiness as a blocker also comes out in his well-versed snatch trap move as he will get inside the defender’s shoulder pads, then will yank him down to the ground and finish on top of him for the pancake block. We see exactly that on this rep against the Wildcats as Rhyan slams the defensive lineman to the turf and violently body slams him for good measure.

Rhyan’s thick build and play strength make it difficult for edge rushers to knock him off his spot when in pass protection. When he is squared up with defenders coming off the edge, Rhyan does a good job latching onto them and neutralizing the rush, having the sturdiness and hand strength to end their pursuit of the QB. Here are a couple examples of Rhyan doing a great job neutralizing the pass rush against the Ducks, keeping the pocket clean as a pass protector.

Still, there are some areas of Rhyan’s game that need work if he is to prove to be a reliable starting option at the next level. While he has the athleticism to work up to the second level and get out in space, Rhyan lacks the foot quickness and lateral change of direction ability to pick up defenders consistently out in space. Here are a couple of examples where Rhyan locates his assignment but can’t square up the defender that evades him in the open field to continue pursuit of the ball.

His lack of foot quickness also shows up as a pass protector when he needs to keep defenders from turning the corner around the arc of the pocket. On this rep, we see Rhyan maintain good position out of his stance in pass protection, but he stalls his feet and lunges into his block rather than maintaining good hip and knee bend and punches with arms extended. This leads to the defender getting around his outside shoulder and gets involved on the strip sack by his teammate Thibodeaux.

Rhyan also falls to the habit of occasionally dropping his head and lunging forward on some of his blocks, resulting in him playing over his pads which leads to whiffed block attempts. We see that on this rep against RDE as Rhyan shots his hands and ducks his head, allowing the defender to win around the edge and flush #1 Dorian Thompson-Robinson from the pocket.

Overall, Sean Rhyan is a battle-tested offensive lineman that has shown the propensity to be a solid run blocker and a capable pass protector should he clean up some technical issues in his game. His size and frame suggest he may be a better fit inside as guard where his shorter arms and lack of foot quickness would be as exposed as it would be playing out on the edge. However, given his skill set and athletic traits, teams could draft him as a tackle and see if he can stick, but move him inside to guard should it not work out on the outside. Teams that are more run heavy and play a power/gap blocking scheme would be ideal fits for Rhyan at the next level, either at tackle or guard.

Another player that had a similar transition to the league that came to mind as a pro comparison for Rhyan is Miami Dolphins OL Robert Hunt. Hunt came out of Louisiana Lafayette where they had been excelling on the ground as of late, churning out NFL-caliber RBs and OL including Hunt himself and current Steeler Kevin Dotson.

Hunt shares a similar big, stout frame as Rhyan (6’5 1/8, 323lb) with average arm length (33 1/2”) making him a player that can play inside or outside. He starred at tackle in college, and played some there in the league, but has since made his way to guard where he figures to be a capable starter as a mean, physical run blocker, but needs to continue to develop as a pass protector.

I foresee a similar path to the pros for Rhyan as teams should look at him as a tackle first and can probably move him inside where he will be a capable starting option for years to come should the transition to the league at the tackle spot not work out. Pittsburgh could use some help fortifying the offensive line at both tackle and guard, but when I spoke to Rhyan at the NFL Combine, he said that he had not spoken to the Steelers at that point in time. Still, should he be around in the middle round of the draft, he is a name that makes sense based on the need and the skill set he provides.