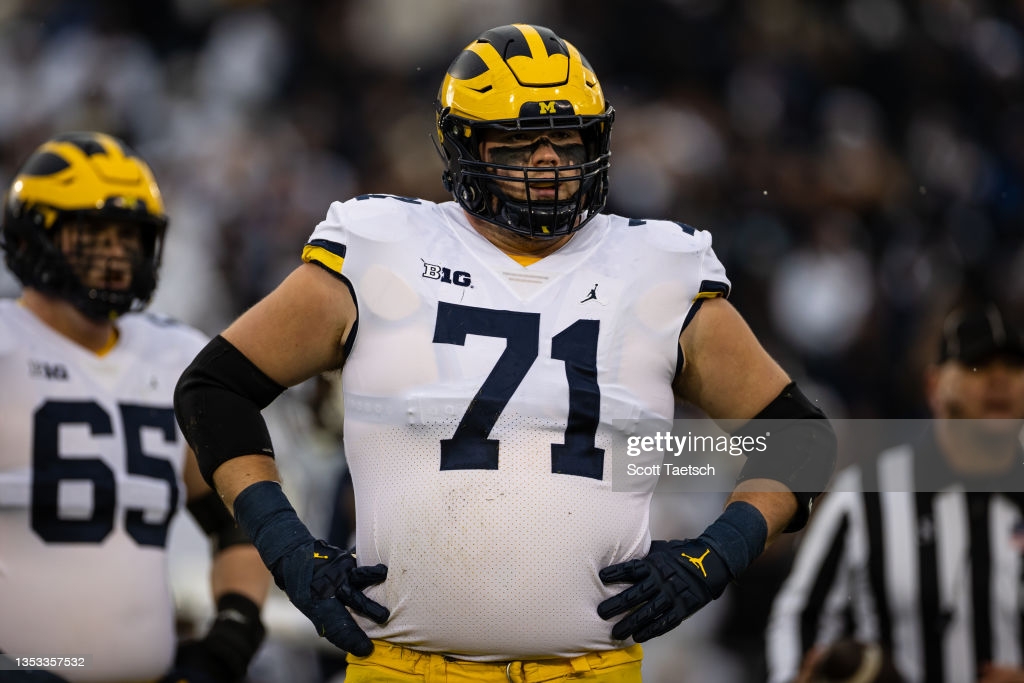 From now until the 2022 NFL Draft takes place, we hope to scout and create profiles for as many prospects as possible, examining their strengths, weaknesses, and what they can bring to an NFL franchise. These players could be potential top 10 picks, all the way down to Day 3 selections and priority undrafted free agents. Today, I’ll be profiling an offensive lineman from the Big Ten.

Andrew Stueber is a grad student from Michigan with experience start at right tackle and guard. He has very good size and length and was a part of the Michigan offensive line that was awarded the Joe Moore Award that is given to the best offensive line.

As a pass blocker, he used primarily vertical sets and played with good pad level and solid balance when getting into his set. His hands are patient, work independently; he effectively uses chops to keep rushers off balance and has good timing and placement. Against bendy, speed rushers he uses his length well to push them up the arc and past the quarterback. When taking on power rushes he uses is good play strength and core strength resulting in a good anchor to hold the pocket.

We’ll start with a few clips of him using his length and pushing rushers up the arc.

These clips are of his anchor handling power rushes.

He had solid mental processing and handled looping and blitzing linebackers well. When uncovered he actively looks for work and to help teammates. On screen plays he displayed solid mobility to get out in front and get his hands on second level defenders.

As a run blocker, they ran primarily Gap/Power scheme which fit him nicely. He has good snap quickness and is good on down and double team blocks and this is where he gets the most movement with good pad level and leg drive. He has solid mobility when pulling to either side and is good at locating his target and getting a hit on them. On inside runs on base and hinge blocks he positioned himself well to use his play strength to wall off the defender. When the used an off-balanced line he would flip to the left side and line up at left tackle and was usually tasked with down blocks.

Here are three clips of him blocking to the inside. The second play he is on the left side. He gets the most movement and push on these types of blocks.

Next is a couple plays of him pulling, one in each direction. Location of the target is good, sustain of the first block could be better.

His initial step in his kick slide is short minimizing the depth he gets at the snap. Getting into his set his shoulders are bit forward putting his weight slightly over his toes. Counter rushes to the inside challenge his change of direction and ability to mirror the defender and force him to overreach. Overall, he was adequate with his mental processing and timing on stunts to pass off penetrators and pick up loopers but did look better later in the games watched. He did get some help occasionally with RB’s chipping on his side. On combo blocks he was late getting off the initial block and making him hit or miss on the second level. On outside Zone runs he didn’t consistently get across the face of the defender. Overall, his sustaining of all blocks could be better.

Here are a couple of the not-so-good pass pro reps. The first is a T-E stunt that he doesn’t recognize. The second is an inside move in which he tries to recover.

Vs Iowa, here is a clip of him late to the second level and his man makes the tackle. I saw this happen enough that it could be a concern.

Overall, Stueber has very good size and length with experience starting on the right side of the line. He gets good movement on down and double team blocks and is an effective puller to either side. On inside runs he stalemates with his blocks and has solid mobility on screens. He uses his length on speed rushers and has a good anchor versus power rushers.

Areas to improve include fine tuning his pass set technique, handling counter rushers to the inside and his mental processing on twists by the defensive line. He could also work to improve his lateral agility, his timing and effectiveness on second level blocks as well as overall block sustain.

Michigan churns out NFL level offensive lineman and Stueber will join them this season. Having some position flexibility is a benefit but I think he will be viewed as a tackle at least initially. His best fit is in Gap/Power run scheme and would benefit from a year to improve with the potential to develop at right tackle. For a comparison I’ll go with Cameron Fleming who has similar measurables and has carved out a career as a part time starter.

Games Watched: 2021: At Michigan State, At Penn State, Vs Ohio State, Vs Iowa