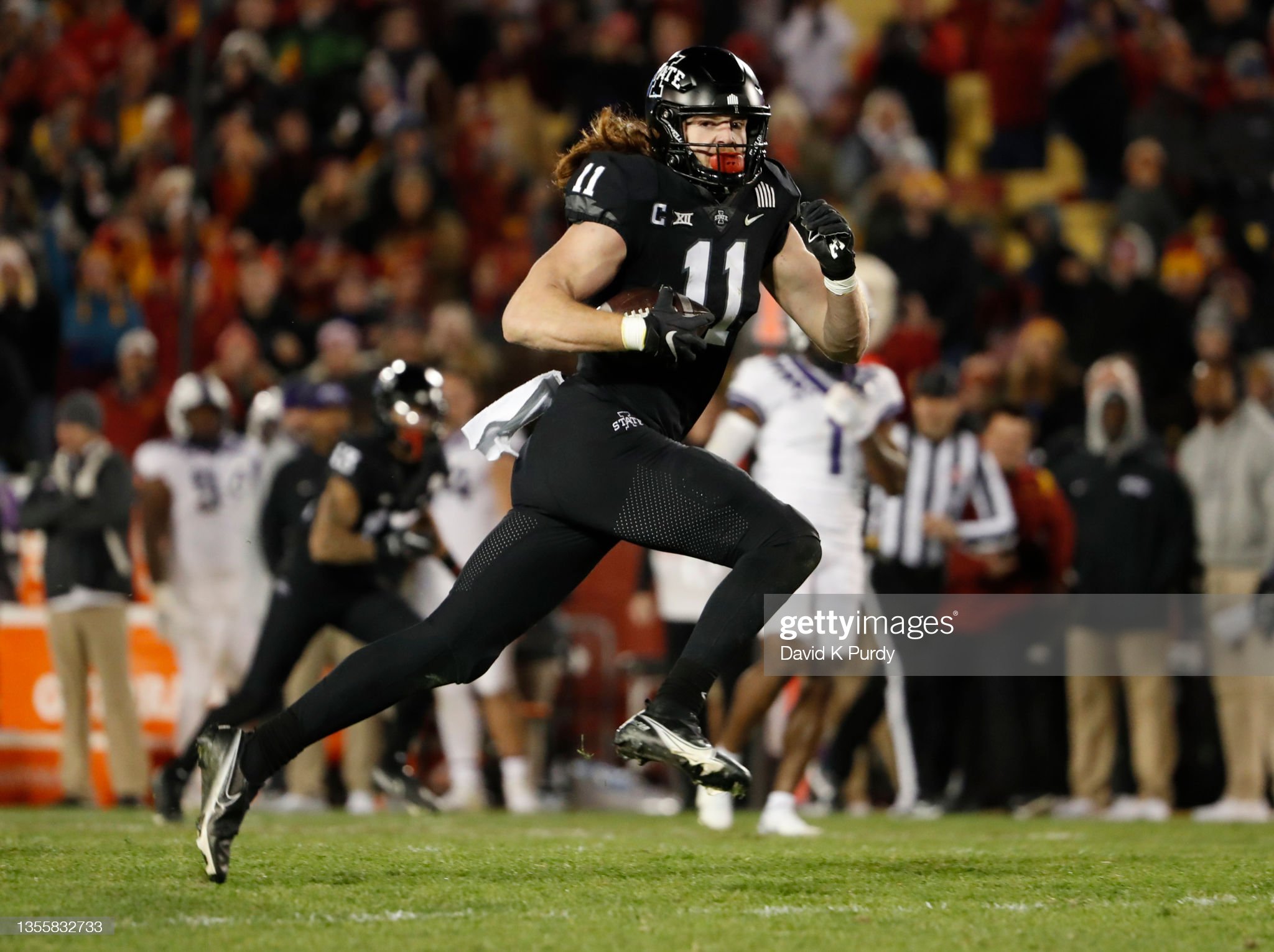 — Has great height and arm length you look for in an NFL TE
— Has aligned in-line, at the H-Back, in the slot, and out wide in the Cyclone offense
— Can get up to speed in the open field
— Has the size and leaping ability to be a quality red zone/possession style receiver
— Best used on PA rollouts to get him out in space
— Has strong hands that allow him to make combative catches in traffic
— Reliable check down receiver on drags route concepts and comebacks close to the LOS
— Will try and fight for extra yards after the catch
— Gives great effort as a blocker, looking to latch on and drive defenders back
— Will look to attack defender’s chest with his punch

— Thin lower half can give him fits when engaged with defenders as a blocker
— Lack of functional mass and strength leads to him being on the ground a lot
— Can be easily shed off his blocks by bigger, stronger edge rushers and linebackers
— Can do a better job sustaining blocks past initial contact
— Could stand to play with better hip and knee bend to have a better base as a blocker
— Lacks the speed, burst, and explosiveness to challenge defenses as a receiver
— Doesn’t have the quickness or acceleration to be elusive after the catch
— Will fight for extra yards on contact, but lack of mass in lower half limits leg drive
— Telegraphs his routes and isn’t sudden out of his breaks
— Will get blanketed often by linebackers and safeties tasked with covering him
— Most of his big catches came wide open on play action looks
— May have a tough time winning more of those 50/50 balls at the NFL level
— Will be a 25-year-old rookie that has never topped 300 yards in a season

Chase Allen is an example of a guy that committed to the process since entering college, steadily improving to make himself an NFL Draft hopeful. Allen comes from an athletic family with his brother and sister both D-I athletes and his father being a former QB for Northern Iowa and has been a college head coach at the D-I level for three separate programs. Combine that with the fact that Allen starred as a three-sport athlete in high school, earning all-state honors at football, basketball and as a javelin thrower on the track and field team, you could say that playing sports at a high level runs in the Allen family.

When you watch Allen on tape, you see a tall, long athlete that fits the mold of an NFL-style TE from a size standpoint. He has the basketball background to body up smaller defensive backs paired with the hands to make catches in traffic, making Allen a viable red zone/possession down threat. Check out this reception against Texas Tech Allen makes while draped by the defensive back, securing the grab as the defender tries to drag him to the ground, fighting for extra yards after the catch.

We see a similar play on this reception against Oklahoma as Allen leaps up to get the jump ball in the air and then turns into a runner after the catch, dragging a defender behind him as he runs to the end zone, putting his shoulder down and drives his legs on contact as he crosses the goal line for the score.

Allen’s size and catch radius also make him a viable check down option close to the LOS, giving his QB a big target over the middle for those high percentage completions. Here is an example against the Oregon Ducks last season in the Fiesta Bowl, running the short comeback route by dropping his shoulders and chopping his feet to break back to the ball as the ball is thrown. He gets up field and fights for additional yardage after the catch, coming just short of the line to gain on first down.

Allen seems to do his best work when operating out in space on misdirection like play action rollout passes on jet motions. This gives Allen a little bit of runway to get going, having more buildup speed rather than instant burst or acceleration after the catch. Here are a couple of examples of Allen using a jet motion or a rollout passing concept to his advantage to get open with green grass in front of him to pick up additional yardage after the catch.

Allen also uses his length to his advantage as a blocker, often being used both in-line as a traditional TE as well as in the slot or out wide to spring running backs on outside runs or when asked to pick up defensive backs in the screen game. He will try and land his punch inside the defender’s cheat and will display good effort as a blocker like we see on this rep against the Ducks, taking the edge rusher and runs him backward away from the play.

Still, while Allen shows plenty of effort and want-to as a blocker, he lacks the requisite bulk and play strength to be a high-end performer in this facet of the game. He has a slender lower half and can easily thrown off balance and shed by bigger, stronger edge rushers and linebackers. Here is an example where Allen does well at the beginning of the rep on the double team with the LT, but then gets tossed by the defender after the tackle leaves to pick up another defender.

This lack of ideal lower body strength and balance also often leads to Allen ending up on the ground a fair amount as a blocker, as we see on this rep where he does a good job engaging the edge defender on the snap of the football, but then gets yanked forward by the defender’s right arm as the defender swims over his head with his left. This causes Allen to stumble forward, and ultimately gets tossed to the ground.

Along with the lack of functional strength and mass, Allen lacks the requisite foot quickness and agility to work in space both as a blocker as well as a route runner. He struggles to generate separation in coverage, often relying on getting schemed open via rollouts or will utilize his big frame to try and win contested catches on most of his targets. On this screen pass to the receiver in the stack formation to the left, we see Allen struggle to pick up the defender as a blocker, pausing his feet and reaches with his hands, thus allowing the defender to blow past him and get in on the tackle attempt.

Overall, Chase Allen has some of the physical traits including length, height, and the ability to provide a bigger presence in contested catch/red zone situations as a receiver to make teams consider adding as a back-end of the roster TE. He is a willing blocker, both in-line and split out wide, but lacks the necessary bulk and play strength to be a difference maker in the ground game. He is easily thrown off blocks and can struggle to maintain his blocks for long periods of time. Allen also lacks high-end athleticism in terms of play speed, explosiveness, and quickness to excel as a pass catcher, being inconsistent at creating separation as well as make anything happen after the catch.

When watching Allen, former Stanford TE and current Seattle Seahawks TE Colby Parkinson came to mind as a logical pro comparison for Allen. Parkinson too share a long, slender frame (6’7 1/4”, 252lb) more resembling a pumped up WR that a traditional in-line TE. He also lacks ideal athleticism in terms of speed and quickness but does well using his height and frame to make contested catches in traffic and give his QB a large target in the middle of the field. Parkinson was drafted by Seattle in the fourth round of the 2020 NFL Draft, and while I do think that would be quite rich for Allen, I think he may have a similar role in the league if he makes a roster.

The Pittsburgh Steelers spoke to Allen at the NFL Combine last month according to my own conversation with Allen, thus there may be some interest by Pittsburgh to add Allen at the end of the draft of as a UDFA should he go undrafted. He will have to prove himself a more consistent blocker and a special teams ace at the next level to stick on an NFL roster as a likely TE3 for a team, but Allen has the measurables and football character that teams are willing to take a shot on.