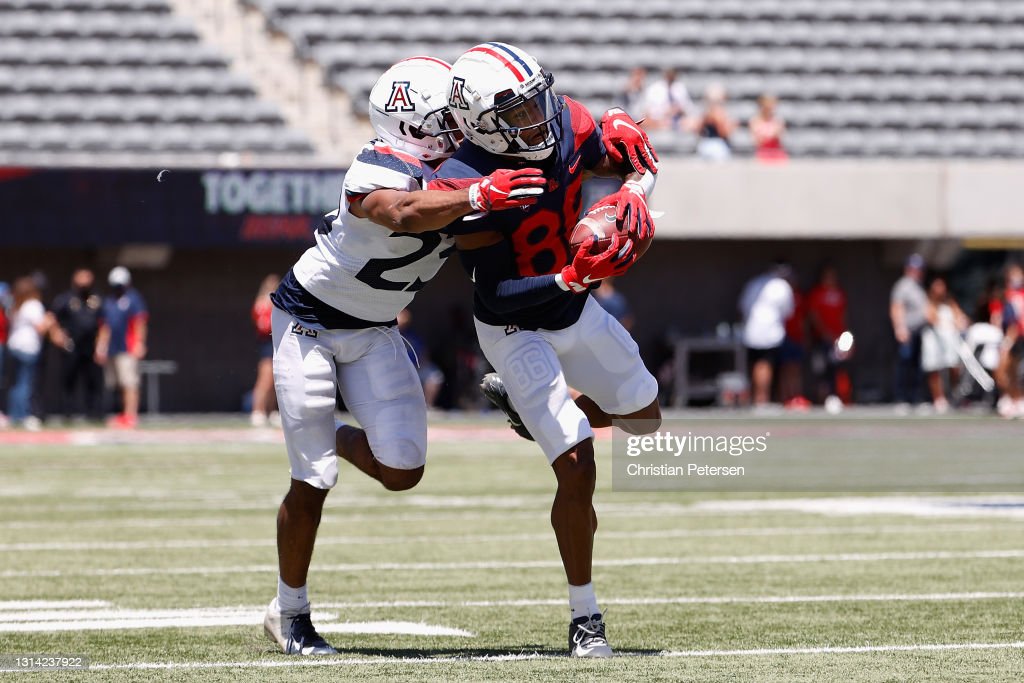 From now until the 2022 NFL Draft takes place, we hope to scout and create profiles for as many prospects as possible, examining their strengths, weaknesses, and what they can bring to an NFL franchise. These players could be potential top 10 picks, all the way down to Day 3 selections and priority undrafted free agents. Today, I’ll be profiling Arizona WR, Stanley Berryhill III.

— Smooth route-runner makes everything look easy in his movements
— Accounted for 27% of Arizona’s receiving yards in 2021
— Quick feet help with getting off the line in press and making people miss in short area’s
— Shows the fortitude to make the tough catches over the middle
— Solid hands saw no drops in games watched, rarely lets ball into body
— High effort / high motor player
— Not afraid of lowering the shoulder after the catch
— Plays with passion, would be easy to lose playing on a poor team, it’s always there
— Has ability in the punt return game, had a 51-yard punt return in 2021
— Team captain in 2021

— Small, but compact frame
— Height and short arms limit his catching radius
— Don’t necessarily see the 4.45 speed on tape, more quick than fast
— Shows ‘want-to’ in blocking but length limits his ability to be effective in the running game
— Struggles against longer corners at the line
— Averaged under 10 yards per catch final two years at Arizona
— Can make a guy miss, but never will be that dynamic after the catch
— Not someone you’ll want consistently on the outside, limited to slot role

— Played in 37 games with 13 starts at Arizona
— 139 catches, 1477 receiving yards, 10.6 yards per catch, 9 receiving touchdowns in his career
— Returned punts in 2021 – 18 returns, 156 return yards, 8.7 yards avg.
— 2021 First-Team All-Pac-12 (all-purpose), Honorable Mention as a wide receiver
— 2021 Burlsworth Trophy nominee (Most outstanding CFB that was a walk-on)
— Finished 11th all-time in receptions in Arizona history
— Was only the sixth player in school history to have 80 catches in one season
— Scored a touchdown four different ways in a single game in high school
— Majored in Literacy, Learning & Leadership

Stanley Berryhill III is a former walk-on at Arizona that developed into a team captain and receiver that was able to account for 27% of the team’s receiving yards in his final season in Tucson. Unfortunately, much of his production was kept under the radar due to a COVID-shortened Pac-12 season in 2020 and playing on an Arizona team that was 1-16 Berryhill’s final two years. I don’t think it would be much of a stretch to assume Berryhill was the best player on this team, let’s dive into some of his tape and see why.

Standing at roughly 5’10” 182 pounds, you’ll need to have some sort of quickness to your game to be successful as a wide receiver. Berryhill is more than sufficient in that area. He’s a smooth route runner, all of his movements look very easy and fluid. Due to this, he can create natural separation on routes from the slot due. Below, are two clips of him doing just that. In the first clip, I love how he’s able to snatch the ball out of the air cleanly, something you see consistently throughout his tape.

Piggybacking off his quickness, it also helps Berryhill after the catch. While he’ll never be super dynamic after the catch, he certainly can make a guy or two miss on his way to a first down.

As previously, noted, Berryhill isn’t the biggest player on the field, but don’t tell him that. He’s shown a few highly impressive contested catches on his tape. The first clip against Arizona State, is my favorite play I’ve seen from him. He’s able to high-point the ball while torquing his body in the opposite direction to keep the ball safe from the defender as he lands on the ground in bounds. Great rep.

Berryhill is a tough S.O.B., which you’ll need to be if you want to bring a 182-pound frame across the middle of the field in the NFL. Below, on 4th & 5, love that he’s smart enough to power down in the open zone ahead of the sticks. Then, he’s able to bring in the ball knowing he’s about to get hit, and still power for a few extra yards of forward progress.

Furthering the point, Berryhill isn’t going to be one that shies away from contact. On this jet sweep, he sees the corner squaring him up and lowers his shoulder to run through him, drawing a defensive targeting flag in the process. Personally, love the passion you see from him as well after the play is over. Definitely has a screw loose upstairs that you love to see in a football player.

One of the few knocks I’ll have on Berryhill’s game is that his length definitely will limit him. He only has 30-1/2″ arms, combine that with his height, and it really limits his catch radius.

I also noted that Berryhill shows the ‘want to’ in the blocking game, but will always struggle due to his lack of length that gives you the ability to stick with guys. I don’t necessarily think this is an awful rep from Berryhill as the ball-carrier bounces this run outside, allowing the defender to shake Berryhill. Nothing left that he could do other than hold, so he rightfully let go. However, I would like him to finish the rep and find work elsewhere instead of just running out in front of the play, could have easily gotten a hat on #15 if he didn’t choose to be a spectator.

With Berryhill likely being pigeonholed to the slot position at the next level, it’s important to have something extra in your game to help you stick to an NFL roster. He does have a decent punt return resume, averaging 8.7 yards per return in 2021 with a long of 51 yards.

Overall Berryhill, is a solid football player that likely was hindered a bit by being on such a bad college football team. It’s hard to stand out much when the entire team around you isn’t very good. He was largely used on underneath routes during his final two years and had to try to make the most of it.

His combination of quickness and toughness largely reminds me of Ray-Ray McCloud out of Clemson. I think he certainly has a place in the NFL if he can cut his teeth as a return man before moving into some sort of role as a slot receiver for a team. It may take a year or two for him to find the right opportunity though.