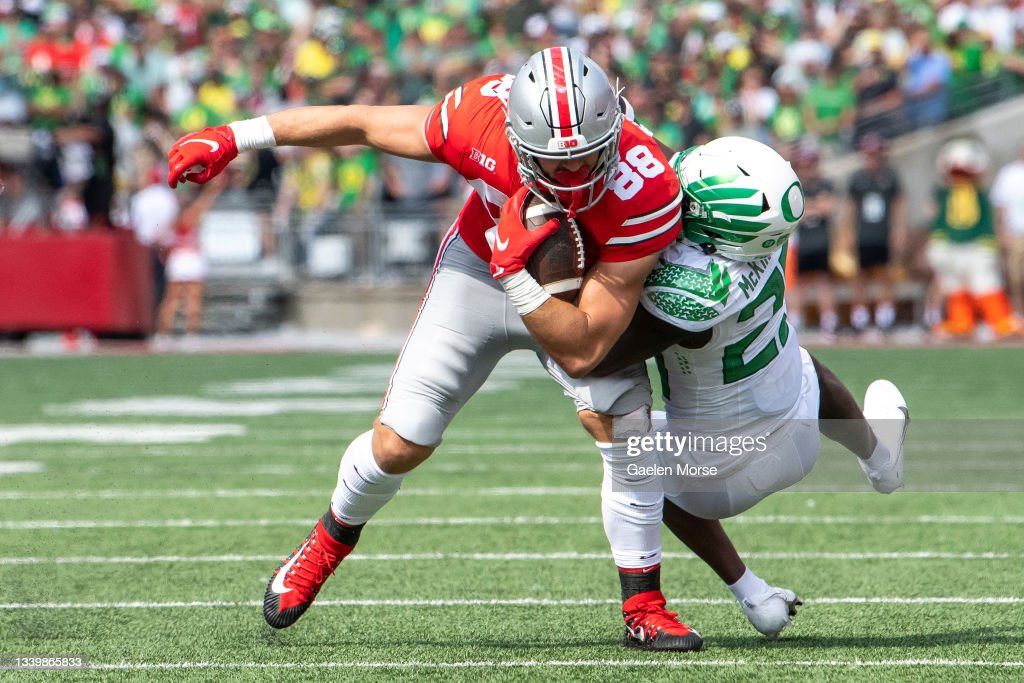 — Possesses the height and size you look for in an NFL TE with a filled-out frame
— Has good play speed and explosiveness as a receiver
— Has the size and leaping ability to win contested catches in the end zone as well as on possession downs
— Size and strength give ability to break tackles and pick up additional yardage after the catch
— Has natural, sure hands as a pass catcher, making some impressive one-handed snags
— Length and size paired with his explosiveness give him a strong catch radius
— Can work down the seam and track the ball well while getting a step on coverage linebackers
— Displays promise as a route runner when split out in the slot despite limited usage in college
— Does a good job getting up on a defender’s cushion before breaking out of his route
— Has experience playing in-line, as the H-Back, as well as split out in the slot
— Well-utilized on motions to get him open in the flat and run after the catch
— Aggressive blocker that wants to run his face through defenders on contact
— Will battle defensive ends and edge rushers in the run game and when asked to stay home and pass protect
— Well-utilized on pulls across the LOS to clear out defenders on the edge

— Lacks elite deep speed or initial burst to threaten defenses as a dynamic athlete
— Has some shake, but isn’t very elusive after the catch
— Uses his body to create space rather than being a proficient route runner to create separation
— Will occasionally double catch the football, leading to ball security issues
— Comes in too fast as a blocker, lunging into blocks causing him to whiff on the attempt
— Needs to do a better job sustaining his blocks rather than having defenders fall off after first contact
— Will allow defenders to cross his face as a blocker, taking a straight path to the ball
— Will have to play more controlled with better base and consistent punch as a blocker to play in-line at the next level

— Senior Prospect from Lindenhurst, NY
— Born August 11, 2000 (age 21)
— 2017 New York State Gatorade Player of the Year and USA Today first-team High School All-American, played in the U.S. Army All-American Game, and participated in The Opening in Beaverton, OR
— Was rated the top tight end prospect in the country before signing with Ohio State
— Played in 12 games as a true freshman, but only made one catch for 13 yards
— Started three contests in 2019 where he caught 14 passes for 142 yards (10.1 per rec.) and four scores in 14 appearances
— Played in five games during a pandemic-shortened 2020 season and caught 13 passes for 151 yards (11.6YPR) and five TDs
— Played in 12 games as a senior with ten starts and had 26 receptions for 309 yards (11.9YPR) and three TDs
— Was invited to the Senior Bowl, but suffered a plantar fasciitis injury in his foot, preventing him for testing at the NFL Combine and his Pro Day
— Named a captain four times by the Ohio State coaching staff
— Honorable mention All-Big Ten (2020 & 2021)
— OSU Scholar-Athlete (2018-2020) and Academic All-Big Ten (2019 & 2020)
— Major in human development and family science

Jeremy Ruckert was the man coming out of New York as a college recruit, being recognized as a four-star prospect and the #1 TE by several recruiting services. He ended up going to Ohio State where his role as a pass catcher never fully materialized to the promised he showed coming out of high school.

However, this shouldn’t be seen as a knock on Ruckert the prospect, as he has shown on several instances that he can be a quality passing game option for an offense when given the opportunity. All you must do is go back to the CFP in 2020 and see some of the impressive catches Ruckert had against Clemson and Alabama like this one-handed snag made while running down the seam against #8 Christian Harris.

Ruckert is a big, strong, athletic TE that boasts the body type you look for in prospects making the transition to the next level. His height, size, and ability to track the football make him a viable weapon down the seam like we saw on the previous play, and we see on this play against Penn State from this season. Ruckert lines up in the slot to the left and gets right on top of the defender in coverage, putting him in a bind as he gets an inside release, catching the pass in-stride as he takes the ball well into field goal range at the end of the game.

The Buckeyes benefitted from having an embarrassment of riches at the TE position the last several years, making Ruckert often an afterthought in the passing game. Still, when he saw targets come his way, he produced the way you would like to see from an NFL-caliber TE. Watch this rep where Ruckert lines up in the slot to the right and stems a post corner route to the sideline, getting right into the safety’s cushion as he breaks out of his route, getting a step on the coverage and catches the ball with outstretched hands to get up the sideline before #1 Jaquan Brisker knocks him out of bounds.

His height and size allow make Ruckert a good weapon to target in the red zone when the offense is close to scoring range. He has a large catch radius paired with the explosiveness to leap up and go get the jump ball in contested coverage. Here against the Hoosiers, we see Ruckert get off the jam and run to the end zone, leaping up and securing the catch to his shoulder as the defender attempts to knock the ball away for the TD. Ruckert could have secured the catch better with his hands, but he still manages to hold onto the ball with the defender’s hand lodged in there for the score.

While Ruckert is capable or work down the field and in the red zone as a receiver, he also is a viable safety valve as a check down option near the LOS. He does a lot of work on motion to get him open in the flat and possesses the size and strength as a runner to pick up extra yards after the catch. Check out this play where Ruckert starts blocking at the LOS, but whips back out as a receiver, providing #7 C.J. Stroud a check down option as he runs to the sideline. Ruckert catches the pass and urns up field, stiff arming one defender and runs through three others to fall forward and pick up the first down.

When it comes to blocking, Ruckert is an aggressive blocker that likes to stick his nose into the fray and move people backward. He tends to be a real mismatch on defensive backs when he squares them up like on this play against Penn State, coming out on the jet motion to pick up a block for #5 Garrett Wilson on the screen pass. He locates to outside CB and turns him away from the ball, allowing Wilson to get up field and move the chains.

His effort cannot be questioned as he will fight with defenders to and through the whistle. Here are two good examples of Ruckert’s effort and aggressive demeanor as a blocker against two potential first round picks at EDGE: Purdue’s George Karlaftis and Penn State’s Arnold Ebiketie.

Still, Ruckert has a lot to clean up from a blocking standpoint if his is to be trusted as a quality starting option in the league. He tends to be overaggressive as a blocker; coming in way too fast and uncontrolled which causes him to lunge forward into blocks, thus resulting in plenty of missed attempts. Here is one example where Ruckert goes across the LOS from the H-Back position to pick up the defender on the edge, running with his head down and shoulder over his toes. He chips the defender a little, but largely rights right past him on what could be a highlight block.

Here are a couple more examples form the same game of Ruckert failing to maintain his block or overrunning the block itself, playing with poor overall positioning and lacking the base and punch to drive defenders back after initial contact.

Here is yet another example against Penn State where Ruckert takes on the defensive back on the RB screen to the left, failing to get good hand placement on the defender and square him up in space. This causes Ruckert to overextend in attempt to drive the defender to the sideline who ultimately tosses Ruckert aside, using his own momentum against him as the defender sheds the block and makes the play on the football.

Overall, Jeremy Ruckert is a physically gifted TE prospect that has been underutilized as a receiver in college and has the room to grow into a capable passing game option in the league. He has shown promise as a blocker as well but needs to play more controlled and better execution of technique to prevent blown assignments like he had at Ohio State. While not a freak athlete, Ruckert can play all spots asked for a pro-style TE, having the size and stature to line up in-line, at the H-Back, as well as in the slot He would be best served to come in as a backup/reserve TE where he can continue to develop as a blocker and receiver as he contributes on special teams.

When watching Ruckert, I immediately got the vibe of Dallas Cowboys TE Dalton Schultz as a realistic pro comparison for him. Schultz also comes from a traditional powerhouse program at Stanford where he too didn’t see a lot of action as a receiver in college, but had the skill set to see the role expand in the league. He has similar measurables, although on a slightly leaner build than Ruckert, and started out his career as a backup in Dallas after being selected in the fourth round of the 2018 NFL Draft. He ended up seeing extensive playing time the last two seasons due to injuries in-front of him and has made himself into a solid starting option for the Cowboys.

I can see Ruckert’s career taking a similar journey as a player that possesses a lot of similar enticing traits but needs a little bit of seasoning and refinement before he can be entrusted with a starting gig. I expect him to go in the middle rounds in a deep TE draft class and be used as a TE2-3 to start, but possibly earn a starting role in an offense as soon as Year 2 or Year 3 in the league.