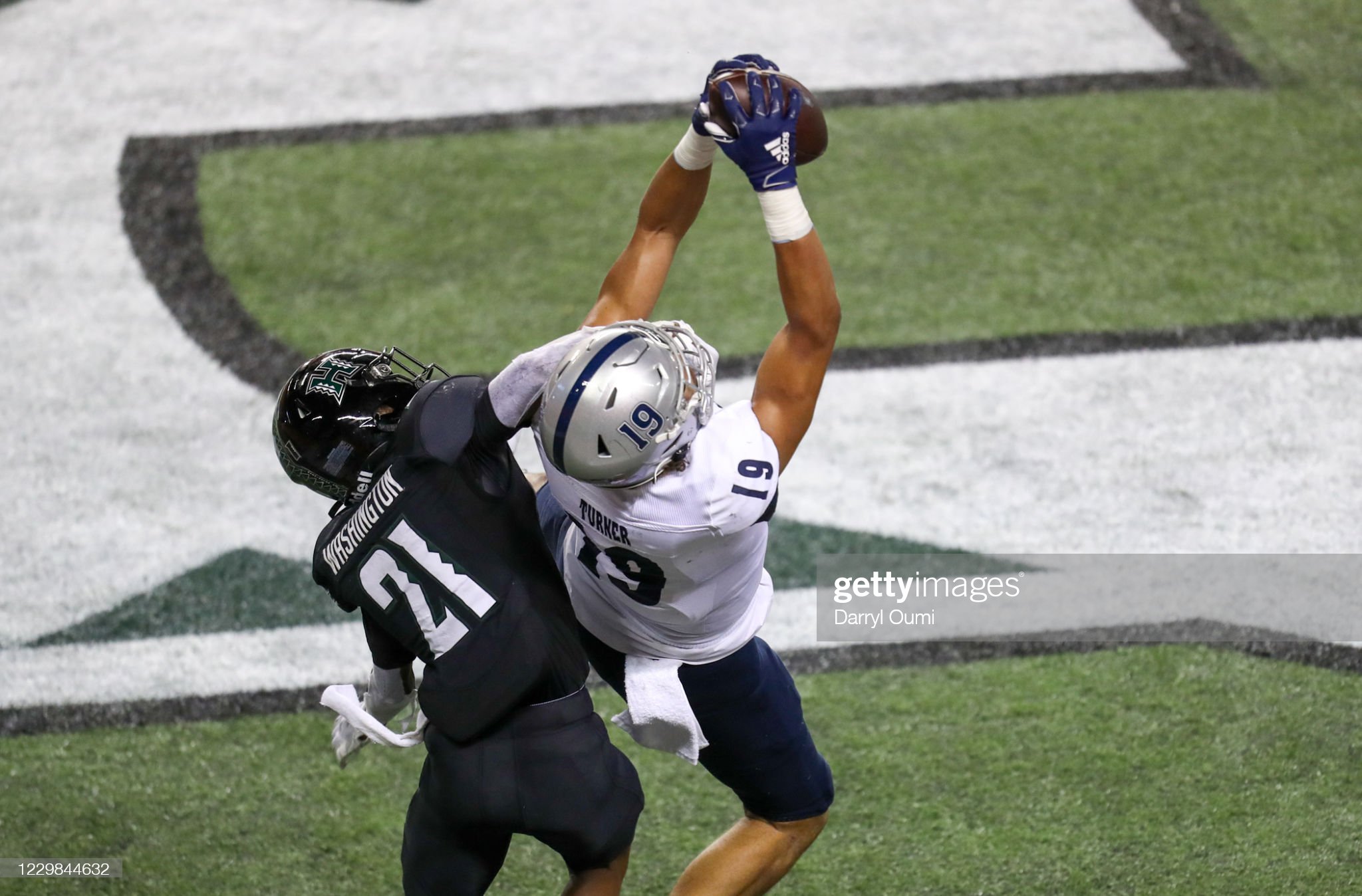 — Possesses great height and length for the position
— Has the basketball background you love to see from receiving TEs
— Plays the ball in the air like a WR making the catch, having been a receiver his first two collegiate seasons
— Provides the QB a big-bodied target near the end zone
— Knows how to position himself well to body up smaller defensive backs on fades and back shoulder throws
— Will attack the ball at its apex, being a real asset in 50/50 ball situations
— Has the ability to track the deep ball down the field, running underneath the pass
— Long arms and big hands give him extended catch radius to snag passes outside of his frame
— Will use his size and length to engulf smaller DBs as a run blocker

— Doesn’t possess elite top speed or the burst to run away from coverage down the seam
— Has some ability as a route runner, but isn’t overly shifty to separate from DBs tasked with covering him
— Can struggle to stack DBs and LBs vertically when running down the seam
— Lacks the play strength to win combative catches consistently for a player of his size
— Thin lower half leads to him getting easily knocked off balance on contact
— Will get exposed as a blocker, needing to play with a stronger base and punch
— Will get stacked and shed often by defenders in pursuit of the football
— Needs to be more comfortable playing in-line at the LOS to truly be utilized as a traditional TE at the next level
— Provided little to no use as a special teamer while in college

Cole Turner came to Nevada as a two-sport athlete, dominating both on the gridiron as a wide receiver as well as on the hardwood as a basketball player. After his first two seasons with minimal action as a traditional receiver for the Wolfpack, Turner opted to make the position switch to tight end, and ultimately benefitted from that decision in the biggest way. He racked up back-to-back all-conference honors in the MAC, securing 19 TDs in two seasons, thus taking his name from an afterthought on the depth chart to the Senior Bowl and NFL Combine as one of the many draft eligible TEs this year in a deep class.

When you watch Turner on tape, you see a big-bodied pass game target that knows how to use his body to win matchups. He benefits from his basketball background, having the mindset to go up for the rebound at the top of the rim and secure the ball at its apex. This makes Turner a viable 50/50 ball/ end zone weapon like we see on this TD catch against Fresno State where Tuner climbs the ladder in single coverage on the outside, going up to get the ball and coming down for the score.

This ability to elevate for the football with his big body and long arms also comes useful on possession downs when the offense needs to move the chains. Check out this grab by Turner in the two-minute offense by Nevada as they attempt to drive the length of the field, elevating and coming down with the catch to pick up the first and get the drive going.

His height and length also allow Turner to make catch well outside of his framework, reeling in diving catches that he must fully extend for to get the completion. Here are a couple examples of Turner reaching out to snag the ball both over the middle of the field as well as along the sideline.

This extended catch radius, paired with the body control make Turner a dangerous red zone weapon when it comes to fades as well as back shoulder throws. We see the latter here on this play as Turner lines up wide to the left in single man coverage, running the fade to the end zone as #12 Carson Strong throws the ball outside to his back shoulder. Turner can track the ball and leap out to the side, snagging the ball while almost parallel to the ground and survives the ground on contact for the score.

Turner also does a good job leveraging linebackers and safeties in coverage as a former wide receiver, being a true threat to work vertically down the seam due to his size and ability to track the deep ball. Watch this play against Fresno State where Turner gets an inside release on the defensive back, getting a step of separation and makes the grab while turning in the air, but manages to turn into a runner after the catch, immediately getting up field. He gets wrapped up from behind but takes the defender with him a few extra yards before a convoy of Bulldogs bring him down.

While Turner primarily did most of his damage as a passing game option for the Wolfpack, he did demonstrate some competency as a blocker when matched up with smaller defensive backs on the outside. Here on this run play against Boise State, Turner picks up the safety coming down and manages to push him toward the sideline, thus allowing the tailback to run off his backside into the second level to pick up the first.

Still, Turner has a long way to go as a blocker is he is to be viewed as a traditional in-line TE at the next level. He lacks the overall play strength and functional mass in his lower half to drive defenders backward, often being stacked and shed easily by linebackers and defensive ends like we see on this rep against the Broncos as Turner struggles to maintain his block as the linebacker runs right around him into the ballcarrier.

This lack of functional mass and strength also leads to Turner easily being knocked off his center of gravity both as a receiver as well as a blocker, causing him to lose balance and end up on the turf. We see that here as Turner blows up the defensive back coming down toward the LOS as he goes out on his route, but this causes him to stumble and ultimately hit the deck, taking himself out of the play.

While a former WR, Turner isn’t the most dynamic option in the passing game in terms of long speed or decisive route running. He often relies in his size and body positioning to win catches and often struggles to generate separation as a route runner. Here is one example against the Bulldogs where Turner approaches the linebacker dropping back into zone coverage in the middle of the field, running right into the defender who gets hands on him and slows his release, proceeding to run stride-for-stride with him the rest of the way as Strong loses time to get the pass away and gets sacked.

Overall, Cole Turner is this classic new-age “move TE” who operates more like a pumped-up wide receiver rather that a traditional in-line TE in years past. He is a jump ball specialist that uses his size and basketball background effectively on possession down and in the red zone, being that big-bodied threat that can go up and get it as well as make difficult circus catches. He can at times be a mismatch up the seam for linebackers and safeties but doesn’t generate much separation as a route runner and lacks the functional strength and size to consistently win combative catches as well as be trusted as a reliable blocker.

When searching for potential pro comparisons for Turner, Miami Dolphins TE Mike Gesicki came to mind as a similar style player that too has a lauded basketball and men’s volleyball background, utilizing his body and size to be a mismatch nightmare against smaller defensive backs and slower linebackers as a pseudo WR. Gesicki is a better athlete than Turner, posting far better explosive numbers in the 40, vert, and broad. However, they share nearly identical size (6’5 1/2”, 247lb) and play similar roles as TEs not attached to the LOS that don’t specialize in blocking but are more receivers in nature that can block on the outside as well as in the slot.

Gesicki was selected in the second round of the 2018 NFL Draft, and while I think that is a little rich for Turner who isn’t the same caliber of athlete, I do think that the team that drafts him can deploy him in a similar fashion as the Dolphins use Gesicki. The Pittsburgh Steelers already has a player in this role in Pat Freiermuth, so Turner may not be the type of TE that they target.

Still, Turner said that he did speak to the Steelers at the NFL Combine, so that suggests that they are doing their due diligence on him at least. Turner needs to get stronger to hold up as a consistent player at the next level, but the traits are there for him to be a viable receiving option at the TE position.