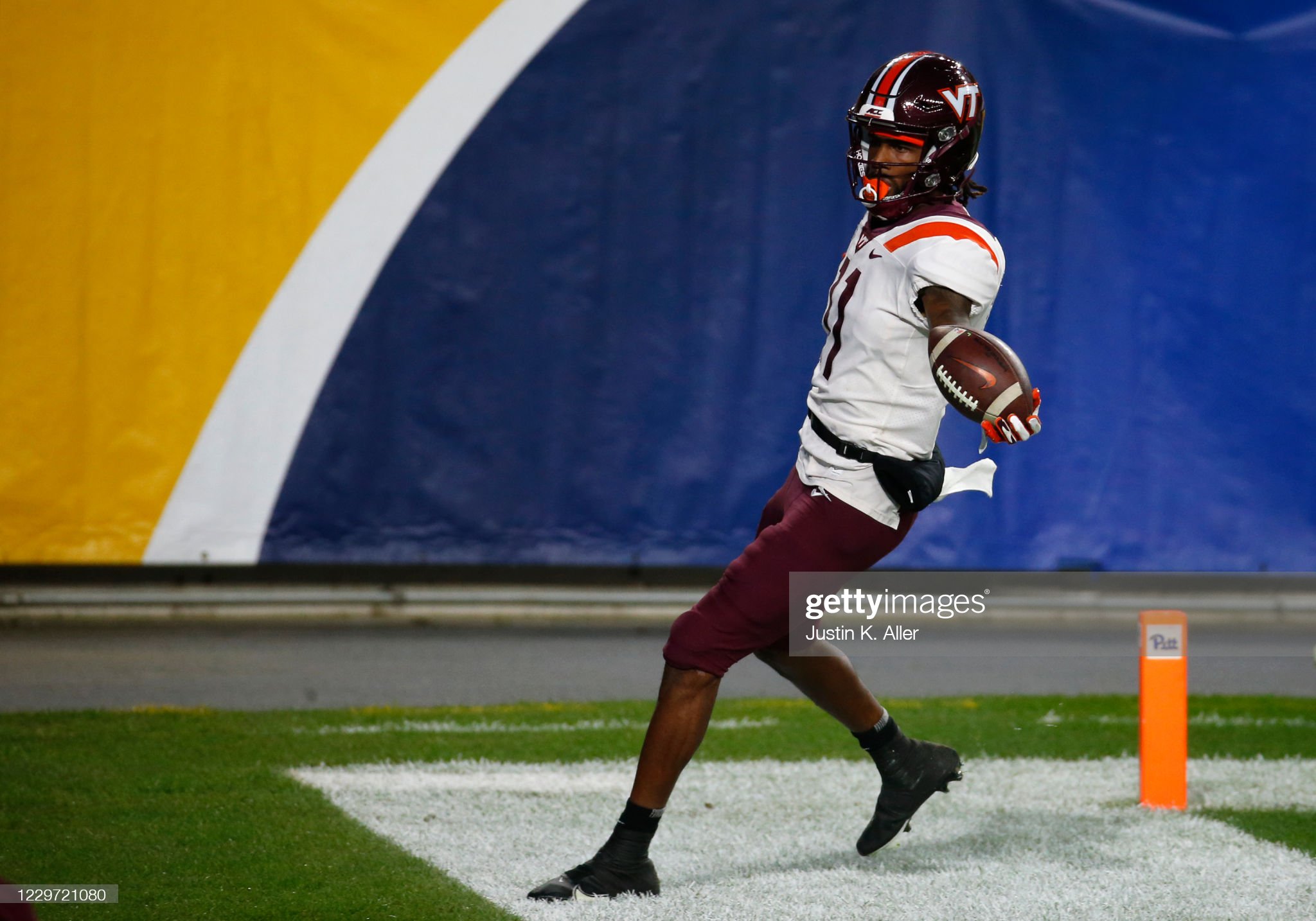 From now until the 2022 NFL Draft takes place, we hope to scout and create profiles for as many prospects as possible, examining their strengths, weaknesses, and what they can bring to an NFL franchise. These players could be potential top 10 picks, all the way down to Day 3 selections and priority undrafted free agents. Today, I’ll be profiling the top receiver from a team in the ACC.

In the draft season, players want to show as much as they can to prospective teams. So why do one Pro Day when you can do two on the same day. Tre Turner did the positional drills at the Virginia Tech Pro Day but earlier that day he was at the Liberty Pro Day catching passes for Malik Willis. The Steelers had a full contingency there to see Malik Willis so they did get an additional look at Turner. He is a lean, lanky receiver who played outside and in the slot in a run heavy offense for the Hokies.

As a receiver, he has solid up field acceleration verses Off coverage and good quickness at the line of scrimmage against Press coverage without a jam to get a clean release. Within the route he uses his hands well to slap at the defenders hands to keep them off of him. He has good quickness and solid speed to get a step on deep routes. On short area throws his is solid at creating separation and is solid dropping his hips and coming back really selling it on stop and go routes.

Vs Notre Dame, Turner (11) does a nice job to sell the post before breaking to the outside for the easy catch.

Vs Notre Dame, here is a really nice sell with the hip drop to get over the top but the ball was slightly overthrown.

Vs Pittsburgh, he works back to the ball and makes the first guy miss to get the extra yards.

As a pass catcher, his hands are quality; he tracks the deep ball well and is solid making contested catches. His body control is very good able to twist and contort his body to make difficult catches and adjust around his frame. He was used mostly in the short and deep areas as well as consistent usage on fly/touch passes behind the LOS. After the catch he can make the first guy miss and is solid adding yards after the catch.

Vs North Carolina, they liked to use him on the touch/fly passes and he turns it into a good gain.

Vs North Carolina, this is a straight go route that he tracks the ball nicely over his shoulder.

At Miami, Turner (wearing 25 in this game) displays a good showing of his ability to twist his body to adjust to the ball on this touchdown.

At Miami, he runs a post route making the contested catch from the slot.

In the running game, he was used often in his career with over fifty carries. Most of it was of the fly motion, hand off variety and he showed good patience to let his blockers on the outside engage before he made his decisions. He was a willing blocker and was solid getting himself in a good position to help teammates with a block on the second and third level.

Vs North Carolina, late in the game and needing a first down they run a fly sweep and he makes a good decision to cut back and get up field quickly.

Vs Notre Dame, here is another fly run and I liked his patience to use his blockers to set up his running lane.

At Miami, Turner playing with the upper body injury makes and nice block from the slot on the overhang defenders.

He lacks the top end speed to run away from defenders. As a route runner, he is a bit loose and doesn’t really have sharpness or explosiveness out of his break. Physical defenders are going to be a test for him to see if he can get through his route. He wasn’t used often on the intermediate routes in the games watched. After the catch he isn’t explosive and didn’t show the ability to create big plays after the catch but some of that could be on the quarterback play.

Overall, Turner was used on the outside and in the slot mostly in the short and intermediate areas. He has quickness at the line of scrimmage, uses his hands well within the route and drops his hips well. His hands are good, tracks the ball well, has very good body control and was solid in contested catch areas. He also has a good amount of experience running the ball on fly sweeps.

Areas to improve include adding play strength, tightening up his route running and improving his ability to separate consistently. Adding to his route tree and creating more after the catch would be beneficial as well.

Turner is an interesting player coming from a run heavy offense. Could he be more productive with better quarterback play? Probably, there is potential there and his experience running the ball is a plus. He has had some injuries the past two seasons (plantar fasciitis in his right foot and sports hernia in 2020 and an upper body injury late in 2021) which could add some concern.

He has a chance to be a slot receiver at the next level and possibly as a Z as well. For a comp, I’ll go with Ihmir Smith-Marsette who has similar potential to be a gadget receiver who needs to add strength and improve route running.

Games Watched: 2021: Vs North Carolina, Vs Notre Dame, Vs Pittsburgh, At Miami