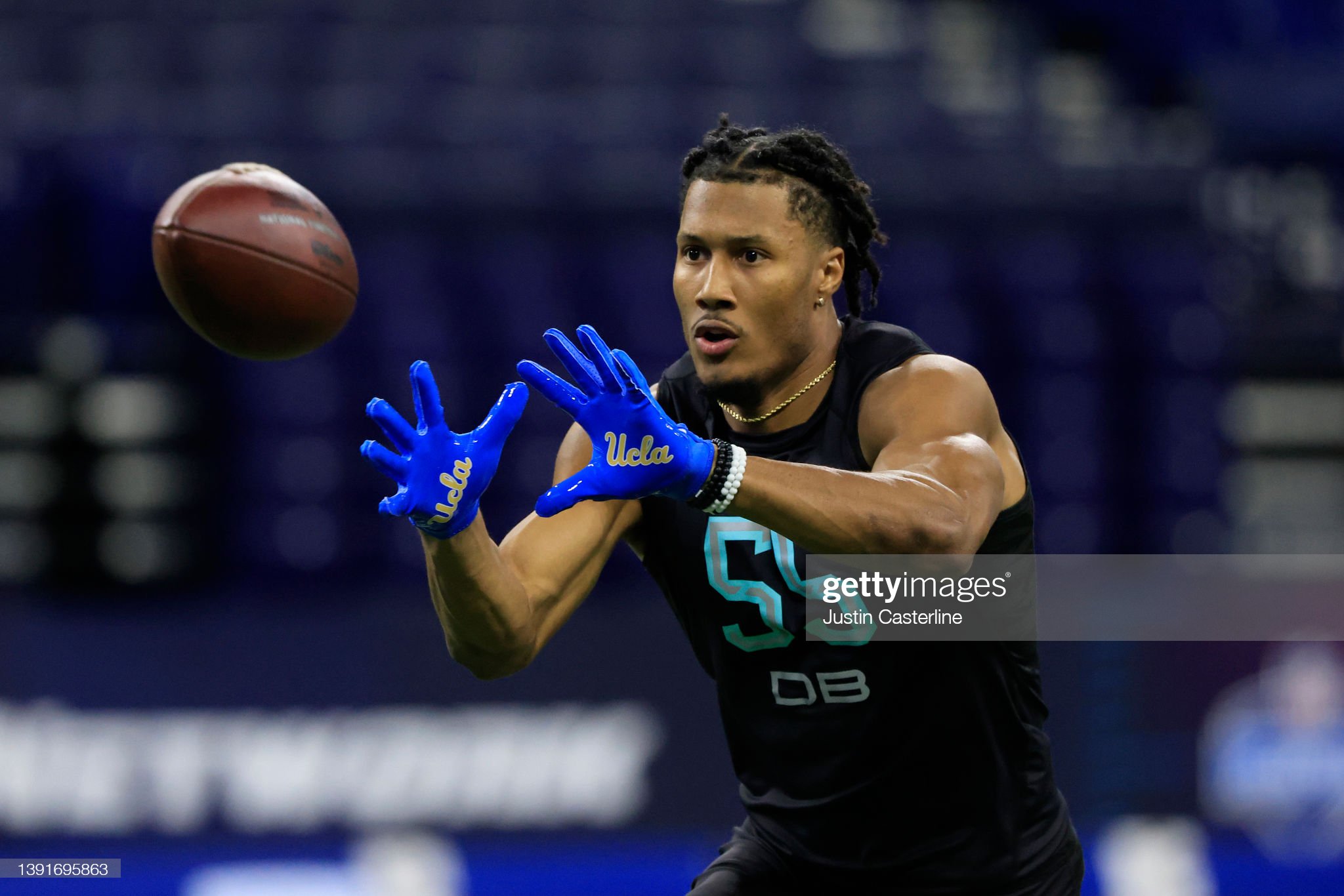 From now until the 2022 NFL Draft takes place, we hope to scout and create profiles for as many prospects as possible, examining their strengths, weaknesses, and what they can bring to an NFL franchise. These players could be potential top 10 picks, all the way down to Day 3 selections and priority undrafted free agents. Today, I’ll be profiling the son of a former Steelers player turned coach, Quentin Lake out of UCLA.

— Sufficient frame for the position
— Coverage ability is his best attribute from deep and slot
— Footwork and technique make up for lack of elite athleticism
— Eye discipline and IQ suit him well in zone and split safety looks
— Great communicator on the field, constantly barking signals across the defensive backfield
— Shows good football IQ of pass routes and concepts
— Constantly tries to punch the ball out when runner is wrapped up
— Football family bloodlines

— No elite athletic traits
— Has good click and close, but lacks a top gear
— Not a great run defender, at times lacks the aggressiveness/physicality you’d like to see
— Doesn’t pack a huge punch behind his pads
— Missed some tackles due to leaving his feet
— Missed 11 total games in his college career, strained hamstring at combine

When we at Steelers Depot do our draft profiles we try our best to profile guys with ties to the team, whether it be NFL combine interviews, all-star game invites, pro day attendance, or even bloodline history. This profile will be about the latter. Quentin Lake is the son of former Steelers defensive back turned Defensive Backs Coach, Carnell Lake. Carnell played with Pittsburgh between 1989 and 1998. During that time he racked up five Pro Bowl selections, one First-Team All-Pro team, and was chosen for the NFL HOF’s All-Decade team in the ’90s. He then was brought back to Pittsburgh as their Defensive Backs Coach between 2011 and 2017.

While Carnell was a linebacker turned safety and played like it but didn’t test like it (ran a 4.36 40-yard dash at the NFL combine), Quentin wasn’t gifted with that same speed or physicality.

However, that doesn’t mean Quentin isn’t a good football player. You can best tell Quentin is the son of a former football player and coach by the way he communicates and coaches on the field. He is constantly barking out adjustments and making sure the defensive backfield is where they need to be presnap.

Below is a great example of just that. Starting the clip just above the UCLA logo at the hash, Lake is making sure the right side is lined up correctly, then he even makes a last-second switch with the defensive back in the slot. After the snap, the two easily pass off or “banjo” the crossing receivers in the slot and Lake quickly is able to drive and tackle the receiver for a short gain.

You can also see Lake’s football experience in how he plays. In the below play, while it’s man coverage and Lake has the receiver in the flat, he keeps his eyes on the quarterback and powers down when he sees the QB’s eyes are locked on the out route. He is able ot drop back and almost picks off the pass on his own. The tipped ball lands in the arms of teammates for an interception anyways. Unfortunately, the play is all for not with UCLA jumping offsides, but regardless it’s a great play by Lake.

While Lake wasn’t able to fully bring in the last interception, overall, he shows good ball skills on tape and is able to attack the ball like a wide receiver. No better example of this than the play he had against USC I’ve clipped below to compare to a similar play his father had while in Pittsburgh.

To further show Lake’s ball skills and the way he attacks the football, here are his other two interceptions from 2021.

Where Lake really excels, in my opinion, is his coverage. As previously stated he’s not an elite athlete, but his technique and footwork more than makeup for it in coverage. These reps during the East-West Shrine game 1on1’s are literal teach tape one winding up as an interception and the other as a pass breakup.

This ability further allows you get creative with Lake with how a team can use him at the next level. He can be a bit of a swiss army knife for you and his football IQ I think will make it easy for him to learn multiple positions quickly.

Lake also showed he’s able to get off the has in split-safety coverages and make plays outside the numbers. In this particular cover-2 look, he’s able ot make the receiver pay for his quarterback attempting a holeshot throw, laying a well-timed hit that knocks the ball out of his hands.

Lake had to play some slot guys from far off quite few times at UCLA. He shows a decent click and close on these clips and are able to come up under control and make the tackle.

Where you can really start to poke holes in Lake’s game is his tackling, especially in the run game. Too often he leaves his feet to ankle bite and isn’t able to bring a guy down.

Adding to that, he doesn’t have a ton of power behind his pads and isn’t very physical at the point of attack. While this rep he’s able to stack and shed the tight end, he still bulldozed at the goal-line for a touchdown. The USC game was particularly rough for him as he missed four or five tackles from my count.

It’s not that he can’t do it either. He just needs to clean up that part of his game. I always like to see guys fighting through traffic because it’s not always going to be a clean shot. Below, Lake’s able to use his lateral movement to side step some blockers and make the tackle for a short gain on the WR screen.

Overall, Lake is a smart, fundamentally sound safety that certainly has a place in the NFL. I think he’s best suited for the free safety role, but also could see him playing in the slot in sub-packages.

I don’t think he’ll ever be a guy that’s going to take your head off, but he doesn’t need to be. If he can clean up his tackling and work in the run game, he could turn into a solid chess piece for a defensive coordinator. With the way he’s able to cover and move around combined with his lack of elite athleticism, it honestly reminds me a lot of a player that surprised a lot of Steelers fans with his play last year being a 7th-round draft pick, Tre Norwood.

If Lake ends up in the right situation, I could see him contributing right away. His ceiling is likely being a good, not great, player.