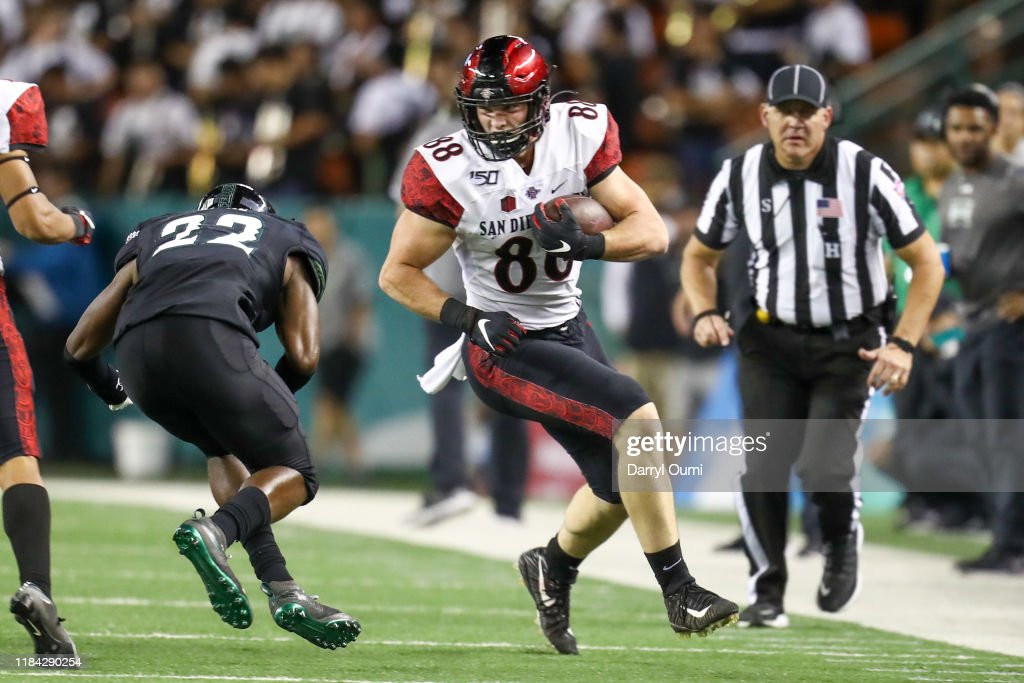 From now until the 2022 NFL Draft takes place, we hope to scout and create profiles for as many prospects as possible, examining their strengths, weaknesses, and what they can bring to an NFL franchise. These players could be potential top 10 picks, all the way down to Day 3 selections and priority undrafted free agents. Today, I’ll be profiling a tight end prospect that wasn’t heavily recruited or featured in college, yet possesses the skill set as well as the athleticism to make him potentially a better player in the pros.

— Possesses NFL size and length at the TE position
— Good athlete at the position in terms of play speed and explosiveness
— Runs good route for a bigger body, getting in and out of his breaks cleanly
— Knows to get up field as a runner after the catch, looking to maximize every reception
— Has the frame and body type to be featured in the red zone as well as on possession downs
— Uses his frame well in contested catch situations against smaller defensive backs
— Presents a large catch radius as a receiving option
— Has sure, natural hands as a pass catcher
— Has room to expand his usage as a receiver compared to what he was asked to do in college
— Has good technique in pass protection with the hip and knee bend to absorb contact
— Has a strong punch as a blocker and can do a good job getting into his fits as a run blocker

— Isn’t going to pull away from defenders with deep speed or burst
— Isn’t an elusive runner after the catch
— Can struggle at times stacking linebackers when working vertically down the field
— Pad level can get high at times or too far forward as a blocker, limiting his overall effectiveness
— Can take better angles to seal off defenders as a blocker in the run game
— Motor/effort appears to be hot and cold as a blocker at times, sometimes looking to just put a body on a man rather than run him off his spot
— Minimal production in the receiving game coming from a run-first offensive system

— Senior prospect from Las Vegas, NV
— Two-star recruit despite receiving first-team All-Nevada honors as a senior tight end and linebacker
— Multi-sport athlete in high school, also starring in basketball and track
— Played in the final nine games of his true freshman season, logging one reception for ten yards
— Played in all 13 games on the season with 11 starts and had 15 catches for 201 yards (13.4 YPR) with three touchdowns
— Started all eight games in 2020 and had 21 catches for 203 yards (9.7 YPR)
— Started all 13 games for the Aztecs in 2021 and caught 31 passes for 357 yards (11.5 YPR) and two scores
—  Honorable-mention all-Mountain West (2020)
— Three-time Mountain West Scholar-Athlete (2018-20), Three-time Mountain West Fall All-Academic Team (2018-20)
— Business Administration Major

Daniel Bellinger from San Diego State is used to being slept on during his football life, having been tabbed as only a two-star recruit coming out of high school despite being a two-way star at TE and LB playing in Las Vegas. He signed with the Aztecs and worked on his body to become a bigger, stronger player to suit the physical play style San Diego State embraces as a run-heavy offense. While this made Bellinger an accomplished blocker, his usage in the passing game never flourished, making him hard to distinguish from a deep TE class.

Still, his performance at the Senior Bowl as well as his impressive testing at the NFL Combine has turned heads in the pre-draft process, including NFL Network analyst Daniel Jeremiah who put Bellinger in his top five TE prospects. Math Bomb’s Kent lee Plate also has praised Bellinger, acknowledging him as a big winner with an impressive RAS Score that has become the new standard of athletic standard testing.

When you watch Bellinger, you see the athletic traits pop on tape along with an NFL-ready frame. He is an accomplished blocker that gets after people in the run game as you can see in this two-play sequence, tossing both defenders to the floor.

He understands leverage as a blocker and will look to turn the defender away from the play to create a seal on his backside or wash him down the LOS to free up the corner for the running back. Here on this play, we see the former done by Bellinger as he picks up the defender on the edge of the defense and gets hands inside his chest, working his hips around to create a seal for the runner to run behind as he takes the ball into the second level of the defense.

He can climb to the second level an overpower smaller defensive backs, but also has the strength and aggressiveness to handle edge defenders at the LOS. Here are back-to-back plays against UTSA where Bellinger first chips the DL and then locates the DB and proceeds to run him down the field. The second play shows Bellinger kicking out the edge rusher, spinning him in a circle as the RB passes by and finishes the defender by planting him into the turf.

While a capable run blocker, Bellinger is also an accomplished pass protector as well when asked to stay in max protection situations. He plays with a good base and has the athleticism to mirror defenders at the LOS. Watch this TD pass by the Aztecs and how Bellinger cuts off the defender attempting to cross his face on the stunt, shoving him into the scrum and effectively takes him out of the play.

Still, Bellinger can improve his consistency both in his play as well as his effort as a blocker to be seen as a truly elite prospect in this area of his game. He has moments where he seems to settle for a stalemate at the LOS rather than running through the defender’s face when he knows he can do it. He also occasionally gets too high or too far extended with his pad level as we see the latter here on this whiffed block attempt, dropping his head and lunging forward as the defender easily evades the block, sending Bellinger stumbling forward.

When it comes to the receiving game, Bellinger was often used as a safety valve/check down option around the LOS. He is a sure-handed pass catcher that has good size and the athletic ability to turn up field to pick up additional yardage after the catch. We see that on this reception in the flat against the Roadrunners, catch the ball and turns up field to get all he can before being met by the defense.

We see a similar use of Bellinger on this screen pass against Arizona, catching the ball and steps out of a diving tackle attempt as he gets to the sideline, following his blockers as he dives for the pylon for the score.

While he wasn’t often used as a downfield target, Bellinger proved that he could definitely be used in such a role when the opportunity presented itself. This rep shows Bellinger’s ability to win the combative catch and use his big frame to reel in the pass from his QB while on the run while getting drilled by the DB flying in from over top. Bellinger does a great job finding the soft spot in the zone coverage and holds onto the ball once hit to secure the reception and move the chains.

When Bellinger went to the Senior Bowl, his skill set as a pass catcher only got more exposure in front of NFL scouts and executives. He may not be a dynamic athlete, but Bellinger has the athleticism to win against LBs in man coverage situations and take advantage of smaller DBs. Watch this rep against Georgia LB Channing Tindall as Bellinger gets right into Tindall’s frame on the route, selling the post and quickly turns outside on the corner to the sideline, getting ample separation to haul in the slightly underthrown pass for a big gain.

Overall, Daniel Bellinger isn’t going to wow anyone with his performance on the stat sheet during his collegiate career, but when you watch the tape, you see a plus-athlete in a traditional in-line ‘Y’ TE’s body. His flashes as a potentially dominant blocker paired with his upside as a pass catcher make Bellinger an intriguing prospect where you must debate the tape and traits against the production. As one of the true Y TEs in this draft class, teams should look to bring Bellinger in as a developmental TE2-3 with the potential into developing into a quality well-rounded player at the position in the league.

When watching Bellinger and scanning his athletic testing, former LSU Tiger and current Las Vegas Raider Foster Moreau immediately came to mind. Moreau has nearly an identical frame to Bellinger (6’4 1/8”, 253lb) along with eerily similar athletic testing results (4.66 40, 36.5” vert, 10’1” broad, 22 bench reps). Moreau too was hardly utilized as a pass catcher at LSU, never surpassing 278 yards in a season. Still, he flashed the ability to be a solid receiver in the pros while being an accomplished run blocker that can play special teams.

Moreau was drafted in the fourth round of the 2019 NFL Draft, and I can foresee Bellinger going in a similar range as a guy that may need some seasoning but has all the athletic traits you want to see in a well-rounded, traditional TE prospect. In the case of the Pittsburgh Steelers, Bellinger would go a long way to round out the TE room with Pat Freiermuth as the #1 guy and hopefully challenge Zach Gentry for the #2 role. Whether or not TE is a pressing need for Pittsburgh in the middle-to-later rounds of the draft has yet to be seen, but I do expect Bellinger to develop into a solid pro.