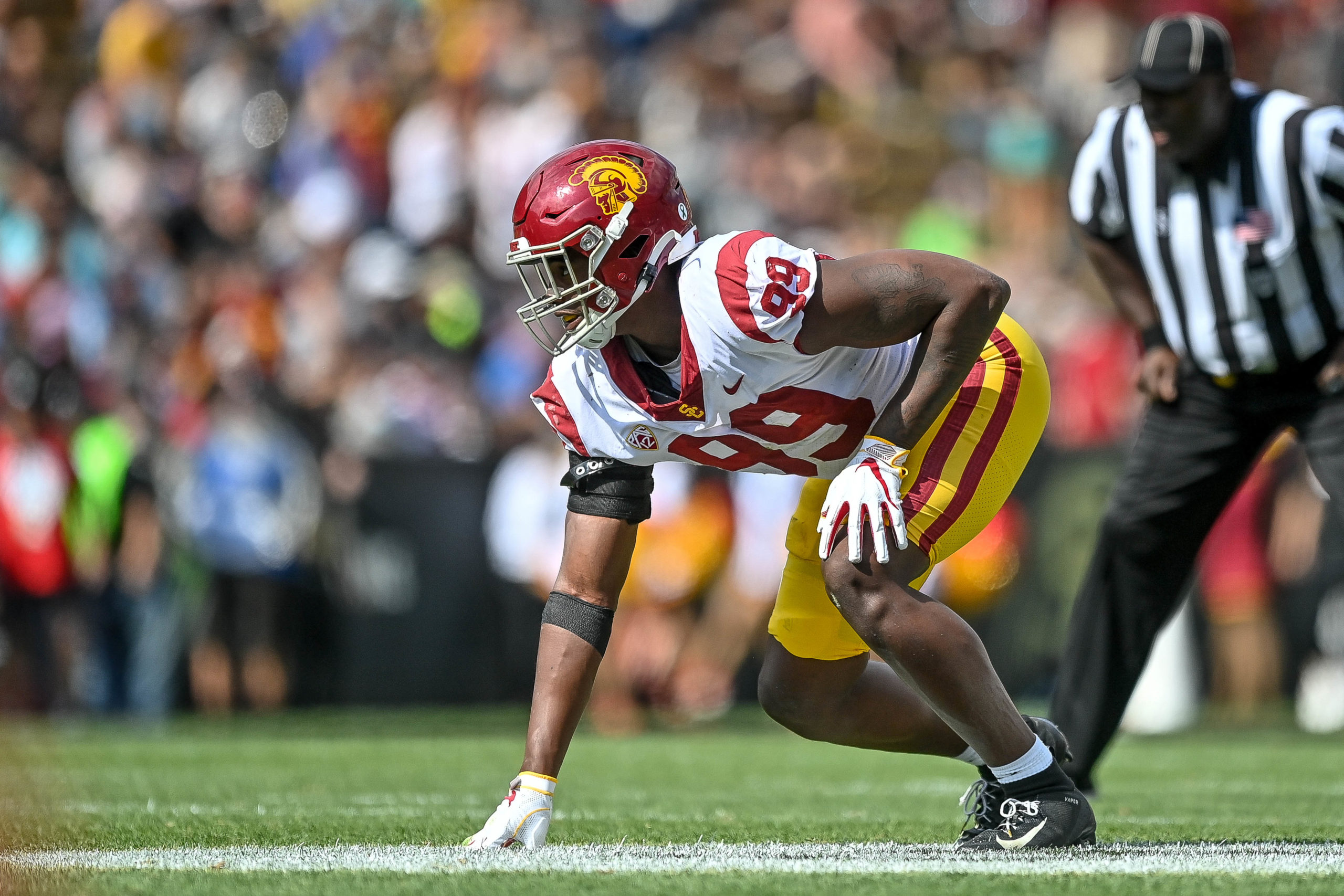 From now until the 2022 NFL Draft takes place, we hope to scout and create profiles for as many prospects as possible, examining their strengths, weaknesses, and what they can bring to an NFL franchise. These players could be potential top 10 picks, all the way down to Day 3 selections and priority undrafted free agents. Today, I’ll be profiling an edge rusher that took college football by storm early on in his career, but has since fallen off in terms of buzz, being once regarded as a first-round lock.

— Acceptable height paired with impressive length for the position
— Has played on either side of the LOS and has played inside as a 4-technique as well as outside as a 7-tech
— Experience lining up in a 2pt stance as well as with his hand in the dirt
— Long, lanky edge rusher that is a long strider and covers ground quickly
— Has a great get off on the snap of the football
— Displays great burst off the line and acceleration on backside pursuit
— Shows great effort as a pass rusher as well as a run-and-chase defender
— Closes distance on the QB in the pocket in a hurry as a speed rusher off the edge
— Has great bend, flexibility, and contact balance to get around the corner
— Can flatten the corner and stay on his feet on contact from blockers
— Does a good job countering inside, shooting gaps with speed and elusiveness
— Well-versed pass rusher, having a plethora of moves at his disposal to win inside and outside
— Uses his hands well on the two-hand swipe, dip/rip, swipe/rip, etc to keeps hands off his frame
— Has a mean inside spin move as well as the low pad level to dip inside across tackles’ faces on an inside rush of the QB
— Has shown the ability to drop into space and cover, picking off a couple of passes in his career

Drake Jackson was destined from birth to play outside linebacker for the USC Trojans. Don’t believe me? The story goes Jackson’s father asked hospital staff to put “Drake Jackson from the University of Southern California, starting linebacker coming in at 260” on his son’s birth certificate the day he was brought into the world on April 12, 2001. Jackson’s father spoke it into existence as Drake ended up starring at linebacker and defensive end during his time at USC, getting Freshman All-American honors in 2019 while also securing back-to-back second team All-PAC 12 nods in 2020 and 2021.

When you watch Jackson on tape, you see a twitchy, gangly edge rusher that reminds you a bit of the character Gumby with his bend and flexibility with his wiry arms and legs. This athleticism paired with his length make Jackson a skilled speed rusher off the edge, utilizing a plethora of pass rush moves at his disposal to beat offensive tackles in his pursuit of the QB. He is a fluid mover that can win inside or outside as evidenced by this montage of clips with Jackson showing his speed and quickness crashing inside to pressure or sack the QB.

Jackson’s length and bend around the edge put OTs in a bind as he attempts to get around the corner, pairing his ability to flatten the corner along with good hand usage to knock hands down and get into the pocket as a pass rusher. Check out this play against Washington State where Jackson hits the two-hand swipe on the LT to clear the block and get the big strip sack fumble that the defense recovers in the end zone for the TD.

His ability to bend and drop his shoulders around the corner make him a real threat on the speed rush. Watch this ghost move Jackson puts on the RT of Arizona State, completely evading the block and forces the incomplete pass on a crucial down as the Sun Devils attempt to drive down the field to get into field goal range at the end of the game.

Jackson’s hand usage and bend can be eerily can be impressive even when he fails to get home on his rush. Given the fact that he just turned 21 years old and is still figuring out how to be use his body as a pass rusher, it can be conceivable that more of these pressures can turn into sacks with continued development. Here is a couple more examples of Jackson using speed, burst, bend, and hands to get around the corner.

For being a long, gangly edge rusher, Jackson plays with surprising contact balance. He has a good sense of spatial awareness and can stay up and redirect to the ball quickly in his rush like we see on this rep against Stanford at the back attempts to chop him down, but Jackson manages to stay upright and continue pursuing the QB who ultimately throws the ball away.

Not only does Jackson show good effort and pursuit of the ball as a pass rusher, but also as a run defender. He plays with a motor in pursuit of the football as evidenced on this rep where Jackson works across the field to get in on the tackle of the running back while working off the block by the LT.

Still, there are some obvious flaws in Jackson’s game that need to be cleaned up for him to become a three-down player at the next level. While a skilled speed rusher that shows pursuit as a run defender, he fails to play with functional strength and power consistently. He has a thin lower half, partially due to him deciding to drop 20lb prior to last season which ended up affecting his effectiveness at setting the edge and holding the point of attack against the run. He would get displaced against the run often as we see on this rep against Stanford, getting kicked out by the TE, thus creating a wide hole the back runs through for the long TD.

His lack of strength and base also showed up with taking on blockers straight on. Here against Washington State, we see Jackson gets hands onto the tackle’s chest, but the tackle uses his excessive forward lean and lack of anchor to his advantage by executing the snatch trap technique on him, yanking Jackson to the ground and effectively takes him out of the play.

Overall, Drake Jackson is an intriguing case study where you see the glimpses of a skilled, dangerous pass rusher off the edge that can win in a multitude of ways both on an inside and outside rush. He shows great pursuit of the football and can drop into zone coverages, suggesting he would be a good fit as a 3-4 OLB at the next level. However, Jackson did himself somewhat of a disservice by dropping too much weight in attempt to be faster, losing that much-needed strength and power at the point of attack against the run.

While Jackson weighed in at 254lb at the NFL Combine, he managed to get his weight back up to 273lb for his Pro Day a month later which can be seen in his enlarged frame during the event, suggesting that he will play at a heavier weight closer to that 265-270lb range in the pros to better play against the run while still being able to give OL fits as a speed rusher.

When I watched Jackson, the thin, gangly arms and legs paired with the pass rush prowess immediately had me think of Brian Burns coming out of Florida State. However, a better pro comparison for Jackson from my film study would be guys like Robert Quinn and Harold Landry. Quinn (6’4, 265lb, 34” arm, 10 1/8” hand, 34” vert, 10’5” broad) and Landry (6’2 3/8, 252lb, 32 7/8” arm, 9 3/8” hand, 36” vert, 9’11” broad) share nearly identical measurables and athletic testing results as Jackson coming out of college and are both known for being gifted speed rushers off the edge that can bend the corner.

Landry dropped to the second round of the 2018 NFL Draft due to concerns of his effectiveness against the run, much like Jackson, but Landry’s athletic talent and prowess as a pass rusher has since shined in the league, racking up 31 sacks and a five-year, $87.5 million extension this offseason. I see Jackson in a similar boat who needs to develop to be a better three-down contributor, but has the skill set and athletic ability to become a feared pass rusher given his youth and room for development. Getting his weight back up will help this process as well as getting stronger in an NFL weight room.

Pittsburgh has their two starters in T.J. Watt and Alex Highsmith at OLB in 2022, but Jackson would be a great add on Day Two of the draft as a guy that can come in right away and contribute as a sub package/situational pass rusher like Landry did starting out in Tennessee as he develops into a more well-rounded defender. Should he show that development, Jackson could realistically enter a true rotation with Highsmith in 2023 and allow Pittsburgh to move on from him when he becomes a free agent if they feel comfortable with Jackson and Watt on the edge and don’t want to sign Highsmith to a lucrative extension.