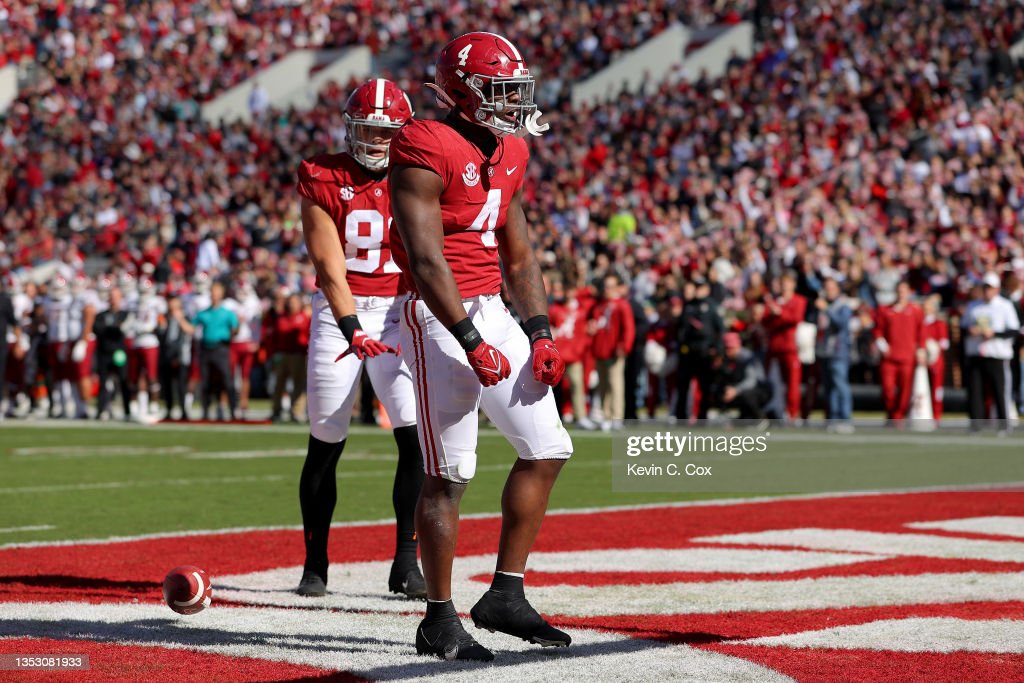 From now until the 2022 NFL Draft takes place, we hope to scout and create profiles for as many prospects as possible, examining their strengths, weaknesses, and what they can bring to an NFL franchise. These players could be potential top 10 picks, all the way down to Day 3 selections and priority undrafted free agents. Today, I’ll be profiling a running back that had to wait his turn in a crowded backfield for a perennial college football superpower but made the most of the opportunity this season with an increased workload.

— Possesses the size, build, and athletic traits you look for in a workhorse back
— Has deceptive burst when he gets an opening and subtle elusiveness with his lateral cuts
— Transitions from his lateral cuts to a forward sprint well in space and when hitting the hole
— Turns his feet over quickly for a back of his size
—Shows quick acceleration after getting the ball as he builds up speed on outside runs
— Physical runner that prides himself in being the hammer rather than the nail
— Looks to dish out punishment as a runner, finishing his runs falling forward and putting a shoulder into would-be tacklers
— Breaks a fair number of tackles thanks to his power to run through arm tackles as well as a strong stiff arm
— Refuses to let the first man bring him down
— Has shown the ability to make lateral sidesteps to evade would-be tacklers on the edge, forcing missed tackles
— Showed growth as a pass catcher in his final season, serving as a check down option in the flat and over the middle of the field
— Can create with power as a runner after the catch
— Willing and capable pass protector that will stonewall blitzing LBs and Ss
— Strong base and aggressive demeanor as a blocker help keeps the pocket clean as he scans for work

— Size with increased strike zone paired with running style may make it hard for him to hold up at the next level with a heavy workload
— Doesn’t possess a second gear as a runner with great top speed
— Doesn’t have the best vision of feel to locate the cutback lane
— Can be slow to process the blocking scheme in front of him at times, leading to him getting caught in the backs of his OL
— Lateral change of directions skills is limited due to his size and limited lateral agility
— Has some nice lateral cuts as a runner, but isn’t a guy that will consistently make defenders miss in space
— Limited exposure as a pass catcher that hasn’t been used often as a downfield/intermediate receiving threat
—Had to wait five seasons to earn the workload with other NFL backs ahead of him

— Redshirt Senior prospect from Tuscaloosa, AL
— March 22, 1999 (age 23 years)
— Rated as a unanimous four-star recruit and Top 10 RB in his class
— Played in the 2016 Alabama-Mississippi HS All-Star Game
— Committed to his hometown team and received limited carries in the Tide’s 2017 national title run with 24 carries for 165 yards (6.9 YPC) and two TDs in 11 games as a true freshman and added two tackles on kickoff coverage
— Rushed 63 times for 272 yards (4.3 YPC) and two touchdowns as a sophomore and added five kickoff returns totaling 84 yards with a long gain of 30, also made one tackle on special teams
—  Received a bit more action his junior year with 96 for 441 yards (4.6 YPC) and five TDs along with 11 catches for 124 yards (11.3 YPR) in 13 games
— Backed up current Pittsburgh Steelers RB Najee Harris during the team’s national title run in 2020 where he logged 91 carries for 483 yards (5.3 YPC) and six TDs along with 6 receptions for 26 yards (4.3 YPR), also returned three kickoffs for 56 yards
— Waited his turn before earning the starting job in his final season in 2021, starting 14 games and tallied 271 carries for 1,343 yards (5.0 YPC) and 14 TDs and added 35 receptions for 296 yards (8.5 YPR) and two scores
— Named the Cotton Bowl Offensive MVP for his efforts in the national semifinal win over Cincinnati
— First team All-SEC in 2021 (Coaches), second team All-SEC in 2021 (AP)

Brian Robinson Jr. grew up a native of Tuscaloosa, having the draw of playing for the Alabama Crimson Tide hardwired into his mind the day he started playing the game of football. Luckily for Robinson, he made himself a top recruit at the running back position and got the opportunity to play for his hometown team. Unfortunately, he found himself stuck in a crowded backfield with the likes of Bo Scarborough, Damien Harris, Josh Jacobs, and Najee Harris all ahead of his on the depth chart.  However, instead of transferring out and receiving playing time somewhere else, he embraced the competition and played whatever role was asked of him by the team until he got his opportunity to carry the load as the feature back.

When you watch Robinson on tape, you see that similar trend of Bama backs: good size, impressive play strength, a physical demeanor, and a sense of selflessness to do whatever the team asks of him. Initially when I watched Robinson during the season, I didn’t come away too impressed with his high-cut, one speed running style. However, when I dove more into the tape, I recognized that there was more to Robinson as a runner than what I had initially seen on tape the first time.

Robinson is the definition of a bulldozer at RB, having that sense of reckless abandonment where he wants to inflict punishment on you as a runner. He runs violently as a runner, using his power to run through arm tackles and a vicious stiff arm to throw defenders off his frame. This highlight run against the Georgia Bulldogs perfectly encapsulates Robinson as a load on the ground, breaking through numerous tackle attempts to pick up the first down.

We see Robinson’s aggressive running show up as well as a pass catcher out of the backfield. He wasn’t utilized heavily in the passing game until his final colligate season where he had 35 receptions for nearly 300 yards. While mainly used as a check down option in the flat or near the LOS, Robinson is quick to get up field and create after the catch like we see on this play where he contacts #16 Lewis Cine who wraps him up high and proceeds to running his legs on contact, driving Cine backward as he nearly picks up the first down.

While Robinson wasn’t heavily featured in Alabama’s passing game, that doesn’t mean that he will be a non-factor at the next level in this area. He showed during the pre-draft process that he is a capable pass catcher and had the fact that he was playing with multiple top draft picks at WR soaking up targets in the passing game. When he got his shots to catch the ball, he made them count like we see on this long catch-and-run score against Mississippi State.

An underrated part of Robinson’s game is his ability a subtle cut to get up the hole quickly as a runner, transitioning from running East/West to straight downhill. Here we see that unique blend of quickness and power as he stretches the outside run to the left, then quickly puts his foot in the ground to get vertical up the hole, accelerating through the gap and runs straight into #21 Myjai Sanders and proceeds run him over with power as he falls forward a couple yards shy of the line-to-gain.

Robinson can make a quick cut in space to evade defenders and then builds up speed quickly, running wild into the second level and becomes a load for any defender to bring down. Here are a couple of examples of Robinson making a defender miss in space with a sidestep of an arm tackle or a quick cut as he gets into open space and makes multiple defenders drag him down after picking up nice chunk gains on the ground.

Still, while Robinson is more elusive than you would think for a near 6’2, 225lb back, he shouldn’t be considered this shifty joystick in the open field. His size limits his ability to make instant change of direction movements which are also accompanied by his lack of elite vision and inconsistencies reading the blocking scheme ahead of him. This leads to him missing gaps opening to the side like on this run versus Georgia where a gap opens to his right for him to escape laterally, but he fails to exploit the gap and gets stuck behind the backs of his OL for a minimal gain. A difficult play to make, but one you would like to be able to see from and NFL feature back.

Another underrated part of Robinson’s game that should be highlighted is his prowess as a pass protector in the backfield. His size, strength, and effort show up repeatedly in his tenacity to step up and take on blitzing linebackers and safeties in the hole, having the strength to stonewall them in their tracts to keep the pocket clean. Here are a couple of examples of Robinson more than holding his own in pass protection against NFL-caliber linebackers from Georgia.

Overall, I personally came away impressed with Brian Robinson as a prospect. I kept hearing draftniks were extremely high on him as a potential Top 5 back in this draft class, and after watching more, I understand the intrigue in a back that is a physical runner in-between the tackles that can pick up the tough yards after contact, but also has some burst and shake to him as a runner as well. In fact, Pro Football Focus credited Robinson with the most missed tackles forced in a season by an Alabama RB since 2014 with 79. That’s three more than Derrick Henry in 2015 and eight more than Najee Harris in 2020.

When thinking of a pro comparison for Robinson, Baltimore Ravens RB Gus Edwards came to mind as a similar downhill, no nonsense runner that can physically wear down defenses. Edwards shared near identical measurables to Robinson coming out of Rutgers (6’1, 229lb) as well as similar play speed (4.52 40). Both runners are beasts at forcing broken tackles, but also has some shake to them as well as the ability to contribute on passing downs as pumped-up pass catching backs as well as strong pass protectors. Edwards ended up going undrafted but has since earned a large complimentary role with the Ravens in the backfield, having the ability to shoulder the load if called to do so.

While I think mid-round draft capital will be invested into Robinson unlike Edwards, I do see Robinson playing a similar role in the league as the “thunder” or 1B runner in a committee that continues to wear down defenses in compliment to another backfield teammate to help shoulder the load. He fits the power/gap running style, but he could contribute on some inside zone schemes as well. The Pittsburgh Steelers could use a viable compliment to Najee Harris in the backfield, and while Robinson is cut from a similar cloth as Harris, the two have proven to work well in tandem with one another in the past and would present defenses with a long day at the office with a smash-mouth rushing attack.