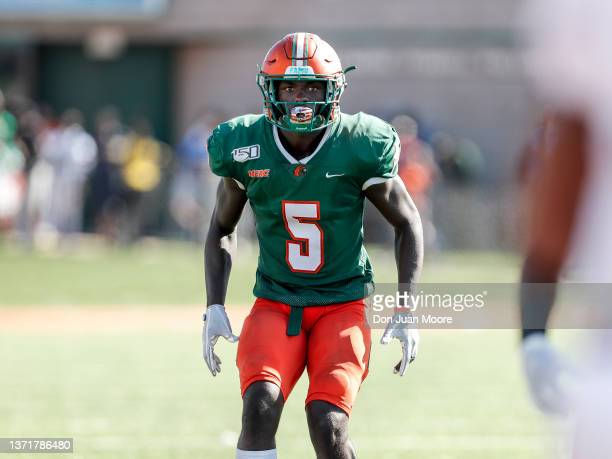 From now until the 2022 NFL Draft takes place, we hope to scout and create profiles for as many prospects as possible, examining their strengths, weaknesses, and what they can bring to an NFL franchise. These players could be potential top 10 picks, all the way down to Day 3 selections and priority undrafted free agents. Today, I’ll be profiling Florida A&M safety Markquese Bell.

— Decent frame and fills out frame well enough
— Quick trigger and fires downhill with authority, aggressive mentality
— Fills alley in run game well and throws body around
— Overall, shows excellent hit power and willingness to sacrifice himself
— Good upper body strength and ability to get runners on the ground
— Takes good angles to the football
— Solid pursuit and effort sideline to sideline, shows impressive range chasing the ball
— Flashes ability to man-up on short and vertical shots, good finisher in all phases of his game
— Experience and an effective blitzer with good timing
— Tested well and game shows ability to translate and make jump from lower level of competition

— Shows tightness in hips and ankles when asked to change directions, reflected in poor agility times
— Straight-line type of player
— Will go for knockout blow instead of wrap up tackle
— Inconsistent tackler especially in closed/tight spaces
— Played against lower level of competition
— Slightly older than typical prospect

Markquese Bell was a high-prized recruit out of college who initially committed to Maryland but never played a snap there. Two transfers later and he wound up at Florida A&M where he’s put in a couple of good seasons. Bell is decently put together and is a downhill alley filler, throwing his weight around and quickly taking guys to the ground. Some examples.

While he had just one interception in 2021 and seemingly wasn’t targeted a lot, I did see some positive man coverage reps on his tape. Here, watch him turn and run and finish the play to force the incompletion and prevent a long-gain/touchdown.

He also posted an impressive 40 time at the Combine, showing off his straight-line speed. Bell looks good in a line with his explosiveness and closing speed.

On the negative side, his agility drills were really poor. He’s a bigger safety but not a huge guy and those short shuttle/three cone times are pretty ugly. I saw some of that stiffness and tightness on his tape, too. Bell is a linear athlete working best downhill.

He also missed too many tackles. In part due to some issues in technique and in part due to trying to go for knockout blows, like he attempted, and failed, here.

Overall, I admire Bell’s explosion and overall playing style. There’s enough talent here to quell the small-school concerns. He best fits as a classic run-and-chase box safety but could do well in that role. I can see him becoming a dangerous special teamer, too. My NFL comp is former Colts’ safety Clayton Geathers.