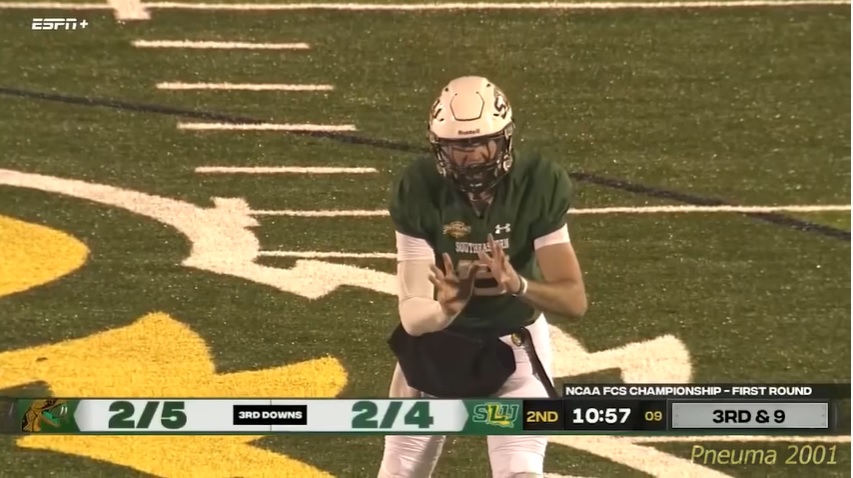 From now until the 2022 NFL Draft takes place, we hope to scout and create profiles for as many prospects as possible, examining their strengths, weaknesses, and what they can bring to an NFL franchise. These players could be potential top 10 picks, all the way down to Day 3 selections and priority undrafted free agents. Today, I’ll be profiling Southeastern Louisiana QB Cole Kelley.

— Uniquely big build, largest QB in this draft class with good hand size
— Ran offense well and showed control over the action, well-rounded game who doesn’t show glaring weakness
— Throws fastballs and changeups, shows ability to zip passes into tight windows (and willing to take those chances) but shows touch down the seam
— Puts ball on the money on corner/7-routes with consistency
— Good timing thrower overall and gets ball out of his hand quickly
— Shows plus placement to throw balls away from defenders
— Has some experience working under center, usually to setup playaction
— Highly productive player who won shootouts
— Size and functional mobility to be a minor threat running the football, used on designed runs (QB power/draw) in goal line and short-yardage situations
— Good arm strength and able to make plays downfield
— Did well in situational football, aggressive on third down and threw to the sticks
— Size allows him to make throws with defenders around/on him
— Improved throwing motion and lessened windup over the course of his career

— Lumbering body with heavy feet and lacks foot speed, has trouble escaping defenders from within/around the pocket, awkward mover overall
— Needs to consistently hitch up in the pocket and climb to avoid EDGE rushers
— Tends to throw behind on out/sideline throws (flats, speed outs)
— Stacked bad plays and needs to show shorter-term memories, bad decisions beget bad decisions
— Will fade a bit under pressure
— Didn’t often fire the ball deep downfield
— Despite size and bulk, doesn’t break many tackles, especially in the pocket
— Played against lesser competition for bulk of starting career

I was asked several times to profile Kelley. And I’m glad I did. He’s an interesting guy with his frame obviously the most unique thing about him, a true 6’7 quarterback. Not many of those in the NFL. They’re all playing basketball somewhere.

On the football field, especially the last two years at SE Louisiana, Kelley has flourished. He shows an all-around game. I like his ability to show touch and zip and he’s willing to make some tighter window throws without being reckless. His overall rhythm and timing is on-point.

At the risk of getting caught up in one route, he throws the 7-route well, showing placement, accuracy, and getting the ball out on-time along the sideline.

Unlike a lot of the top QBs in this year’s draft, Kelley also spent some time under center. Shotgun was what he did a majority of the time but he has experience getting away from center. It mostly came off playaction at SE Louisiana, but it’s more reps than most. His three-step drops do look a bit clunky though. Wasn’t something he did much when he was under center in school until he played in this year’s NFLPA Bowl.

He also cleaned up his throwing motion. His long arms created a windup early in his career but he’s shortened his release since. Compare his time at Arkansas to where it’s at right now.

Kelley will need to work the pocket a bit better at the next level, especially knowing he won’t be running around a ton like other QBs in this class. He’s big and can use his size in short-yardage situations but lacks foot speed and is heavy in the pocket. He also won’t always climb and allow EDGE rushers to attack him.

He will need to show a shorter-term memory when mistakes get made. Stacked some bad plays in a three-INT performance with some poor decisions. Back-to-back INTs here with a third INT coming quickly on the other side of the half.

Overall, Kelley had impressive enough tape I wasn’t exactly expecting to see. He controlled the offense well and simply put points on the board while showing good baseline traits across the board. A guy of his size has rarely had success in the NFL, Paxton Lynch and Brock Osweiler are recent failed examples, but Kelley’s game feels a bit more refined than “hefty dude with live arm.”

My comp for Kelley is someone a touch shorter simply because the list of QBs 6’6+ is so narrow. Nick Foles came in about 6’5 but was a big, sorta clumsy body type. Kelley is a slightly better athlete and threat as a runner but I can see him sticking in the league as a backup. And if he, like Foles, gets into a good system and gets hot, who knows what could happen. Day Three QBs are a total dart throw but there’s something to work with here.