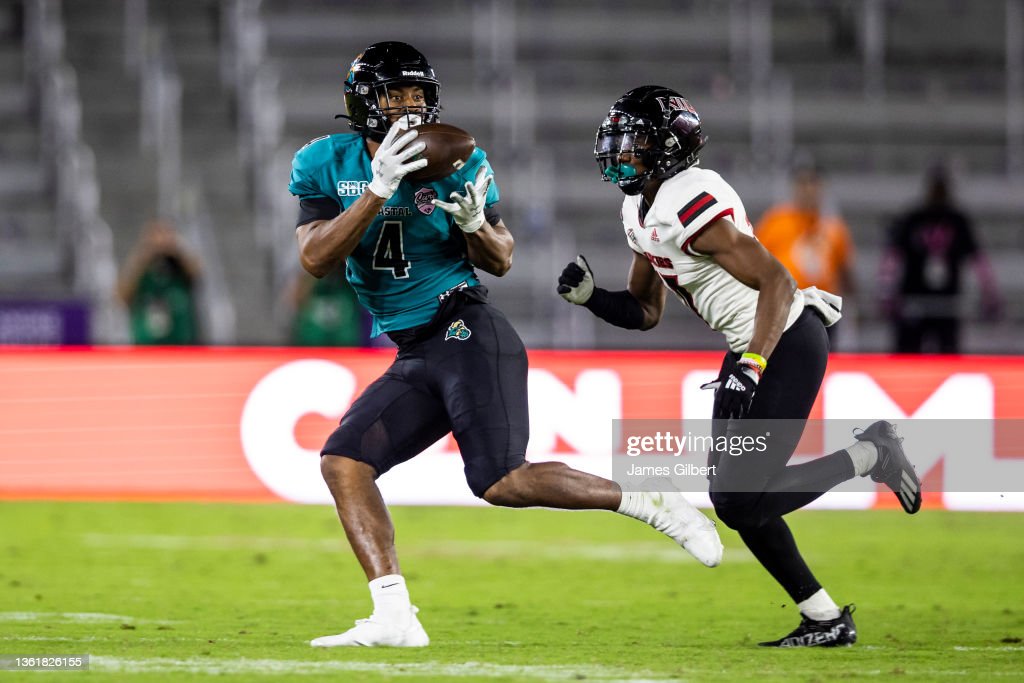 From now until the 2022 NFL Draft takes place, we hope to scout and create profiles for as many prospects as possible, examining their strengths, weaknesses, and what they can bring to an NFL franchise. These players could be potential top 10 picks, all the way down to Day 3 selections and priority undrafted free agents. Today, I’ll be profiling a tight end prospect that transitioned from wide receiver in high school to become a big-play threat at the collegiate level in the passing game for a Group of Five school.

— Has good height and an athletic build for the position
— Is a team-first, selfless player, playing through injury in 2020 and opting to play in team’s bowl game as a senior
— Highly-accomplished man off-the-field as a scholar athlete
— Move TE that played in-line, at the wing, at the H-Back, in the slot, and out wide
— Has good play speed and explosiveness for the position
— Vertical threat at TE that can stretch the field down the seam or up the sideline
— Shows enough burst to get on top of defenders in coverage as a big-play threat
— Can generate separation out quick outs as well as post corner concepts
— Has a knack of making splash plays in the passing game
— Solid at comeback routes, being able to drop his hips to decelerate at break back to the football
— Well-utilized on jet motions to get him the ball in space or on TE shovels to snek him receptions in short yardage situations
— Does a good job adjusting to low thrown balls or making plays outside his framework
— Has good body control paired with the leaping ability to make jump ball catches in contested coverage
— Looks to create after the catch both with his athleticism as well as his toughness
— Aggressive, willing blocker that shows plenty of effort when asked to aid in the run game
— Can climb to the second level to pick up LBs, work out wide in the screen game against DBs, base block against edge defenders, and will pull across the LOS on counter/outside runs
— Runs his feet on contact and will look to take his man out of the play, blocking to and through the whistle

— Lacks ideal bulk and overall length for a traditional TE prospect
— Testing speed doesn’t match up to play speed on tape
— Isn’t a sudden athlete with dynamic quickness
— Can be more consistent and landing and sustaining blocks in the run game
— Will lunge forward into his blocks at times, allowing defenders to fall off and make the play
— Can do a better job controlling the block with his hands to prevent defenders from working around him
— Can be more refined as a route runner over the middle of the field to generate more separation
— Occasionally misses potential completions due to lack of being on the same page with QB/ not being ready for catch out of his breaks

Coastal Carolina’s Isaiah Likely benefitted from the Chants recent success of the football field the last couple of seasons, getting more exposure in the spotlight for a program that just reached the FBS level only a few years ago. However, plenty of the success the team has had on the offensive side of the football has to be attributed to Likely, a former WR recruit who transitioned to TE and has thrived in Coastal’s offensive system. While he looks more like a pumped-up WR rather than a traditional “Y” TE, Likely has shown he versatility during his years with the program, playing all over the formation from in-line, at the wing, at the H-Back, in the slot, and even out wide.

When you watch Likely on tape, you see a plus-athlete at the TE position that thrives in the move/ “F” TE role, allowing him to be schemed up all over the formation to take advantage of matchups. He can play in the backfield and go in-motion for quick dump offs in the flat, allowing him to use his speed and athleticism in space like we see on this TD catch-and-run against Arkansas State, catching the pass and hitting the accelerator as he runs to the end zone for the score.

For being 6’4 1/2”, 245lb, Likely moves well for his size and does a great job stemming his routes at the top of his breaks. He is a good target near the sideline, having the body control and sure hands to secure the reception like we see on this quick out route that he brings in while immediately getting hit. Likely manages to keep his balance, however, and would have run for additional yardage had he have not been taken out of bounds.

Likely is a sure-handed receiver in the passing game, having the hand size paired with the body type to win contested catches in possession down situations. Check out this catch Likely makes against Kansas where he runs up the seam from the in-line position on a skinny post. The ball is thrown slightly behind Likely who manages to adjust and turn his body back to the ball, securing it to his torso as the defender attempts to rip at it to force the incompletion.

Likely’s frame and leaping ability also make hm an ideal red zone weapon when the offense is in scoring range. He has the leaping ability to climb the ladder and attack the football at its high point over smaller defenders tasked with covering him. Watch this score Likely brings in as he aligns in the slot to the right and hits a hard jab step to the right, getting the DB to bite as he breaks back inside and leaps into the air to snag the jump ball for the TD.

Here is another example of Likely going up to catch a jump ball attempt against the Red Wolves on a corner route to the back of the end zone. He leaps into the air and secures the catch to his chest with a defender sticking his arm in to try and rip the ball out, all-the-while coming down with both feet in-bounds for the heads up play and the score.

Along with being a chain mover and a red zone weapon, Likely brings the big-play threat in the passing game that a lot of TEs in this class don’t have. He has five 50+ yard TD receptions in his career, speaking to his ability to create after the catch as a runner. Here are two of those receptions that both came against Arkansas State where both scores come on blown coverages, but we still get to see Likely’s playmaking ability after the catch in the open field.

Isaiah Likely will get dinged by some scouts and draft analysts for not having the ideal, traditional frame to be an in-line blocking TE. While he may have a slenderer build, Likely has shown to be more than willing as a blocker and plays with impressive effort when asked to get down and dirty in the run game. Likely is especially effective as a second-level blocker as you can see on these clips against Kansas, locating the defensive back from the slot as well as the H-Back position and proceeds to run him into the sideline on the first clip and all the way to the end zone on the second clip to spring the successful runs.

Likely takes pride as a blocker, running his feet on contact as he looks to aggressively drive the defender off his spot. Here is a good example where Likely lines up in-line on the right side of the LOS and engages the edge defender on the snap, getting his left arm inside his chest as he works to run him down field. The defender gets across Likely’s face, but Likely continues to block, pushing the defender to the benches on the sideline through the echo of the whistle.

This is not to say Likely is an elite blocker by any means as he does struggle with consistent positioning on his blocks and the fact that he likes to aggressively lunge forward into defenders, resulting in them falling off his initial punch to make plays. We see that he on this block attempt where Likely tries to pick up the linebacker but leans too far forward while dropping his head and shooting his hands, resulting in the defender easily getting across his face to make the tackle.

However, in any offense where Likely is require leading up the hole or around the corner, he can thrive as that move H-Back/TE hybrid, having the aggressive demeanor as well as the athleticism to get on the block and make the play to spring the runner like we see on this back-to-back plays against Northern Illinois.

Overall, Isaiah Likely is a former WR convert that has transitioned well to the TE position, being quite the player both on and off the football field. He is capable of gashing defenses as a receiver after the catch and being a legitimate threat in the red zone, but he also is selfless in his willingness to contribute as a run blocker from a variety of different spots. He needs to continue to get stronger to maximize his body and his ability as a blocker at the next level, but his prowess as a receiver at the next level paired with his impressive character should be enticing to teams looking for a new age “F” tight end that can play all over the formation.

When watching likely and his ability to create after the catch as well as his usage as a blocker, I thought of New England Patriots TE Jonnu Smith as a realistic pro comparison. Smith may be a tad shorter than Likely (6’2 5/8”) and be a little more dynamic as an athlete, but he too is seen as an “undersized” TE that fits more of the move TE role in an offense. Smith also comes from a small school in Florida International where he excelled at creating after the catch, being a reliable weapon in the red zone, and contributed as a quality blocker like Likely at CCU. The weight, arm length, and explosive jumps are almost identical as well between the two prospects.

Smith ended up getting selected in the third round of the 2017 NFL Draft, and I can see Likely also going somewhere on Day Two in this year’s draft class. Some teams may be low on him because he doesn’t project as a traditional in-line TE, but his skill set should make him an enticing option for creative offensive coordinators that want to utilize his versatility both as a receiver and blocker. The Pittsburgh Steelers may not be inclined to take a TE early, but they could use another weapon in the passing game and the thought of having likely and Pat Freiermuth out in two TE sets sounds enticing. Regardless, Likely should look to see the field soon and develop into a quality starter.