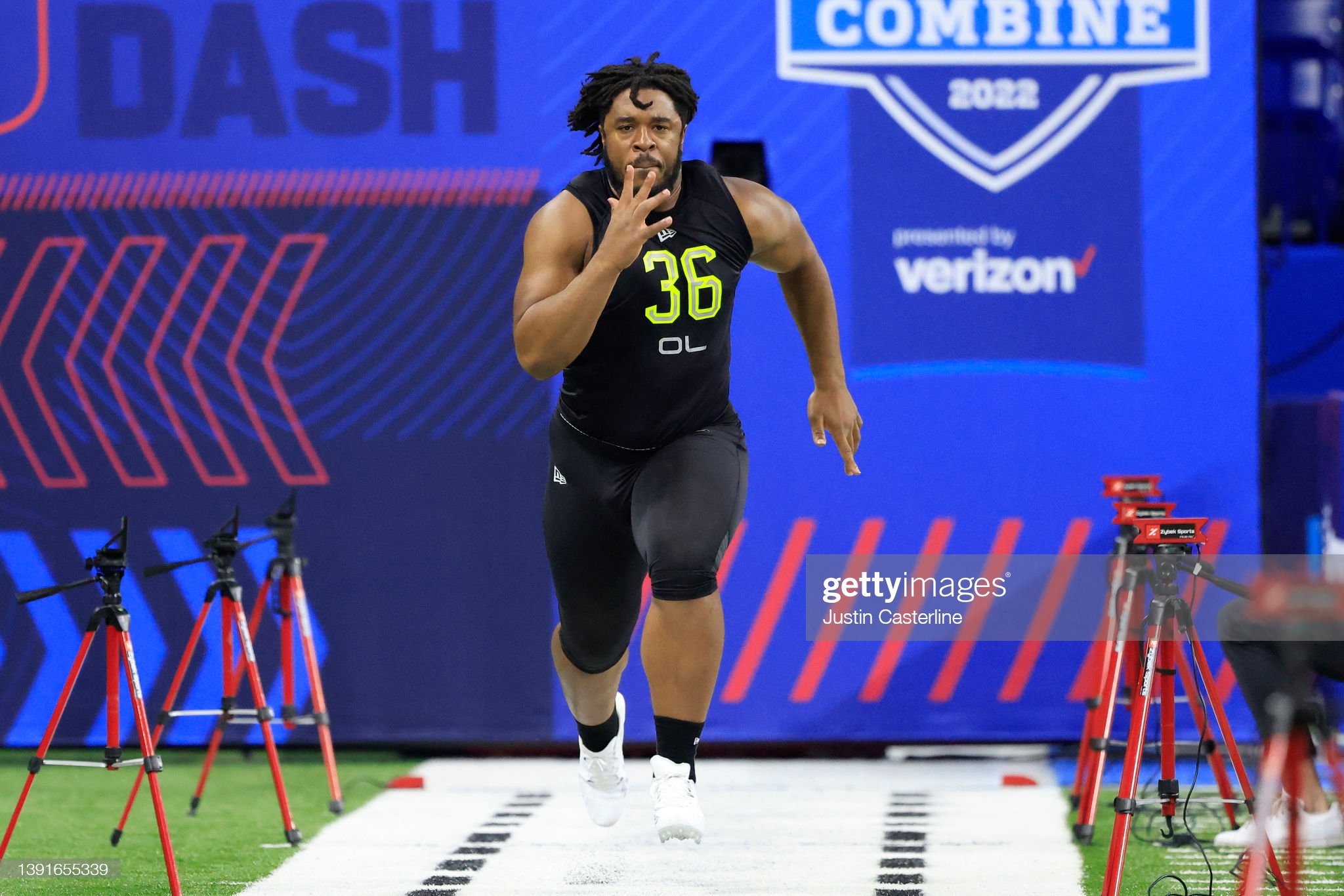 From now until the 2022 NFL Draft takes place, we hope to scout and create profiles for as many prospects as possible, examining their strengths, weaknesses, and what they can bring to an NFL franchise. These players could be potential top 10 picks, all the way down to Day 3 selections and priority undrafted free agents. Today, I’ll be profiling an offensive line prospect that has played all over the line during his time in college, bring versatility and experience with him to the league at multiple spots.

— Position-versatile play that can play either guard spot and has experience at RT along with center exposure at the Senior Bowl
— Has long arms and big hands to latch onto interior defenders quick across the LOS
— Has a dense, thick lower half with good flexibility
— Has good play strength at the point of attack to move defenders off their spot
— Plays with a wide base and uses choppy steps to displace defenders in the run game
— Possesses the short, stocky frame and lower body/core strength to anchor in against power rushers in pass protection
— Can drop anchor or drive his feet into the ground when extended in pass protection to stall the rush
— Short stature gives him leverage to get underneath defensive linemen and get hands on their chest with his punch
— Does a great job turning the defender’s shoulders away from the ball to create a natural running lane for the runner
— Actively works to recover in pass protection when initially beaten by the rush to keep QB clean
— Keeps his head on a swivel looking for work
— Does a good job picking up stunts and twists up front

— Size will limit effectiveness in some blocking schemes
— Short, stocky frame makes it difficult to pick up defenders out in space
— Will get up to the second level, but doesn’t have great lateral movement skill to pick up defenders working to evade the block
— Can stand to do a better job sustaining blocks past first punch
— Slow when asked to pull and get the kick out block
— Will allow defenders to cross his face due to limited foot quickness in mirror
— has shown ability to reach block, but lack of athleticism and size make it difficult for him to consistently get it done

Dylan Parham has had quite the transition to the offensive line prospect that he is today heading into the 2022 NFL Draft. Originally a fixture at linebacker in high school, Parham moved to the offensive side of the ball in his senior year to play as a run-blocking TE, the position he was recruited to play at Memphis. Parham also starred on the basketball court as well as on the track in high school, even participating in the Junior Olympic Championships as a triple jumper. Fast forward to today and Parham tips the scales at 313lb and has started 50 games on the offensive line at left guard, right guard, and right tackle for the Tigers.

When you pop in the tape on Parham you see a short, stocky blocker that specializes at moving straight ahead in the run game. His has a dense lower half that helps him anchor in pass protection as well as displace defenders off their spot once he gets his feet going. We see that on this rep against Houston as Parham absorbs the contact of #92 Logan Hall and then proceeds to drive his legs and lock out his arms as Hall attempts to fight off the block to the runner, sending him on skates into the second level.

Parham does a great job turning his opponent’s shoulders away from the football to create a running lane for the back to exploit off his backside. Here are a couple of examples of Parham using his leverage and strength as a blocker to turn a defender away from the hole he creates, allowing the runner to go up the gap and into the second level.

Parham has also shown the ability to reach block from the interior on nose tackles and interior defensive linemen from both the guard and center spots. He never played center in college but represented himself well there during the Senior Bowl as we see on this rep where he reaches DL John Ridgeway to spring the runner for a long run into the secondary.

In-between his experiences at either guard spot, Parham was asked to man the RT spot in 2020 in which he represented himself well. While his lack of height and size likely takes tackle off the likely positions he will play at the next level, Parham has several reps that stand out on tape like this one against #21 Myjai Sanders that bring back flashbacks of former Steeler OT Kelvin Beachum who shares a similar short, stocky frame as Parham.

What stands out the most when watching Parham is his lower body thickness and density. He has thick legs and the hips to drop anchor against bull rushers as mentioned earlier, being able to stall the rush. Here against Florida Gators DL Zach Carter, Parham gets his hands inside Carters shoulders on the rep, playing with a wide base and short choppy steps to anchor in in pass protection to keep Carter from getting to the QB inside the pocket.

However, when watching Parham, there are several things that stick out on tape that need to be addressed as potential limitations as he transitions to the league. He is objectively better firing out across the defender across from him rather than getting out in space or climbing to the second level, lacking the ideal foot quickness and reach to pick up defenders consistently in space. Here on this rep against the Cougars, Parham fails to get off the double team in time to climb up to pick up the backer who ends up making the play on the back unblocked.

Parham also tends to be loose with his hand placement at times in his fits and will allow defenders to cross his face like we see on this rep against Mississippi State as Parham allows the defender to control his inside shoulder and counter back inside to make the play on the runner.

Parham also can stand to do a better job sustaining his blocks for longer periods of time as he will often the defender fall off the block after first contact. Parham doe a great job covering up the linebacker for the Bulldogs on this rep but fails to run through the block as the defender gathers himself and redirects to make the play on the running back with Parham looking on.

Overall, Dylan Parham is an experienced four-year starter at multiple positions on the line that figuratively should be able to play any of the interior spots. He should be best suited for either guard spot to start and play his best ball in a phone booth but could get some run at center should teams be comfortable with his projection after his week at the Senior Bowl. Still, Parham’s lack of size and movement skills likely makes him a fit in more power/gap schemes at the next level rather than zone schemes since he is much better playing straight ahead than playing on the move.

When thinking of a pro comparison for Parham, Beachum did come to mind due to the similar size and play based on his tackle tape, but former Louisville Cardinals OG John Miller is a more sensible comparison for Parham’s projection to play inside at guard. Miller has a similar squatty frame (6’2 1/2”, 303lb) with similar arm length (33 1/4”) and hand size (10 1/4”) along with explosive testing (27.0” vert, 8’8” broad). Miller also excels more as a run blocker rather than a pass blocker and appears to be limited by scheme but can be a solid player that was selected in the third round of the 2015 NFL Draft.

I see Parham going in a similar range later on Day Two as a guy that may have more position versatility than Miller but should project to be a similar player that uses his shorter frame well in the running game and can anchor in pass protection, but can be limited as a pass protector based on his size and movement skills, thus leading to potential up-and-down play at times unless he improves his technique.

The Pittsburgh Steelers could use depth at both guard and center and haven’t been shy of showing interest in Memphis players in the past. Still, giving the fat they already have undersized centers in J.C. Hassenauer, Kendrick Green, and Mason Cole on the roster, adding Parham would feel a little redundant as they may lean toward a player with a better size profile to compliment what they already have.