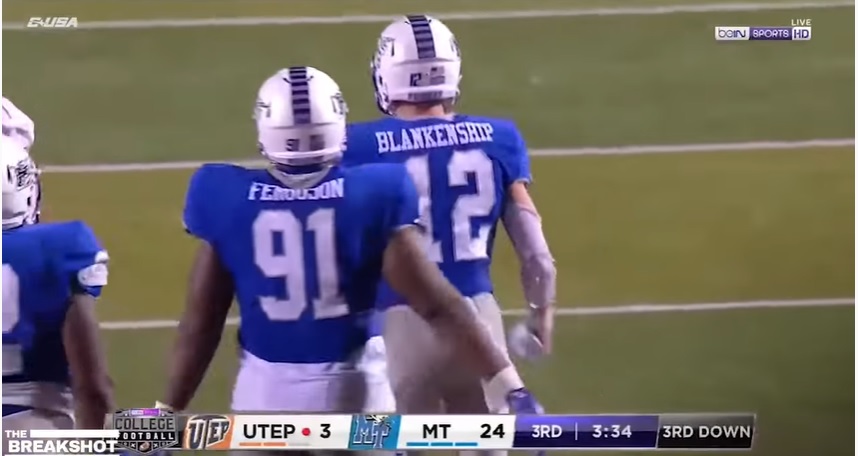 From now until the 2022 NFL Draft takes place, we hope to scout and create profiles for as many prospects as possible, examining their strengths, weaknesses, and what they can bring to an NFL franchise. These players could be potential top 10 picks, all the way down to Day 3 selections and priority undrafted free agents. Today, I’ll be profiling and defender who racked up over 400 tackles in his collegiate career.

— Playing deep focuses too much on quarterbacks eyes
— Will be looked off by QB and allow receivers behind him
— Tight hipped; not a fit for Man coverage on WR’s in slot
— Adequate COD and acceleration to match breaks
— Marginal disengaging from blocks
— Poor angles coming to the ball downhill leads to misses/lunging
— Marginal spatial awareness working through traffic

From early in his freshman year Reed Blankenship made his mark on the field starting over fifty games and filling up his stat sheet. He has good size and solid speed and was used in variety of ways from the deep safety to the slot and as an overhang defender.

Against the pass, as the deep safety he was most often used in Cover 2 and Cover 3 and has solid range to the sidelines. He is decisive when he comes down hill and has solid speed. In the slot, he is solid in Man covering tight ends and was used to blitz as well. He is solid recognizing screens and gets downhill quickly. Playing in the underneath Zone areas he has solid awareness and will aggressively break on the ball to try to get into the passing lanes having solid ball skills and production.

At Virginia Tech, from the slot Blankenship (12) will get downhill quickly to make the stop.

At UConn, from the split safety he’ll make a play on the deep ball on the sideline that he tips up for a teammate interception.

At Charlotte, playing Zone in the slot he gets a good jump to undercut the outside receiver to break up the pass.

Against the run, while playing near the line of scrimmage he is a good supporter against the run and is good playing under control and breaking down to make tackles. His mental processing to read the run game is solid and he flows to the ball well. He aims low and is able to wrap up solidly and he will fill inside when needed. He displays very good effort always flowing to the ball and is will make tackles on all levels.

Against Charlotte, playing near the line of scrimmage he reads the run well and makes a couple nice tackles

At Charlotte, when he plays under control he is very good tackler.

When playing deep he focuses heavily on the quarterback and will lose his depth allowing receivers behind him. He will follow the quarterback’s eyes and jump the underneath routes getting looked off the deeper route. In Man coverage, he is tight hipped and has marginal change of direction and would not be a good match to cover wide receivers in the slot. He needs to improve his hand usage taking on blocks and also disengaging from blocks.

At Virginia Tech, he will read the quarterback’s eyes and jump the out route and the slot receiver runs by him for a big play.

When coming downhill from the deep safety he takes poor angles and doesn’t break down making him out of control forcing him to lunge and miss or not get a hand on the ball carrier. He has marginal play strength when making tackles and doesn’t drive through the ball. His spatial awareness is adequate seemingly hyper focus on where he is going not seeing the bodies in his way.

Here are a few examples of him taking bad angles to the ball leading to big gains.

Overall, Blankenship is a solid athlete with good size and solid speed with experience playing deep, slot and overhang positions. He has solid range from the split safety, gets downhill quickly and has solid ball production. He can cover tight ends in Man and aggressively tries to get in passing lanes in Zone. Against the run he is best near the line of scrimmage, flows to the ball well and makes solid tackles in the short area.

Areas to improve include understanding route combinations and his over aggressiveness reading the quarterback’s eyes. As a tackler coming from the deep safety he must break down sooner and take better angles. He needs to disengage from blockers and work through traffic more efficiently.

While he was extremely productive in college and his tackle numbers could have been even higher with better angles. He is capable of playing a split safety but his best spot would be near the line of scrimmage. There he is a strong tackler against the run and can try to jump underneath routes. He could be a fit a sub-package player in nickel/dime as third safety and would be a core special team player.

He’ll have to compete for a roster spot but it won’t be from a lack of effort. For a player comp I’ll go with George Odum who was an undrafted free agent who has carved out a career as a special team and sub-package player.

Games Watched: 2021: Vs Virginia Tech, At UConn, Vs Western Kentucky, At Charlotte