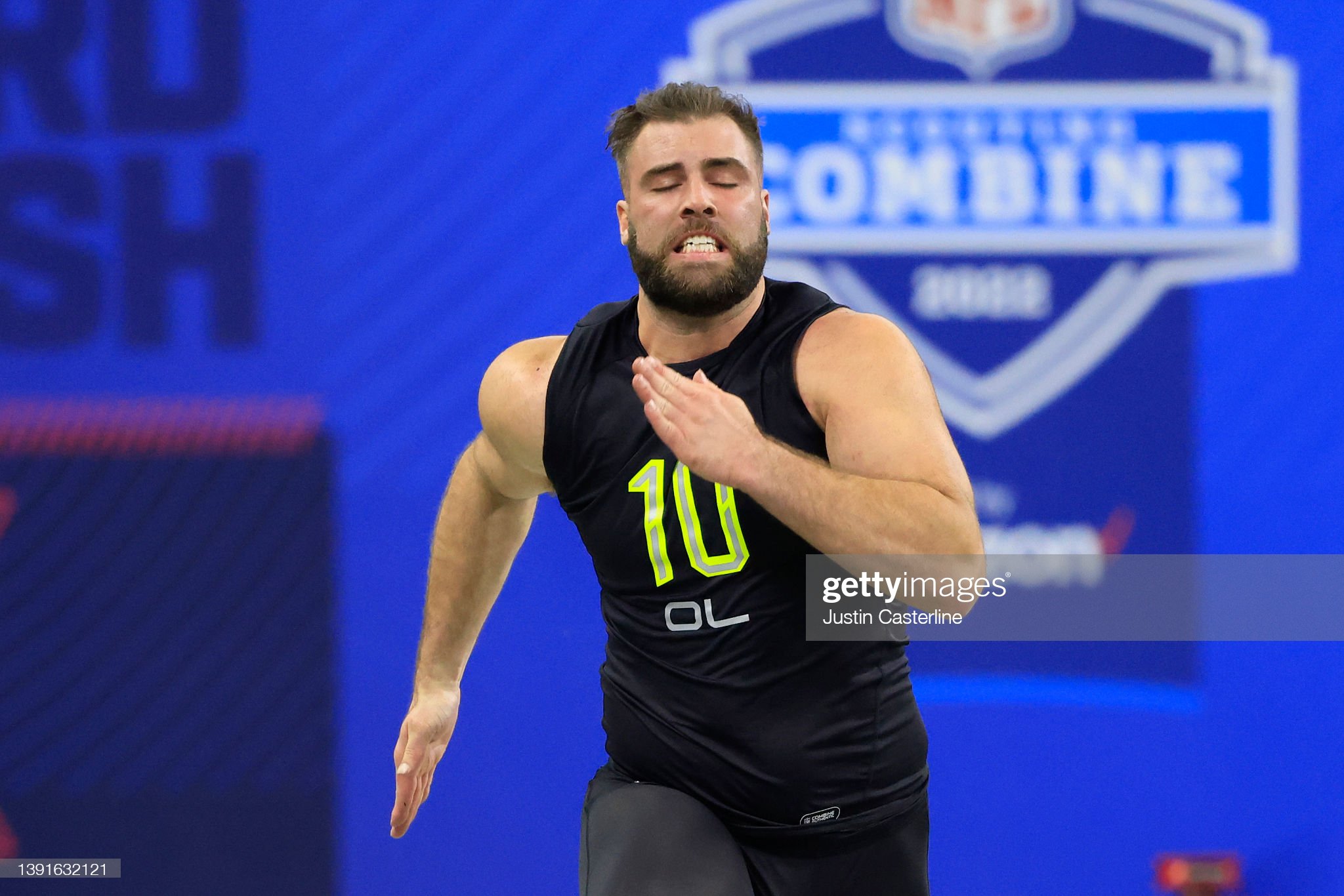 From now until the 2022 NFL Draft takes place, we hope to scout and create profiles for as many prospects as possible, examining their strengths, weaknesses, and what they can bring to an NFL franchise. These players could be potential top 10 picks, all the way down to Day 3 selections and priority undrafted free agents. Today, I’ll be profiling an offensive tackle prospect that transitioned from the SEC to the PAC-12 and has several enticing traits teams look for at the position.

— Has good size with the height you look for in a prototypical NFL tackle
— Highly athletic player for the position, having the ability to play in the open field on the move
— Has the quickness to make reach blocks, pull to the outside, and climb to the second level
— Movement skills make him a good fit in inside/outside zone running schemes
— Does a good job running hip to hip with guard on double teams
— Footwork in pass protection is smooth and fluid
— Has a strong, inside punch to get into the defender’s torso
— Has good core strength to absorb blocks in pass protection
— Plays with good recognition of games up front, picking up twists and stunts
— Does well with his mirror in his lateral movement to prevent defenders crossing his face

— Has shorter arms compared to his body length
— Needs to fill out his lanky, power forward like frame
— Is a lean tackle prospect that lacks sand in the pants to generate power off the ball as a run blocker
— May struggle anchoring against NFL power rushers who can convert speed to power to knock him off his base
— Has short steps in his kick step, having trouble setting the depth of the pocket
— Footwork can be short and choppy, allowing defenders to get around the corner
— Play strength needs to improve to redirect defenders who beat him around the edge or inside
— Struggles driving out and blowing defenders off the ball with power
— Base tends to narrow when engaged, limiting his effectiveness as a run blocker
—Picks up his fair share of false start and holding penalties

— Redshirt Senior prospect from Trophy Club, TX
— Highly-touted recruit in the 2016 class, earning four-star distinction from all major recruiting services and signed with his in-state school, Texas A&M
— Redshirted his first season on campus in 2016
— Played in one game as a redshirt freshman in 2017
— Played in nine games in 2018 as depth along the offensive line
— Played in 12 games in 2019 where he served as the backup left tackle and playing on special teams
— Decided to move on as a graduate student to Arizona State for the 2020 campaign
— Started all four of the Sun Devils’ games at left tackle in a limited 2020 season and was nominated honorable-mention All-PAC 12 by league coaches
— Started all 13 games on the blindside in 2021 and earned second-team all-conference honors
— Had the highest graded tackle in the PAC-12 according to Pro Football Focus in 2021

Kellen Diesch took the long road to put himself in position to become an NFL prospect this offseason. He started out on top of the world in Trophy Club, TX as a top 10 OT recruit and consensus four-star prospect, opting to stay in-state and play at College Station for the Aggies. After failing to crack the starting lineup in four seasons, Diesch grad transferred to Tempe, AZ to earn a starting job with the Sun Devils on the blindside where he went on to pick up conference honors in two seasons as a starter.

When you watch Diesch on tape, you see a tall, lean, athletic tackle prospect that has good mobility for his size. He is a good athlete out in space as evidenced by his testing at the NFL Combine, doing some of his best work when on the move in the run game. He is an example of Diesch kicking out the defensive end on the outside zone run to the left, allowing the running back to run off his backside for a nice gain.

He is a fluid mover out in space, having the ability to pull, get out on screen passes, and climb to the second level effectively. Here against BYU, we see Diesch get out on the screen pass and pick up the backer at the second level, taking a good angle to the defender and run him toward the sideline away from the football.

Diesch also is effective in close quarters, playing with good splits next to the guard on double teams as well as to cut off defenders from penetrating inside. Watch this block Diesch makes on the edge to spring the tail back to the outside for the score, walling down the defensive lineman from the edge.

Diesch plays with good hand placement inside the defender’s chest in pass protection, showing a rhythmic feel where he doesn’t panic and adjusts to the rush. Here is a two-play sequence against the Cougars where Diesch picks up the rush on the edge, putting the defender on the ground the first play, and neutralizes the pass rusher on the second play to keep the QB clean.

Diesch has good lateral movement skills to mirror the defender across from him on the LOS along with the quick feet to redirect and cut off the rush side to side. Here is one example against the Utes where Diesch cuts off the edge against the edge rusher, then redirects inside to prevent the counter, keeping the defender from penetrating the pocket.

Still, the same can’t be said for Diesch’s footwork when it comes to setting the depth of the pocket in pass protection. He takes short, choppy steps that can be erratic, thus allowing pass rushers to be able to get the corner on him. Here are a few examples of Diesch failing to cut the defender off from getting around the edge, playing with slow, uneven footwork paired with the lack of punch and grip strength to prevent the defenders from getting into the pocket for the pressure or the sack.

Even when he is in position, Diesch fails to drive out of his stance, lacking needed power and functional strength to displace defenders in the running game. He also lacks the power in his punch, coupled with the fact that he has sub-optimal arm length which leads to plenty of holding penalties when defender work off his block and he grabs hold like on this rep against Utah.

Diesch also doesn’t have the length or high-end athleticism to redirect once beaten around the corner. His rep against BYU clearly shows that Diesch messed up by not picking up the defender coming off the edge, but additional length and power would’ve have helped him have a better chance redirecting the pass rusher around the arc of the pocket. Either way, the lack of awareness and the functional issues show up in this play that end up in a clean sack for the defender.

Overall, Kellen Diesch is a lean, athletic tackle prospect that hasn’t had a lot of starting experience and has shown substantial growth in his two years as a starter. He is mobile and a fluid mover for his size and would be best served playing in a zone-blocking scheme where he can use his strengths in his movement to his advantage while covering up his deficiencies of strength and power at the point of attack. Still, his inconsistent footwork in pass protection and lack of arm length can make consistently protecting the edge a chore along with the fact that he needs to add size and strength to his frame to better withstand power rushers.

Diesch can develop into a rotational tackle who may have some swing ability if he adds bulk, mass, and overall strength to his game. While watching Diesch, I compared his game as well as his measurables to current Dallas Cowboys OT Josh Ball. Ball too transferred from Florida State University to Marshall University where he too showed good movement skills paired with a long 6’7, 308lb frame. Still, he lacks functional play strength and will allow defenders around the corner with inconsistent footwork, being more of a project like Diesch. Ball ended up getting drafted by the Cowboys in the fourth round of the 2021 NFL Draft.

I see Diesch going in a similar range as Ball did last year, following a similar development plan of working on overall technique whilst adding size and strength to his frame to capitalize on the frame and athleticism he brings to the table. Pittsburgh could use another tackle to push Dan Moore Jr. or Chuks Okorafor, but Diesch seems like a prospect that is a couple years away from playing meaningful snaps as a starter. When also considering Diesch’s poor rm length which is something OL Coach Pat Meyer looks for, I would be surprised if Diesch was drafted to be a Steeler.