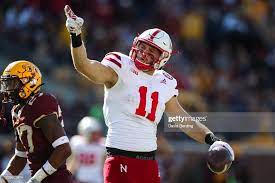 From now until the 2022 NFL Draft takes place, we hope to scout and create profiles for as many prospects as possible, examining their strengths, weaknesses, and what they can bring to an NFL franchise. These players could be potential top 10 picks, all the way down to Day 3 selections and priority undrafted free agents. Today, I’ll be profiling a tight end prospect that is recognized as a team leader for this Big Ten school and has been considered underutilized in the offense during his time in college given his size and receiving prowess.

— Possesses elite size and length at the position
— Voted team captain and respected as a leader in the locker room
— Played out wide, in the slot, at the H-back, wing, and in-line in the formation
— Has the wingspan and frame to make catches outside of his framework
— Effectively wins the jump ball in 50/50 ball situations with defenders contesting coverage
— Ideal target in the red zone or on possession downs when QB needs to throw the ball up to avoid getting hit
— Tough as nails over the middle, being willing and able to play through contact to come down with the catch
— Fearless pass catcher that puts body out there for certain punishment in attempt to make the catch
— Skyscraper frame and leaping ability allows him to rise up with defenders all around him in middle of the field to pluck ball out of the air
— Has fairly sure hands as a pass catcher and can adjust body to balls thrown away from him
— Well-utilized in TE delay throws up the seam or crossing the middle of the field
— Strong option in play action to get him freed up with room to run
— Long frame and size allow him to fight for extra yards after the catch and stretch out for the first down
— Willing blocker that will extend his arms and run his feet on contact
— Has played various special teams units and should figure to contribute in that area in the pros

— Clunky mover with poor long speed and burst for the position
— Will struggle to generate separation against man coverage if he can’t win with his size
— Slow out of his breaks and can telegraph his route at times to defender in coverage
— Isn’t a threat to run away from defenders after the catch unless he has loads of green grass
— Doesn’t possess much shiftiness as a runner to make defenders miss
— Needs to continue to get stronger and add more mass to his frame to play in-line
— Struggles to sustain his blocks past initial contact, having defenders fall off constantly
—Will lunge forward and play with his pads too far forward his toes as a blocker
— Needs to watch pad level and hip/knee bend as a blocker to play with better leverage given his long frame
— Will allow defenders into his chest and to rip off blocks, needing a stronger punch and forceful grip to control his block
— Will turn 24 during his rookie season

— Redshirt Senior prospect from Aurora, NE
— Born November 10, 1998 (age 23)
— Father was a walk-on for the football team in 1981, before transferring to Doane College
— Regarded as the consensus top prospect in the state of Nebraska in the 2017 recruiting class
— Played TE and LB in HS and was an All-State selection on the basketball court
— Sat out as a redshirt in his first season in 2017
— Played in all 12 games as a redshirt freshman in 2018, catching two passes for 54 yards
— Played every game in 2019 and started five and caught seven passes for 83 yards while also contributing on special teams
— Played in all eight games with seven starts in 2020 and had 18 receptions and 236 receiving yards (13.1 YPR) and a TD
— Started all 12 games in 2021 and caught 38 passes for 602 yards (15.8 YPR and two TDs
— Had the most season receptions and season receiving yards by a tight end in Nebraska history in 2021
— Team Captain (2021), Big Ten Tight End of the Year (2021), First-Team All-Big Ten (2021, Media), Second-Team All-Big Ten (2021, Coaches), Nebraska Offensive MVP (2021)
— Academic All-Big Ten (2018-2021), Nebraska Scholar-Athlete Honor Roll (2017-2021) — Earned his bachelor’s degree as a mechanized systems management major in May of 2021
— Volunteered his time with local hospital and school outreach, the FCA, the Buffett Cancer Center, Husker Heroes, the Black History Arts Showcase and the Nebraska Football Road Race

Austin Allen from Nebraska is an interesting case of tape versus production. While he was touted at the #1 prospect in the state coming out of 2017, Allen was hardly utilized in the Cornhusker offense up until his final season in college where he ended up breaking the school’s all-time reception and receiving yardage marks. The 67’ 5/8”, 253lb TE starred in HS as a power forward on the hardwood, earning all-state honors for his play in the paint. You can see that skill set transfer over to the gridiron with his ability to attack that ball in the air and high point it at the rim like on this completion against Michigan over the middle of the field.

Allen’s size, leaping ability, and wingspan make him the ideal 50/50 ball receiver in contested catch situations, providing his QB with a large target with an extensive catch radius to go up and make a play. Allen is also a fearless competitor at the catch point, putting his body at risk against certain contact from defenders to have the opportunity to make a play for his team. Here are a couple of examples of Allen skying up to make the grab whilst getting drilled by defenders flying in, managing to hold onto the ball and complete the catch.

Allen’s size and catch radius also make him a viable weapon in the red zone, having impressive body control for his size to be able to adjust to balls in the air to make difficult catches in coverage. Here is one example against Minnesota where Allen reels in a fade to the corner of the end zone, snagging the ball while parallel to the ground and secures the catch while contested in tight coverage by the safety.

He’s dangerous up the seam and on play action passes where he can get into open space and use his size to his advantage, bringing in receptions that make for easy completions for his QB. Here are a couple examples of Allen being used up the seam , on the intermediate crosser, and on the corner route on play action, catching the ball in space with room to run.

Allen is a player that had to earn his way onto the field, thus having to cut his teeth on special teams units to start his career. He has adequately played on kick and punt coverage units and has done well there, even recording this botched punt from Northern Illinois for a big swing of momentum in the game.

Still, Allen has his fair share of limitations when it comes to being an NFL prospect. He lacks impressive speed, explosiveness, and quickness as a receiver, playing with more of a plodder speed level that can use his size to pick up extra yards, but isn’t going to turn away from anyone. Allen is also fairly lean for his size, lacking the mass and play strength to hold his own as a blocker in the run game. The want-to is there, but he is too easily shed on blocks and plays too far forward over his feet as you can see in the clips below. Allen will have to continue getting stronger and add more functional mass to his frame for the NFL.

Overall, Austin Allen is a TE prospect that has been underutilized in college for what he presents as a receiver, being a moveable chess piece that presents mismatches with smaller defensive backs and linebackers for a TE with immense height and length. He is a clear red zone weapon and can be a reliable chain mover for an offense yet lacks high upside due to limited athleticism. Still, Allen needs to get stronger and add more functional mass to his frame to optimize his ability to play a true “Y” TE role in an offense while still being able to move around the formation.

I thought about comparing Allen to former Stanford TE Colby Parkinson who I used as a comp for Chase Allen, but former UCLA TE Joseph Fauria came to mind as another nearly identical pro comparison for Austin Allen. While the two men are vastly different in character, Fauria has a near identical frame to Allen (6’8, 259lb) along with very similar testing results in terms of athleticism (4.77 40, 35.5” vert, 10’0” broad). Fauria starred as a receiving threat at TE for the Bruins yet wasn’t known for being an accomplished blocker. He signed with the Detroit Lions as a UDFA in 2013 and played the role of a red zone weapon and possession down/contested catch guy, nearly identical to Allen’s skill set.

I foresee Allen being selected at the end of the 2022 NFL Draft or possibly sign as a UDFA for a team much like Fauria did. You can’t teach size and his receiving ability, and his special teams contributions should allow him to make a roster as he works on developing his body to be a TE3 on a depth chart and work into a TE2 role. Pittsburgh would likely want a better blocker at this stage in a developmental TE, but should they opt to pull the trigger on a developmental player at the position, Allen makes a lot of sense given his character, receiving prowess, and mismatches he creates with TE Zach Gentry entering the final year of his rookie contract.