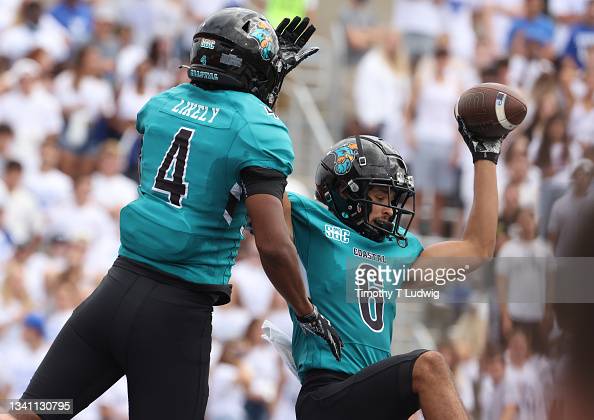 From now until the 2022 NFL Draft takes place, we hope to scout and create profiles for as many prospects as possible, examining their strengths, weaknesses, and what they can bring to an NFL franchise. These players could be potential top 10 picks, all the way down to Day 3 selections and priority undrafted free agents. Today, I’ll be profiling a productive receiver from Coastal Carolina.

— Experience outside and in the slot
— Solid quickness at LOS versus Press coverage
— Most of his production was in the short/intermediate areas
— Good hands; concentration in traffic
— Tracks the ball well over his shoulder
— Very good body control on the sidelines
— Good understanding of Zone coverages
— Solid blocking; will do all that is asked of him

The rise of the Coastal Carolina program has been fun to watch and they are producing some NFL level talent. Tight end Isaiah Likely and Edge Jeffrey Gunter are going to be drafted this year and Jaivon Heiligh would like to join them. He is a receiver who lined up outside and in the slot for the Chanticleers.

Heiligh was used on all three levels but did most of his work in the short and intermediate areas. Against Off Man coverage he was solid getting the defensive backs to turn their hips before he made his breaks and versus Press Man coverage he displayed solid foot quickness to open up space. He did the majority of his work on slants, curls and five to ten yard out routes. Against Zone coverage, he was solid finding the voids and giving the quarterback a good target. He was often uses as the pick/rub player to try to get other receivers open.

Vs Kansas, Heiligh (6) at the bottom of the screen shows some nice foot quickness to move the defensive back on this slant.

Vs Kansas at the bottom he will execute a shake route getting the defensive back to spin around.

At Appalachian State, from the slot he runs the deep over route running away from the defender who had outside leverage for a good gain.

Vs Troy, from the near slot he will run the out and up for a good gain.

Vs Northern Illinois, at the bottom of the screen he will work against the Zone to put himself in view of the QB.

He displayed good hands catching the ball away from his body, is solid adjusting to inaccurate throws and has very good body control on the sideline. In tight windows he shows good concentration, he is solid tracking the ball over his shoulder and after the catch he looks to get up field quickly. In the scramble drill, he will continue to work to try to find open spaces.

At Appalachian State, from the top he can’t create space on this corner route but he tracks the ball well and makes the catch in traffic.

In the run game, he displays good effort to get himself into position. He is willing to chase down a safety, wall off from the slot or crash a linebacker. He will hustle across or downfield to try to help a teammate with an extra block.

Here are a few examples of him blocking in the run game. The first play he is at the top blocking on the sideline, followed by a block from the slot and then going in motion and getting a key block on the linebacker.

His overall speed and acceleration are adequate and won’t stress the defensive backs off the line of scrimmage or downfield. Against Press with jam coverage he has marginal hand usage to work through the jam. Physical defenders are able to push him off his routes. Against Man coverage he does not consistently create space on any level. His route breaks are rounded and lack suddenness. After the catch he doesn’t break tackles or make defender miss often.

Vs Troy on the near side the physical DB is able to push him toward the sideline and he is unable to make a play on the ball.

Overall, Heiligh was used outside and in the slot on all three levels. He does his best work against Off Man and Zone coverage on the short and intermediate levels. He has good hands, very good body control and looks to get up field quickly. As a blocker, he is willing, makes very good effort and not afraid to crash inside on linebackers.

Areas to improve include the sharpness in his route running, handling physical defensive backs and creating space more consistently. Adding play strength could help dealing with defenders and when trying to create after the catch.

Heiligh was productive in college with the tools he has but he lacks the speed and acceleration to be effective on all levels. Most of his production in the games watched was against Off or Zone coverage and creating space on the next level will take improvement. He has some punt return experience so that could help him. He will likely be signed after that draft and be given a chance to compete for an end of the roster spot.

It was hard to find a comp for him but I’ll go with a couple lesser known guys in Noel Thomas and Nelson Spruce who had similar size and areas to improve.

Games Watched: 2021: vs Kansas, At Appalachian State, Vs Troy, Vs Northern Illinois