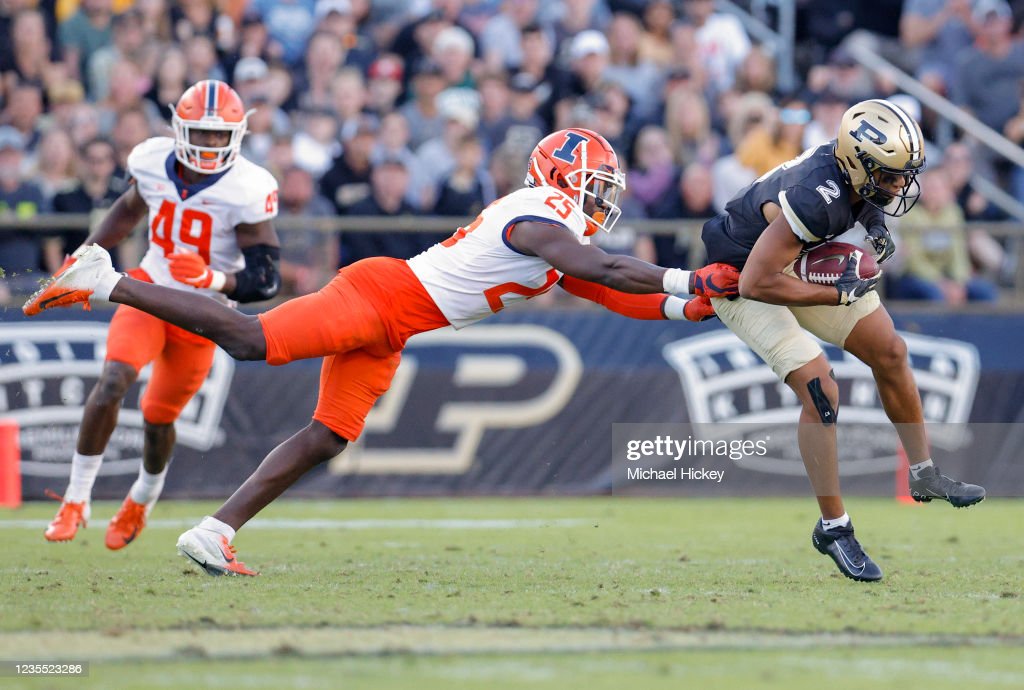 From now until the 2022 NFL Draft takes place, we hope to scout and create profiles for as many prospects as possible, examining their strengths, weaknesses, and what they can bring to an NFL franchise. These players could be potential top 10 picks, all the way down to Day 3 selections and priority undrafted free agents. Today, I’ll be profiling Illinois FS Kerby Joseph.

— Long frame with ability to add some bulk, big hands
— Rangy free safety, excellent ball skills and plays the ball like a receiver
— Tracks it effortlessly in the air while maintaining speed and positioning, ability to high-point the ball and take it away
— Natural ball skills, able to make difficult plays on throws outside his frame
— Shows ability to tackle in open field as last line of defense, want-to as a tackler
— Good and fluid athlete overall
— Special teams experience and value

— Lacks strength and gets caught up in the wash
— Struggles to get off blocks in run game and gets turned out
— Not the most consistent wrap-up tackler in close spaces and doesn’t play with a lot of hit power
— Wasn’t an every down player in school
— One-year starter with scant production until senior year, struggled to see the field on a non-elite team
— Limited number of pass breakups
— Can be late to find the ball and moved by misdirection and playaction
— No 40 time or agility drill data

Kerby Joseph is flying under the radar in a deep and talented safety class. He also didn’t burst on-scene until 2021 when he saw serious and consistent playing time for the first time in his college career. He made the most of opportunity, picking off five passes, tied for the most in the NCAA.

Watching his tape before digging into his bio, I kept thinking “this guy had to be a former receiver.” And he was. That’s how natural his ball skills are. He’s comfortable tracking the ball in the air without losing speed or getting out of position and plays the ball like a receiver in the air. A couple examples.

Another replay from that Wisconsin game.

He’s smooth and fluid and just looks, I’ll use the words again, comfortable and natural around the football. But he tackles better than a receiver and can make open-field stops. He isn’t someone who will lay the lumber but he shows a desire to make the play as the last line of defense.

But Joseph has a thinner frame and and can get pushed around when he’s playing close to the line of scrimmage. He’s easily washed and moved in the run game.

His production was also very limited prior to this 2021 season and even in the games he played, he didn’t always start and was part of bigger, three-safety packages. For a guy who had trouble seeing the field at Illinois, a Power 5 program but not exactly Alabama, that’s a concern in trying to project NFL success. He doesn’t even have a 40 time after tweaking his left hamstring at his Pro Day and not running at Indy. For guys who were on radars more and at junior Pro Days, it’s less of an issue. For a late riser like Joseph, it’s another box unchecked.

Overall, it’s hard to find rangy free safeties with plus ball skills and Joseph checks those boxes. The rest of his tape isn’t bad either. In draft classes that are always teeming with thumping box players, Joseph’s tape is refreshing and makes him stand out. He caught my eye at the Senior Bowl and his tape in coverage was good. There’s some flame-out potential because you’re basing his grade off one year and Pittsburgh doesn’t need a FS but Joseph’s skillset is intriguing if he’s just a late-bloomer. My NFL comp is Reshad Jones.