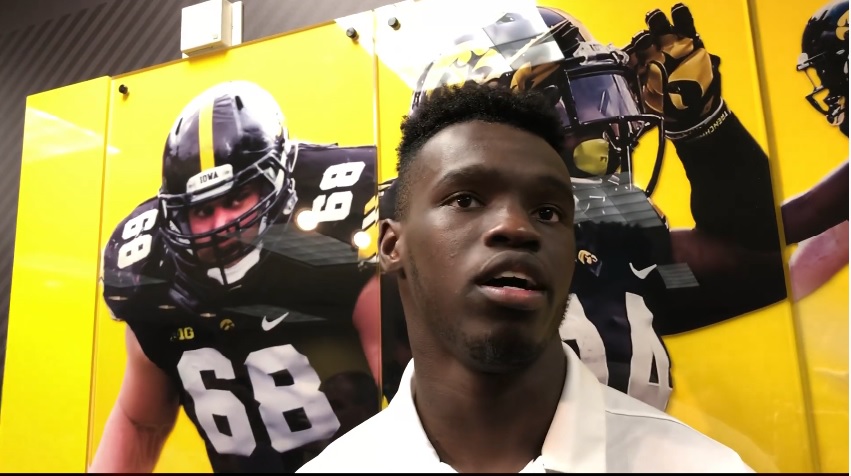 If you saw Alex’s article about the physical traits the Steelers look for in a defensive back there was only one player who checked every box. That player was Michael Ojemudia. The cornerback from Iowa has very good size and length and put up good speed and put up good explosion numbers. The majority of his time was spent on the right with a few reps in the slot or over the TE.

Against the pass, Iowa mixed up there coverages often with Man and Zone concepts. Playing Press Man he played a lot of bail technique, opening to the inside with eyes on the QB. He showed good physicality and quickness to stay with receivers in the short area. In Off Man he showed a solid pedal and enough speed to match receivers early in the route and solid trail technique when playing over the TE inside. In the shallow Zone he reads screens well and is able to shed WR and TE blocks on the outside. He has a good understanding of routes in the underneath Zone with eyes on the QB and in the deep Zone he gets good depth to keep plays in front of him.

Vs Wisconsin, he’s at the bottom of the screen and will read the screen, come up and take on the TE block, shed and make the tackle.

Vs Mississippi State, here is in the choke position lined up inside the TE to the right and does a nice job in trail Man coverage.

Against the run, he is a willing participant to come up and take on blocks or attempt to make tackles. He has solid use of hands to take on blockers and will attempt to spin off to keep the runner inside . He has good mental processing to read the play and try to fill or stay backside to cover cutbacks and reverses.

Vs Mississippi State, he uses his hands well to keep the blocker off of him and makes the play on the outside.

Vs Mississippi State, he’s at the bottom of the screen and will come up to assist on the edge and make a tackle on the RB.

His jam while playing Press was often ineffective missing the target with him more focused on opening up.  He seems to prefer to open to the inside allowing WR’s to get into his blind spot on the outside easily. He is tight hipped and doesn’t maintain his speed after turning allowing receivers to get over the top of him too easily. His balance is adequate within the route and needs to improve on getting his head around with his back to the ball. In Zone, he has adequate COD to click and close and leaves too much space limiting his chance to break up passes. Saw him bite on double moves and didn’t display the speed to make up the ground. His tackling overall is adequate he attempts to tackle too high on the outside and inside he doesn’t wrap well and slid off of several tackles against the run.

Vs Wisconsin, he is in Press Man at the bottom of the screen. He will miss with his jam and open up inside while the receiver goes outside giving up an easy score.

Vs Wisconsin, at the top of the screen he opens his hips too early, bites on the stutter and gets beat deep for a big gain.

Vs USC, he’s at the top of the screen and will turn and run with the WR. The WR catch up to him at about the 30 yard line. 20 yards later the receiver has opened up 4 yards of space behind him.  He was saved but a severe underthrow.

Physically he has a lot of good traits to play DB in the NFL and I like his attitude to support the run. He needs to close his spacing in coverage, improve his Press technique and become a more sure tackler. He has experience playing in a lot of different coverages but won’t be used that way at the next level.  I think he would fit best and provide depth in a Zone heavy scheme that uses a lot of Cover 3 with some Press Man mixed in in short area situations.