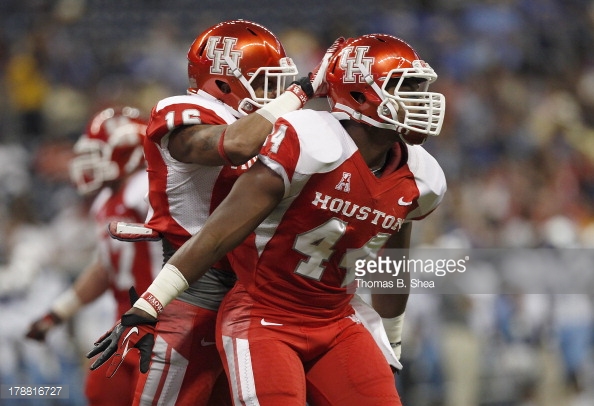 -Originally committed to FCS-level Morgan State, where he led the country in tackles as a true freshman (107)
-Recorded FBS-high 88 solo stops in 2015
-Just a two-year full time starter
-Ran a 4.6 40 and recorded a 36-inch vertical jump

If production alone were the measuring stick for where a guy will go in the draft, Houston’s Elandon Roberts would be near the top of the list due to his exceptional 2015 season as the senior leader of the Houston Cougars’ defense.

Unfortunately for the 5-foot-11 linebacker, Roberts’ FBS-high 88 solo tackles in 2015 won’t be enough on its own to put him into the top tier of inside linebackers in this draft class.

On film, it’s clear how dominant Roberts can be, especially in the American Athletic Conference. Outside of his teammate, cornerback William Jackson III, Roberts was clearly the best player on the field at times throughout the 2015 season as evidenced by his huge numbers he put up.

But outside of the numbers — which are impressive, don’t get me wrong — there were clear limitations to Roberts’ game. For starters, he appears stiff in his knees, as his running style is a bit unorthodox.

That being said, he possesses a great first step, making up for those stiff knees.

On top of stiff knees, Roberts really labors when he has to change directions, which can take him out of plays at times.

Adding to him limitations, Roberts isn’t athletic enough to drop into space in coverage or run with running backs and tight ends in man coverage.

However, Roberts makes up for that with is tremendous nose for the ball and his exceptional straight-line speed and athleticism, allowing him to live at and behind the line of scrimmage as a play-making linebacker.

Plus, his head coach, Tom Herman, called him one of the best leaders he’s ever been around and raved about his work ethic and passion for the game. Sounds a lot like current Pittsburgh Steelers inside linebacker Vince Williams.

Against Memphis, Roberts had a strong game, recording 18 total tackles, one sack and one interception.

He was simply dominant and was around the ball almost every offensive play that the Tigers ran.

Take a look at the closing speed here by Roberts on the run. He’s able to process what is happening in front of him quickly before then planting and exploding forward to make the stop behind the line.

Same thing happens here with Roberts. He’s exceptional coming downhill and knows how to find the best path to the football.

When he gets there he is usually reliable and makes the stop for a limited gain.

His work against Navy’s triple-option offense was impeccable. Rarely was he out of position or trying to do too much outside of his assignment. He was stout in the middle of the defense all day long.

Roberts doesn’t bite on the pitch fake to the right, instead knowing what play is coming, staying square to the line of scrimmage to scrap along before turning the corner quickly to make the stick behind the line.

Outside of being a stout run defender, Roberts showed some burst as a pass rusher, timing out blitzes perfectly, while also showing patience to wait for lanes to open up on delayed blitzes before then exploding through.

Check out that perfectly timed blitz to stop Reynolds on his tracks right after the subtle play-fake.

What I love about this play is that Roberts didn’t show blitz too early, allowing him a free lane into the backfield as the Navy offensive line had no answer for him.

Reynolds is a tough guy to bring down in the pocket, but that’s perfect form from Roberts on the sack. You see the straight-line speed that he has at his disposal as well.

Once again, Roberts has great straight-line speed on the blitz, but you also see the slow change of direction, leading to an extended period to get up to full speed.

I’m not overly concerned about the change of direction issues, but it is something that could certainly be exploited at the next level with misdirection plays and things of that nature.

What really concerns me though are the next two plays, where he struggles to make plays against shifty players that have some speed in space.

In both clips Roberts flows well and finds the ball carrier quickly, but he simply dives at their feet, resulting in missed tackles.

That can’t happen at the next level, especially when Roberts is the lone defender to get to the ball that fast.

Despite being a sure tackler, Roberts left some plays on the field that need to be cleaned up if he wants to establish himself as a possible starter down the line in the NFL.

Overall, Roberts is a guy who should be able to contribute immediately in the NFL as a stout run defender in a 3-4 or 4-3 front where he’s able to stay clean and react quickly to what is happening in front of him.

However, he’ll certainly have to come off the field in obvious passing downs as he just isn’t strong at turning and running in coverage.

If he can work on his coverage skills and improve his ball skills a bit, I see no reason why Roberts can’t be a productive ILB in the NFL for years to come.

He’s a tenacious player that loves to hit and has his teammates follow his lead. I love that in a linebacker.

He might be a bit on the small size, but you can’t measure heart and determination. Roberts has an abundance of both.