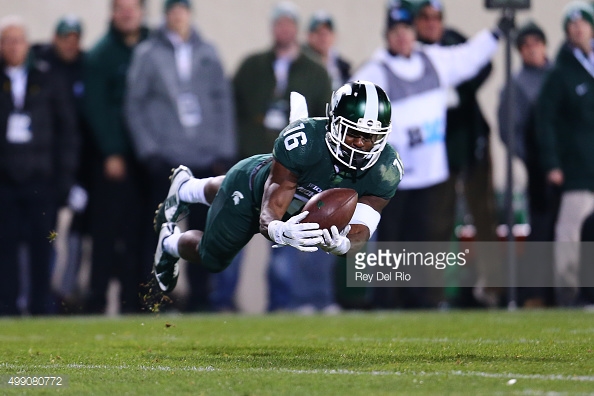 -Great route runner that creates separation with burst in and out of cuts
-Willing to take big hits to make plays and will hang onto the football
-Good body control to contort to make tough catches
-Strong hands that latch onto the football
-Excels at finding open space as a runner
-Full route tree in a pro-style offense at Michigan State
-Versatile receiver who can line up at X, Y or Z
-Willing blocker who works to second level well

-Tends to body catch at times, leading to drops
-Small frame for position at next level
-Not a vertical threat due to limited long speed
-Limited explosion as an athlete
-Just one year of legitimate production
-Needs to be much more creative as a runner after the catch to create plays
-Average height, length and hand size (8 1Ž4 inches) for position

-Named 2015 B1G Ten Receiver of the Year
-Hauled in 85 passes for 1,258 yards and seven touchdowns
-Started 23 of 51 career games in East Lansing
-Finished with 165 career catches for 2,174 yards and 10 touchdowns
-Broke fifth metatarsal on his left foot, which required surgery in April 2015

Based on production alone in 2015, Michigan State’s Aaron Burbridge proved to be one of the top receivers in the country in the Spartans’ pro-style offense.

Featuring outstanding chemistry with Connor Cook, Burbridge went from an underachieving former top recruit through three years in East Lansing to the top receiver in the B1G Ten, completely flipping the script on his career in green and white.

Fortunately for him, the one big year could set himself up nicely at the next level as a receiver who makes the tough catches, moves the chains consistently with his catches and really understands his craft regardless of where he lines up on the field.

Although the senior receiver isn’t an explosive athlete, he has a knack for coming up big in the clutch, which he did with regularity this past season while leading the B1G Ten in all major receiving categories.

The great route running, ability to use positioning to his advantage, strong hands and tremendous body control is all there with Burbridge.

Despite being 6-foot, Burbridge plays through contract very well. In fact, at times it seems like he even relishes it, leading to a step up in his play.

That being said, he can be bumped off his routes near the boundary, getting forced out of bounds.

Granted, both clips above are great plays by the Spartans’ receiver, but he needs to work on not getting bumped out of his route. He’s a savvy route runner that knows how to work open, but against press coverage and corners that like to get into the body, Burbridge could struggle.

In the first clip, Burbridge does a great job of tracking the ball the entire way down the field before making the diving catch. He could have given up on the route once he was bumped out of bounds, but you see the my-ball mentality with him. He works hard to get back inbounds to make the big play down the field.

In the second clip, Burbridge will leave your jaw on the floor.

This might have been his best play of the season, which was filled with great plays. Not only does Burbridge make the play through contact, but also the fact that he’s able to spin out of one hit and make another move while nearly losing his balance is outstanding. Not sure I’ve seen a play like this before.

Despite being a guy that can be forced off of his routes by physical corners, Burbridge’s route running is very good for a college receiver.

In the clip above, Burbridge is very quick and decisive in and out of his cuts, creating ample separation to the sideline, allowing him to go up and get the football with ease.

As you can see in the clip, the Oregon defender gets completely turned around and finds the football too late, giving up the catch to Burbridge along the sideline.

The out-cut at the top of his stem is very impressive, simply because he is so quick to get into and out of it.

Against Rutgers, Burbridge shows his ability to sell double moves very well, creating solid throwing windows for his QB while also turning the defender around.

This is a simple route from Burbridge, but one he has perfected with his head fakes and powerful plant step to sell like he’s going to the post before planting with his inside foot to get back outside for the corner route.

On both clips showcasing his route running, Burbridge makes great catches, displaying his body control and strong hands to make the tough catches outside of his frame.

In this clip against Nebraska, Burbridge gets help on the slant route thanks to a subtle pick by L.J. Shelton, who picks Burbridge’s corner with his own, allowing Burbridge to run free into the middle of the field.

Cook makes a great pass into a developing passing window, but what I really like about this play is the extra gear that Burbridge hits with the football in his hands to destroy the angles of the defenders trying to bring him down.

Running a 4.49 at the Combine shows Burbridge is fast in a straight line, but that extra gear he kicks into here is impressive.

Finally, although Burbridge put up great numbers during his senior season at Michigan State, he left quite a few plays on the field due to some focus drops over the middle of the field.

While this pass from Cook comes in hot, Burbridge has plenty of time to track it into his hands, but he simply drops a would-be touchdown.

I’m not sure if he was worried about taking a big shot from the closing safety or not, but similar plays like this one happened at times throughout the season for Burbridge, ironically, in the middle of the field.

I don’t think it’s an issue with him betting worried about taking shots most of the time, I think it has more to do with focus issues and adjusting to a high number of targets coming his way each and every week.

That being said, it’s certainly something he’ll need to clean up at the next level, which I’m confident he will.

Overall, Burbridge might be too small to play on the outside, but with his savvy route-running skills and his great body control, he could be a serious factor in the slot for a pass-happy team.

Despite having just one real year of high-level productivity, he’s worth taking a shot on based on his overall skillset.