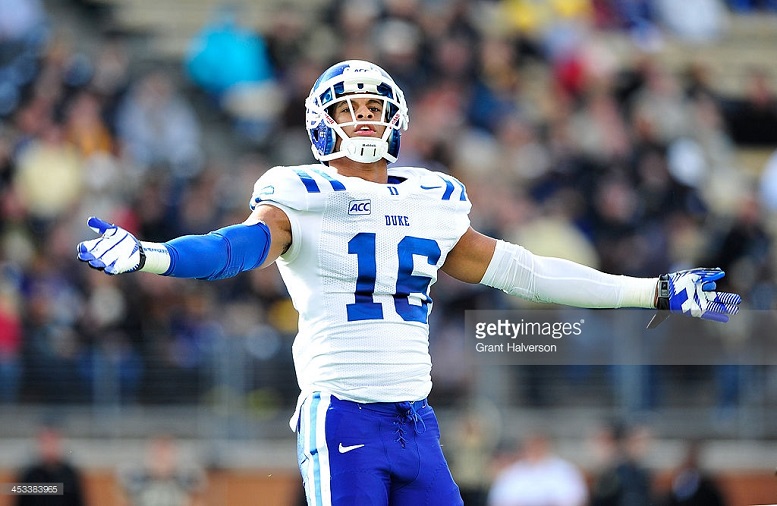 -Instinctive athlete when lined up around the line of scrimmage
-Finds the football very well in the running game
-Physical in-the-box safety that loves contact
-Has a nose for the football, turnover-creating machine
-Excels at read-and-react defense when he keeps everything in front of him
-Impressive closing burst to narrow the gap between him and the ball carrier
-Makes a living hanging around the line of scrimmage
-Disruptive force that shoots gaps well to make big plays behind the line
-Thick frame that is build for rigors of in-the-box safety

-Not overly comfortable in coverage
-Gets lost on routes by getting turned around
-Struggles to get off blocks in space
-Poor technique and instincts in man-to-man coverage, very stiff hips in coverage
-Heavy feet in coverage
-Can get caught flat-footed when trying to use press technique
-Really slow at flipping hips to run with opponent
-Balance and fluidity an issue in coverage
-Limited lateral movement skills, labors to change directions
-Slow to drop into coverage with proper depth

Let’s start out by saying what Jeremy Cash isn’t: a version of Arizona’s Deone Bucannon, who is an inside linebacker for the Cardinals.

Yes, Cash makes big plays on a consistent basis around the line of scrimmage — much like Bucannon did before making the switch to the front seven.

However, Bucannon was a freak athlete who not only had the incredibly muscular frame to hold up in the front seven who also had the game-breaking speed to change the game.

Cash has a thick frame that will allow him to hold up playing on and around the line of scrimmage at the next level, but he doesn’t have game-breaking speed, and — quite frankly — is poor in coverage.

If you want to compare him to anyone in the NFL, compare him to guys like Will Allen, Kam Chancellor and T.J. Ward, who can make plays behind the line of scrimmage, serve as dangerous blitzing options for their respective defensive coordinators, and can drop into zone coverage when needed to.

All are very physical and seek out contact at every possible chance they get. That’s what Jeremy Cash brings to the table.

So, in terms of what he does bring and what he is as a player, let’s take a look at his coverage strengths and weaknesses.

As I mentioned in the ‘bad’ section, Cash really struggles in man coverage.

Take a look at this clip against the Miami Hurricanes in 2014.

At the snap, Cash tries to get his hands on the Miami receiver, but by stopping his feet Cash leaves himself vulnerable to getting beat over the top, which happens here.

Once Cash reaches out to get his hands on the receiver, he tends to let his feet fall flat, which makes it much harder for him to flip his hips and recovery. Although he’s able to use his limited speed to recover on the play, his stiff hips, heavy feet and lack of feel for man coverage really burns him here.

While man coverage is a major issue for Cash, what he really excels at in coverage is a read-and-react style in zone coverage as the Striker safety for the Blue Devils.

When he’s able to sit into a zone and react to what his eyes are seeing in front of him, he’s a force to be reckoned with.

Take a look at this clip from the same game against the Hurricanes in 2014.

At the snap Cash drops a few yards deep just outside of the hashmarks. By sitting down in the zone and keeping things in front of him, Cash is able to react to the pass from Brad Kaaya intended for current Oakland Raiders tight end, Clive Walford.

Although Cash could have gone for the pick here, he nearly splits Walford in half, letting the rest of the Hurricanes know that they better have their heads on a swivel if they’re going to run crossing routes into his area.
There are other limitations to Cash’s coverage skills outside of man coverage.

As you can see, Cash has to work on his zone drops when receivers are behind him. On this particular play, Cash has to get a deeper drop to make for a tougher throw from the quarterback. While he isn’t able to do that here, the biggest concern I have from this play is how slow he is to flip his hips, how he labors through his change of direction, and his lack of balance as he flips his hips.

Cash’s footwork isn’t great in coverage, so if a team is going to invest in him, they have to have a plan from the get-go that doesn’t involve a ton of man coverage or deep zone responsibilities.

Where Cash really excels though is around the line of scrimmage where he is an absolute terror on seemingly every snap. Reminds you of someone doesn’t he?

Take a look at this clip against Georgia Tech this past season.

Coming on the blitz, Cash is able to knife right through the line to make the play on the GT quarterback, forcing the fumble.

While flying through the line, Cash uses his awareness to realize that the quarterback still has the ball, allowing the running back to fly by on the fake.

He’s very instinctive on and around the line of scrimmage where teams have to know where he’s lined up at all times.

Then there is this play from the same game against Georgia Tech.

Look at the way he times the blitz perfectly to blow up the play, forcing yet another fumble. This guy is so instinctive and smart as a football player.

No, I’m not comparing Cash to Troy Polamalu, so please don’t blow up on me in the comments section, but on plays like this Cash shows similar qualities that Polamalu once had.

Outside of a blitzing safety off the edge, Cash loves to take on lead blockers in a unique way in the running game.

This is probably my favorite play from Cash through five games I watched.

This clip is from the 2013 ACC Championship game against the eventual National Champion Florida State Seminoles.

Cash comes off the edge to squeeze down hard against the run. By going low to submarine Nick O’Leary — who currently plays for the Buffalo Bills – Cash is able to blow up the play, allowing his teammates to clean up the mess behind the line of scrimmage.

He also showcased this technique in 2014 against the Miami Hurricanes where he blew up the fullback and flipped Duke Johnson head over heels on the play.

It’s really tough to root out a defender when he goes low like this, which makes it incredibly effective.

While Cash is a terror against the run, there are times in space where he really struggles to get off blocks because he gets caught looking in the backfield.

With 32-inch arms, Cash needs to learn to utilize his length to create extension before shedding the blocker to find the football.

There are times where he simply getting worked over by blockers in space. It’s concerning, but with a little coaching he’ll be just fine. All of the physical and mental tools are there.

Overall, I love Cash’s game. I’m not drafting him to be a coverage-heavy safety. I want to put him in as comfortable of a position as possible, which includes playing him a lot in the box.

If he can serve as an extra body in the box that is strong against the run, blitzes well and has a great nose for the football to create turnovers, I see no reason why we have to label him one way or the other.