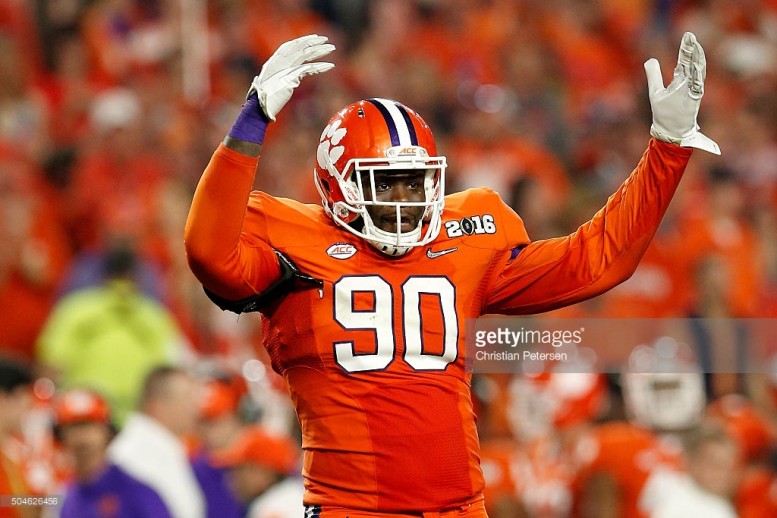 Today, we will have a look at Clemson defensive end Shaq Lawson.

– Large man in a compact frame
– Raw, natural strength
– Agile for his size and uses legs well
– Played down and standing up
– Heavy hands
– Adequate ball awareness and strong against the run
– Reliable tackler
– Was asked to drop a little
– Will play through injuries
– Good character
– Fared well against quality competition

When he gets off the snap on time, Lawson can be a force as an edge rusher when lined up outside the tackle. additionally, he loves to set tackles up for his inside spin move. While he doesn’t get the sack on this particular play, he certainly gets adequate pressure and forces the quarterback out of the pocket away from his side. He really loves this move.

Another clean get-off here followed by another spin inside results in two Notre Dame offensive linemen being forced to tackle him. He can be so disruptive when it comes to that gap.

While he’s a tad late off of the ball on this run play below, Lawson easily controls the tight end with his eyes locked into the backfield. He quickly disengages for one of his many run stops.

Unfortunately when it comes to Lawson, you will see him late off of the snap more times than you would like. 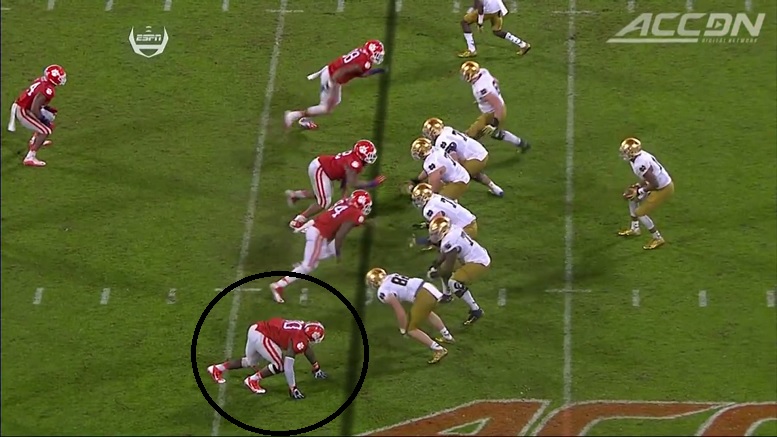 Late off the snap here allows the Alabama right guard enough time to pull and seal Lawson off to the inside. He has to improve on his get-off at the next level.

This time Lawson uses his inside spin move against Florida State to easily register a run stop.

Even though Lawson is standing up inside the tight end on this play, he’s still able to cross the face of his blocker to not only force the ball-carrier back inside, but also get one of his arms in on the tackle. This was a 4th and 1 play that came up short.

Bad MCL and all, Lawson shows some agility here on this play in the National Championship game against Alabama and it results in a sack. He definitely is light on his feet for a player with his size and build when coming forward. However, he’s not as graceful when moving backwards off the line.

Summary: Lawson was a fun player to watch and is the ultimate tweener, in my opinion. In other words, every team will take a look at him because of his size, abilities and production at the college level. Some will view him as a base 4-3 defensive end, while a few might see if he can add more weight and play inside as 3-tech defensive tackle.

For teams who might consider Lawson to be a 3-4 outside linebacker, they might have to see if he could potentially drop a little weight while still maintaining his strength. With that said, Pernell McPhee, who has similar measurables as Lawson, has shown that he can play the position at the NFL level. However, using Lawson to drop into coverage would certainly be a win for whatever offense he faces. As far as Lawson possibly being a 3-4 defensive end, his lack of length might hurt him there and once again, he might need to add some weight.

Lawson is very disruptive and powerful player against the run. Against the pass, however, while productive, it takes time for him in some instances to win the edge when asked to do so and it doesn’t help that he’s known to be late off of the snap on a consistent basis. While Lawson does exhibit a better than average arsenal of counter moves as a pass rusher, along with him being a good hand fighter, he relies on his inside spin move a bit too much for my liking. Also, when asked to stunt inside, it takes him a while to get there as he has wasted motion.

All and all, Lawson is disruptive player and his success against better than average left tackles bodes well for his future success. With that said, his success in the NFL might rely totally on the position he’s asked to play and the scheme he’s asked to play in. While I don’t view Lawson as a top 15 player in this year’s draft, he’s definitely a top 25 player, in my opinion.

As far as the Steelers go, I definitely think they will show some interest in Lawson as potentially an outside linebacker who can also probably stay on the field as an interior pass rusher in sub packages because of his uniqueness. in other words, an elephant kind of player.