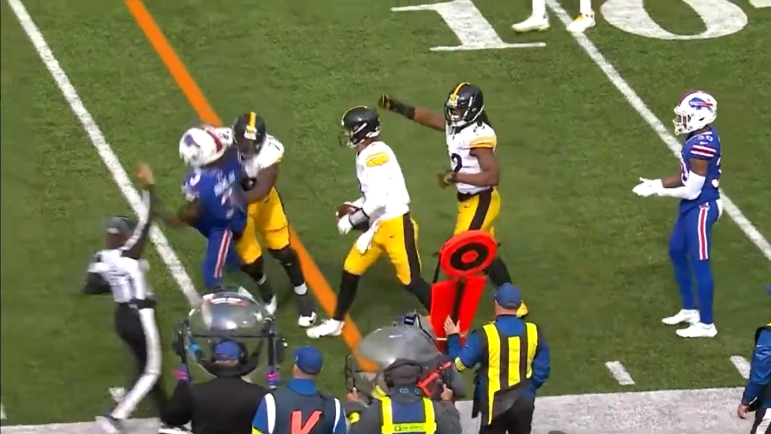 The two moments from Sunday’s game against the Buffalo Bills that have been discussed the most were the two times that Pittsburgh Steelers quarterback Kenny Pickett was hit by a defender in ways that many believed should have drawn flags, or which were at least against some unspoken rules.

More specifically, it was how the team responded to them. Near the end of the game, it was Pickett himself standing his ground, shoving linebacker Shaq Lawson after the defender took him down at the knee on a 4th-and-forever throwaway. Earlier in the game, after safety Damar Hamlin laid a hard hit into Pickett going into a slide, it was guard James Daniels who came in and lowered the boom in his quarterback’s defense. And he’s had his team’s full backing for it, especially from his position group.

“As the offensive line, that’s what we’re gonna do, we’re gonna protect our guys, so a lot of respect for James for going over there”, said center Mason Cole via the team’s website. “James knows that we have his back in those tough situations. We were all trying to rally over there and clear up the situation and make sure James was all good and Kenny was all good. Heat of the moment, it’s a tough deal, but we’re gonna do whatever we can to protect our guys”.

It was certainly a surprise that no flag was thrown for the hit, as Pickett was already sliding before contact was made. It’s possible that Hamlin, his former college teammate, had lowered his head early and thus didn’t see that he was sliding, but that won’t avoid a flag, nor should it allow him to escape a fine later in the week.

It is a topic that came up in head coach Mike Tomlin’s postgame press conference. While he took no issue with Hamlin himself, he grilled the officials for not throwing the flag. “I had a problem with the fact that it wasn’t officiated in the way that I anticipated it being officiated”, he said.

Amusingly, he was asked as a follow-up if he was okay with Daniels’ response against Hamlin following the hit, which prompted one of Tomlin’s shortest (in temper) responses in a while. “I’m not getting into all that”, he said. “Ask a real question”.

In other words, of course he’s more than fine with his free agent right guard going to bat for his new first-round franchise quarterback. Sometimes reporters feel obliged to ask the obvious questions so that they can have a reaction to the topic to write around, but a coach can’t be faulted for not being in the mood to give the obvious answer, especially when it’s shaky ground to do so.

Any offensive lineman worth his salt should do what Daniels did, or at least support it. Yes, it drew him a penalty for unsportsmanlike conduct, but you simply cannot let your quarterback take a shot like that without showing up. It’s job one.