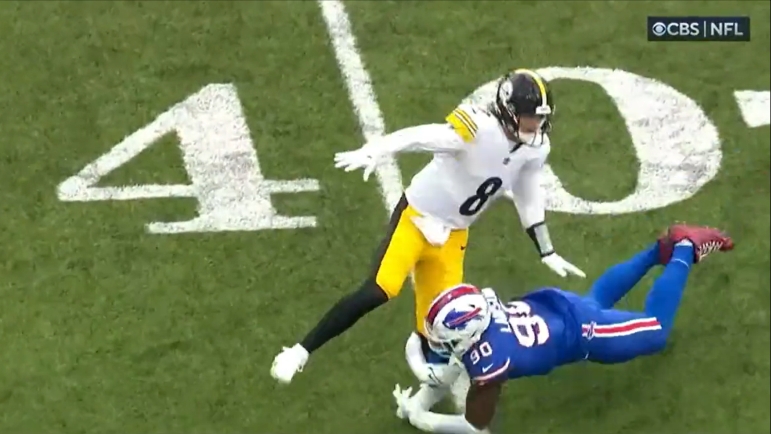 The Kenny Pickett era in Pittsburgh officially began today with the rookie quarterback making his first career start, and it was certainly one to forget. Heading up to Buffalo, he and Mike Tomlin’s team took a thrashing from the AFC favorites to the tune of 38-3, the worst loss in decades for the franchise.

While Pickett overall played a decent game, certainly with some notable highs, he was not without his flaws. His reaction to a defender hitting him low after a throw at the end of the game, however, probably wasn’t one of them.

After tossing away a pass under pressure on 4th and 14 with about a minute to play, Bills defender Shaq Lawson continued to go low on the quarterback, bringing him down at the knee. Pickett did not take kindly to that, shoving him while both were still on their knees, sparking a shoving match between the two sides.

“I’ve got to watch it again, but in my opinion, I felt like he went after my knee after I threw it”, the rookie said of his emotions in that moment after the game, via the team’s YouTube. “That’s it. Tempers flare. I don’t care, I’m gonna keep playing ‘til the last play of the game, and that was it. So, all good with me”.

Right tackle Chukwuma Okorafor immediately jumped in to back up his quarterback after Pickett engaged with Lawson. Moments later, members of both teams gathered in mass that was eventually dispersed, but not before a Bills defender was ejected.

It wasn’t the only questionable shot that Pickett took during the game. Earlier on a slide, he took a hard shot from former Pittsburgh teammate Damar Hamlin, which the officials in-game determined was clean. Instead, right guard James Daniels was flagged for unsportsmanlike conduct for quickly coming in and shoving Hamlin to defend his quarterback.

“I didn’t get a chance to see that. Listen, we all care for each other”, Pickett said when asked about his feelings about Daniels coming in and having his back. “We all want to win. We’ve just got to focus on playing better, honestly”.

Of course the priority from the team perspective has to be on getting better. But the rookie quarterback could also use some more protection from the league. These are shots that we know the NFL doesn’t want to see their quarterbacks taking. Neither Lawson nor Hamlin were even flagged. Instead, Pickett and Daniels were.