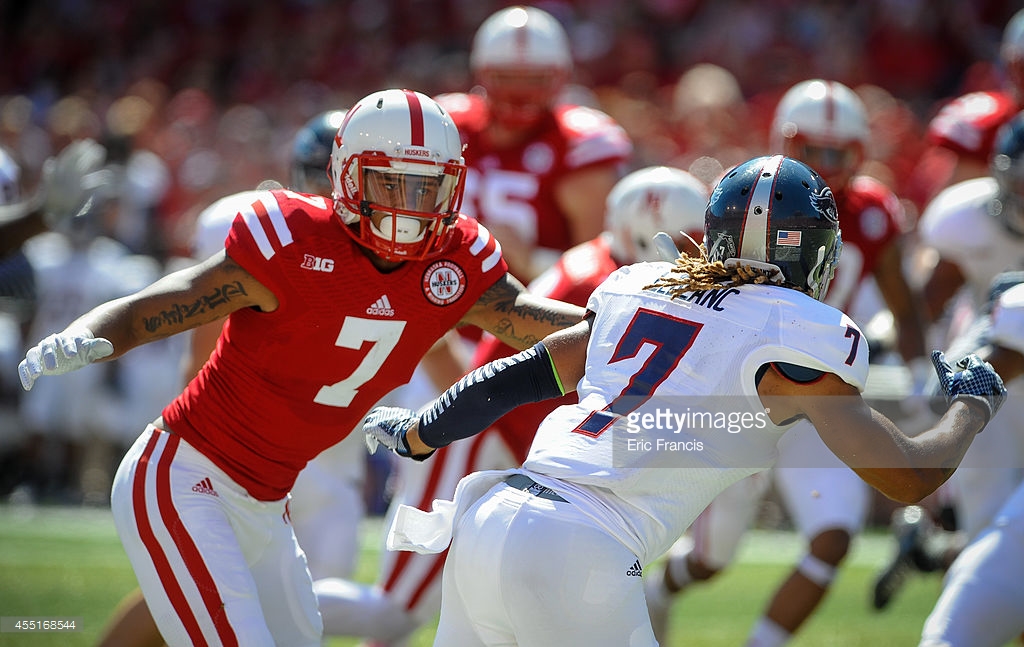 – Trails well across formation in man coverage
– Good tackler in space
– Smooth, fluid hips
– Adjusts to flight of ball
– Does not shy from contact as a corner
– Good bend and athletic ability
– Has played man and cover 3, mostly as boundary corner, played both sides.
– Smart player in understanding of leverage and forcing players against the run
– High-motor CB
– Experience returning kicks and punts
– Good change of direction

– Does not possess top-end speed, will time slow
– Small for a corner (listed at 5-11 on college page), slot-limited in NFL?
– Swallowed up against larger receivers blocking
– Does not have the power or mass to make tackles in open space by himself. Run over or dragged consistently
– Questionable balance
– Tends to hop in his backpedal, needs to get lower, sink his hips and smooth it out

– Leadership obvious on tape of defense, helping make coverage calls
– Averaged 22.4 yards on his 30 college kick returns, 4.8 on his 8 punt returns.
– Named 2015 Team Defensive MVP
– Named Second-Team All Conference-USA in 2015
– Combined for 17 PDs in the last two seasons
– Received first-team All-Area honors as junior and senior at Glades Central High School
– Given the “Hardest Hit” of the year award in Palm Beach County
– Has tallied 85 solo tackles over the last two years, plus 29 assists

Here, Leblanc is the boundary corner and has zone responsibilities deep in the Cover 3 playcall. As he bails deep, note how he keeps his eyes on QB Treon Harris the entire time. When the pass comes to TE Jake McGee, Leblanc is already coming up to make the stop. He breaks down in space and tackles through McGee for a very good open-field stop. I love this play from Leblanc because it shows his vision and smarts to come off the deep route when the ball is delivered underneath. It’s an aggressive play in its own right to make the stop, and very good tackling form too.

Leblanc is lined up once more as the boundary corner. He starts with inside leverage on the receiver, and then jumps even more inside right at the snap. However, he keeps his eyes on the receiver and flips his hips suddenly to run deep with him. Leblanc doesn’t have the speed to hang with him, and he’s helped by a bad ball from the QB. He attacks the receiver aggressively to force an incomplete pass.

I like the hip fluidity and contested catch. I don’t like how he lets the receiver get off the line. You need to either re-route him outside with inside leverage, or play inside and not get sucked further in, particularly with bad deep speed. This is a very mixed play for Leblanc.

This play actually sums up Leblanc very well as a prospect. On full display are his smooth hips, lack of top-end speed and fire at the catch point. It’s all on display here.

For as well as Leblanc plays the pass, his size makes him a liability against the run. Here, he forces the RB to bang inside simply by taking away the sideline from him. He flashes very good athletic ability to be able to recover from a bad initial position just to get hands on the RB to attempt a tackle. However, the RB shows some excellent leg drive and Leblanc gets no force into the tackle. He is dragged to the end zone for a TD.

Where Leblanc also adds some value is special teams as a returner. On this kick return, he shows good vision and agility. As holes open, he gets to them with a little extra burst. Impressive balance to stay on his feet after the friendly fire hit and a little extra leg-churning to keep moving. Positional versatility never hurts a draft stock, and Leblanc’s ability to return both kicks and punts will certainly improve his chances of hearing his name called on draft day.

Although his college teammate D’Joun Smith stole the headlines coming out of Florida Atlantic last year and going 65th overall to the Indianapolis Colts, there’s no doubt that Cre’von Leblanc was his college equal in field ability. Both were top-notch coverage corners at Conference USA’s Florida Atlantic, with Smith actually targeted more often than Leblanc from the 2014 tape I saw of the duo. Unfortunately, Smith was injured early in his rookie season and spent most of the year on IR/DR, only returning in mid-November. He played in four games, predominantly on special teams, before being placed on injured reserve again, ending his season.

However, Smith clocked a 4.45 40 yard dash at the combine and despite having tiny hands, has arms almost two inches longer than Leblanc. His strength measurements are also more impressive, and considering Leblanc did not receive a combine invite, that’s more likely to stand.

Cre’von Leblanc was an excellent college corner, but like many college players, his NFL translation will be trickier. My first exposure to him was the Shrine Game, where Illinois WR Geronimo Allison went right across his face and made Leblanc look stiff in the hips. On film, he looks a lot more fluid than that, but there are definitely other limiting factors.

The sad reality is, his size limits him to the slot in all likelihood. Despite that, although I love his tackling skillset, he just gets blown up and run over, which is not what you want to see from a slot corner, who needs to be able to tackle consistently well in space. His lack of speed also benefits him in a move to the slot, where he is unlikely to be challenged deep without help over the top.

NFL defensive coaches will fall in love with his grittiness and scrappiness. He is aggressive at the catch point and plays the ball very well for his size. However, he’s not a great athlete in open field. He succeeds best at athletic ability in a phone booth, which is efficacious for a linebacker or defensive lineman, not a cornerback. I like his added return ability, but he’ll need some development to be a starting-caliber corner. His ceiling isn’t very high, but he’ll stick on an NFL roster as a special teamer and depth cornerback. I wouldn’t be surprised to see an NFL take him as part of a CB stack pair of picks with an earlier-round physical guy.