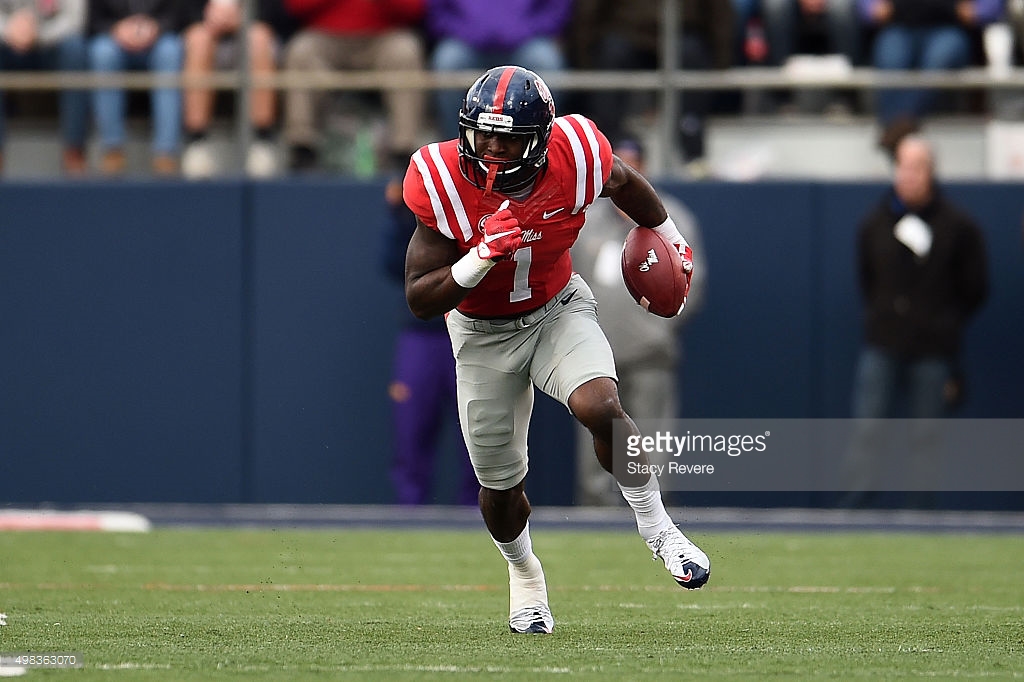 #1 – Laquon Treadwell/WR Ole Miss: 6-2, 210
The Good
– Adequate long-distance speed, despite long strider. He’ll probably run a high 4.40s 40 yard dash.
– Shows a lot of fire as a blocker at times, blocks through the whistle
– Full route tree
– Both a downfield threat and able to create separation with his routes. Even runs decent whip route, surprising for a big receiver
– Comes back and attacks ball
– Tracks the ball well, makes difficult catches with ball arcing over his shoulder
– Excellent one-handed catch versus Oklahoma State for TD
– Really impressive throw on double-pass play in 2015 Sugar Bowl
– Shifty with good footwork off the line
– Often looking for someone to hit – I saw two blindside pancake blocks from him downfield
– Very good YAC – solid stiff-arm and surprisingly good cuts in open field. Uses body to fight for yardage as well
– Nice concentration to catch batted-up ball
– Good hands and large catch radius
The Bad
– Leans too much as a blocker, means his vision drops and defenders slip by
– Fails to engage in blocks at times, should be blocking downfield, far too complacent with the play coming towards him. Just inconsistent overall.
– Takes a moment to tense up before getting off the line, needs to explode off in one motion
– His eyes betray routes at times, needs to get his head pointed in his own direction instead of where he’s headed (eyes indicate the post when he should be setting up the vertical route before stemming inside)
– Fails to sit down on crossers against zone, needs better awareness to find the space
– He’s not a freak athlete, only above average

– Will turn 21 in June
– Attempted 3 passes his senior year. Completed all three for 134 yards and a TD
– Broke fibula and dislocated ankle on same play in 2014 Auburn game
– Senior year of high school: combined 1,681 yards from scrimmage and 23 touchdowns, with 56 tackles and 6 INTs defensively.
– Caught a pass in all 34 college games he played.
– Declared after his junior year.
Tape Breakdown
It’s pretty simple: Treadwell is an extremely high-ranked player for good reason. While the NFL Comeback Player of the Year award is still up for discussion, if there was a college equivalent, it should handily be awarded to Treadwell. After breaking his fibula and dislocating his ankle inside the one yard line for the go-ahead score in a crucial divisional matchup against #3 Auburn in 2014, Treadwell returned stronger than ever for his junior season. His 1,153 yards and 11 TDs both led the SEC, which he produced on 82 catches.
A five-star recruit out of high school, Treadwell dominated the field on both sides of the ball. When he joined Ole Miss at the college ranks, it was more of the same at the receiver position. However, despite his prodigious physical talents, Treadwell is mystifying at times as a blocker. It’s not that he can’t block, it’s that he’s inconsistent about when he does it.

Here, in his 2015 Texas A&M game, he completely fails to engage on a block. His miss allows the CB to tackle the runner, a play which he failed to make off the line. However, the inverse is also true.

This is from the same game, mind you, so it’s not as if he’s been operating under a different gameplan. Treadwell blocks his CB clean into the end zone and out of frame. If a coach can harness his raw blocking talent and focus it, Treadwell could be a monster blocker – he’ll just need to do it consistently at the next level.

For a guy who’s going to get labeled a “big man” or “body” receiver, Treadwell relies on more than just his physical stature to get off the line. Although he isn’t targeted on this route, check out his excellent footwork with a jab step outside to cause the corner to hesitate for a moment before exploding back inside. He seems to throttle down a little early in the route, which is an annoying pattern I noticed on a couple of his plays; I’d much rather see him close the play out strong downfield.

What it comes down to is, will Treadwell make contested catches? This about sums it up. An over-the-shoulder catch with a defender draped on his back. You want my-ball mentality? Here’s another example.

Treadwell epitomizes the sought-after ability of going up and attacking the ball, even if that means coming back to it and snatching it out of a defender’s hands. It’s a pretty serious knock on any NFL player to call them “soft,” but Treadwell plays hard for the ball no matter where it’s thrown.
Summary:
The NFL has shown an interesting trend in recent years of expending high picks on big-bodied receivers with hands issues (Kelvin Benjamin, Devin Funchess and Sammie Coates being notable examples). De’Runnya Wilson of Mississippi State is another one this year who fits that mold.
I had qualms about each of those players that I just don’t have with Treadwell. For one, he uses his body far better than any of them. Treadwell blocking, when he’s “on,” is a force to be reckoned with. He’s chippy, attacking, and doesn’t hesitate to block after the whistle has blown. All too often, bigger receivers rely on their frame to shield defensive backs from the ballcarrier. Treadwell uses that frame to bully CBs downfield. Secondly, his ball tracking skills and hands are far more advanced than any of them. He couples an excellent catch radius with good grip to make the tricky catches look easy.
A lot of analysts have knocked Treadwell for the fact he won’t time well at the combine and that he isn’t an elite athlete. While that’s true, he doesn’t need to be Odell Beckham Jr. to have a major NFL impact. Treadwell’s ball skills and physicality will translate, and although he won’t run away from NFL defensive backs, I doubt he’ll hesitate to run through them.
Treadwell does struggle to recognize coverages at times. Although he easily creates space with his frame and catch radius, he also shows a minor lack of football IQ at times, when he could easily sit in the soft spot in a zone. It’s a concern, but one he’ll need to work on with more live-fire reps.
Although the Steelers don’t have any need for Treadwell, it’s unlikely anyway he falls out of the top half of the first round. Pure blue chip talent like Treadwell doesn’t come along frequently. I wouldn’t be surprised if a team like the Chargers takes a long look at him in the top three depending on how the board falls, considering they lost to retirement.
Projection: 1st Round
Games Watched: at Florida, at Auburn, vs. Oklahoma State (Sugar Bowl), vs.  Texas A&M (all 2015)
Florida:
https://youtu.be/FCT-_OILn6U
Auburn:
https://youtu.be/nb3RgSad1_g
Oklahoma State:
https://youtu.be/-CB-BdQwKNg
Texas A&M:
https://youtu.be/WlY-yJ4XMhg