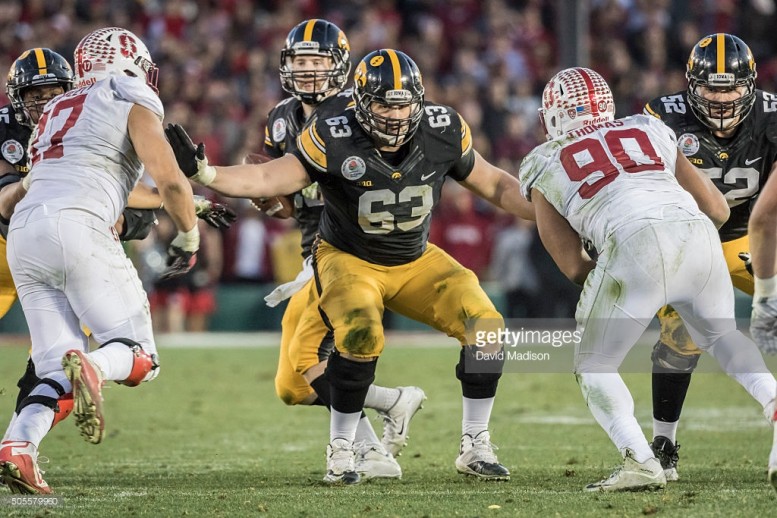 #63 – Austin Blythe/C Iowa: 6022, 291
The Good
– Moves men in the run game when he gets good movement off the ball
– Good use of arms to pick up blitzes
– Nice anchor/shove to pick up a blitzing LB
– Has good vision and head on a swivel – just needs to engage through plays
– When he gets a good engage, blocks his man through the sideline and washes really effectively
– Grabs and anchors when pass blocking
– Drives his legs through contact
– In goal-to-go scenarios, fires low off the ball so inconstently
The Bad
– Blown up pass blocking by weight/power – needs to set his feet, use his base
– Needs to help his guards out if free
– Loses his hip integrity
– Doesn’t hustle downfield before whistle. Sometimes gives up pass blocking on an active play
– Needs to fire his hands in faster
– Short arms
Bio
– Multi-year name on the Leadership Group at Iowa
– Born 6/16/92, will be a 24-year-old rookie
– Started 49 games at Iowa – center (33), right guard (10), left guard (6)
– Has experience across the line
– Awards every year: First-Team All-American (Scout.com); Sophomore, Honorable Mention All-Big Ten (coaches and media); Junior, Second Team All-Big Ten (coaches), Honorable Mention All-Big Ten (media)
– HS letters in Track (4), Wrestling (4), Football (3)
– Holds Iowa state record for career wrestling pins (143)
Tape Breakdown

Here, Blythe is matched up one-on-one with the 0 tech (6-3, 285 DL Mark Scarpinato). Scarpinato gets his hands up and engages with Blythe first; first of all the defensive linemen, in fact. Blythe is quite literally late to the punch. Scarpinato tries to power himself to his left, Blythe’s right. However, watch Blythe drop his anchor and absolutely stonewall the move to protect the front of the pocket for C.J. Beathard after getting walked back a couple of steps (and dealing with an un-called hands to the face penalty). Really impressive power from an undersized guy who has to handle a great get-off here.

Undersized offensive linemen need to show they can do two things: handle power and be able to move in space. We just saw Blythe flash the former. Now, he shows the latter. The left side of the defensive line runs a perfect T-E stunt, leaving the LDE crashing down on Blythe. Blythe, who saw the LDT twisting outside, frees himself and comes clean in space. The DE is lacking much burst/power, but Blythe did a good job to recognize the oncoming twist rush and free himself in space for it.

Blythe has a concerningly slow get off. Here, it costs him. The nose tackle Tyrique Jarrett (all 6-3, 335 lbs of him) fires low and into Blythe’s body, shooting up. He just about bends Blythe in half to make the tackle. Blythe needs to get out of his stance quicker or he gets overwhelmed in the run game, particularly here where it should be an easy punch-in on the goal line.

Although he’s undersized and should theoretically play better in space, Blythe is a mystery at the second level, at times. He has the WILB here in space downhill. Blythe needs to fire his hands inside and blow up the LB. Instead, the ‘backer shifts by him to make the stop. This is a play where Blythe needs to engage and overpower the LB at the second level, a play he should easily be able to make.

Does this look familiar? Same blocking call for the line and the same matchup against LB Riley Bullough in space. This time, however, Blythe closes quicker, shoots his hands and drives through contact. He runs Bullough out of the play this time, because his technique is that much better.
Summary:
Blythe is an interesting, enigmatic player. On one hand, you have a four-year starter with experience across the offensive line. On the other hand, you have an offensive lineman who can struggle sometimes to recognize plays developing. In space, he looks stiff and uncomfortable. Blythe has his head on a swivel, which is excellent – it shows in his patience and arm-extension in the center. However, sometimes he just fails to engage with anybody. An offensive lineman needs to block someone on any given play, which Blythe just fails to do at times.
Blythe is no great shakes as a handfighter. In fact, his main method of pass blocking is to lock on to the defender and drop an anchor. His short arms (measured at 30 1/4 at the Senior Bowl) were the shortest among all linemen in Mobile. As such, he really needs to get off the ball faster than he does to make first contact. He can’t let defenders attack him because their arms can pin him and walk him backwards.
As an undersized guy, he also needs to show better athleticism in space. He’s just an average athlete and probably underpowered in upper body strength. However, his anchor is extremely impressive when he gets room to drop it, and he will keep the front of a pocket clean. Although the Big Ten is famed for their “big nasty” linemen, Blythe plays a little less chippy than one would imagine. My personal preference is to see some fire from offensive linemen, particularly interior guys, which is something Blythe lacks.
Blythe probably projects best in the NFL as a zone-blocking interior offensive lineman, or a man-blocking LG with some development and weight put on. He needs sand in his pants right off the bat to help him stand up to NFL defensive linemen. Honestly, I’d feel more comfortable with him at a guard position so he doesn’t have to worry about snapping the ball and can instead get into his set. However, I really like his wrestling background and think that upside will turn him into a late-round pick. He may need a practice squad year, but he has the frame to add more weight and develop. In the pulling scheme the Steelers use, he’d need some time to adjust, but has good traits to transition. Probably not an immediate impact player.

Games Watched: vs. Pittsburgh, vs. Michigan State, at Wisconsin