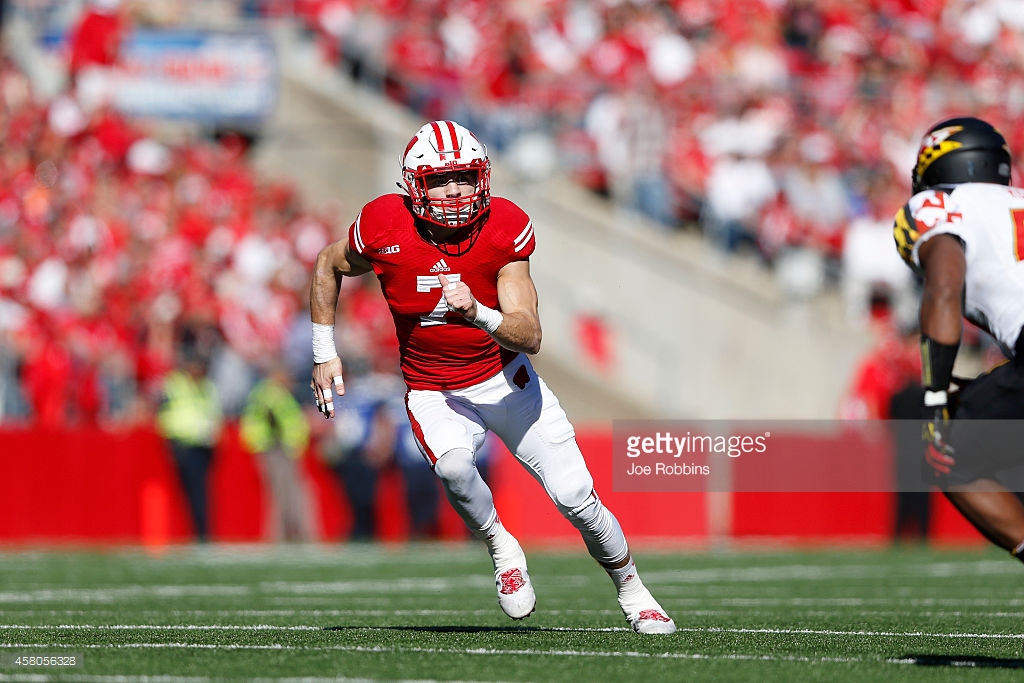 As we delve into the Pittsburgh Steelers offseason, our attention has now shifted to the 2016 NFL Draft as it relates to the prospects. From now until the draft takes place, we hope to profile as many draft prospects as we possibly can for you. Most of these player profiles will be centered around prospects the Steelers are likely to have interest in.
<
A breakdown of Wisconsin safety Michael Caputo

– Has played box, slot, C2 high, upman against stacks, boundary corner
– Good enough vision to track H-back running flat opposite route behind OL
– Not afraid to come in and get his nose dirty
– Good click and close, short area speed
– Comes up strongly, plays like a bull across the middle
– Hips look like cornerback hips in coverage
– Great speed in open field
– Excellent vision and play recognition
– Has the deep speed to at least stay reasonably in step on WRs in coverage – won’t get burned, at least
The Bad
– Tends to drop his head and lunge blindly when tackling
– Takes a moment to re-start from a dead stop
– Jogs plays from the backside at times
– Overpursues outside on angles from FS against run
– Hips look stiff against the run in crowded spaces
– Throws shoulder at times tackling, tackles ankles at others. Inconsistent
– Gets bodied by WRs by not setting his feet

– 40 starts at Wisconsin
– Junior year of high school, played two ways at RB and LB. Had 360 carries for 2,611 yards and 34 TDs, added 89.5 tackles on defense
– Rushed 5 times for 40 yards and 2 TDs in first quarter of first game of senior year before suffering season-ending injury
– Pittsburgh-area native
– Special Olympics basketball coach and JROTC Marine
– 2014 Second-Team All-America (FWAA)
– His 106 tackles in 2014 were 9th in the Big 10

Just before the snap, Caputo sneaks down into the box from deep to play strong safety. He immediately controls his hips and plays the run. Notice how he doesn’t flip his body to run the play down head-on. Instead, he half-shuffles with his hips mostly parallel to the line of scrimmage. This is really quite polished technique for a safety that helps to eliminate counter/misdirection runs biting a defense and is very noteworthy.
Also impressive is Caputo keeping his eyes on the ballcarrier the whole time. He keeps himself clean in the wash and upright while trying to get to the running back the whole time.

Here, Caputo is aligned as the playside free safety at the hashmarks at the 40 yard line. It looks like he’s coming up to an underneath zone anyway, but take note of his vision again. He slips a block by #17 WR Jacob Hillyer and closes quickly through the wash. He has a really ugly ankle tackle attempt on Jordan Canzeri, but his instincts and play recognition to get him there are excellent.

Another bad tackle attempt for Caputo, who doesn’t enter the screen until the runner gets to the second screen. He again drops his vision and attempts an ankle tackle on FB Andy Janovich. This is a bad habit an NFL coach will have to invest some time in fixing, but it was key here. On a 3rd and 2, he allows the fullback to easily break a poor tackle for a go-ahead score. As the free safety here, he has to be responsible for keeping the defensive backfield protected and make the tackle.

Caputo comes into the box again pre-snap. His responsibility is the FB in the flat. As soon as he recognizes that’s the target of the play on this 3rd and 2, he sells out and charges downfield. Ultimately, he drops his head (sound familiar?) but does a great job driving through the player to hold the line and keep him short of the first down.

I also really like the edge that Caputo brings. If you want a guy who plays through the whistle, you’ve got one right here. He’s not afraid of getting scrappy in the pile to ensure a stop is made. This is the kind of attitude that coaches and scouts love to see on tape, because it comes across in the way players hold themselves on the field.

Although Caputo (wearing #42 here) doesn’t normally flash his play recognition skills in the passing game, he does on this snap from the East/West Shrine Game. He reads the QB’s eyes (college teammate Joel Stave) and breaks to the ball. Great play by Caputo.
Summary: I was at the 2016 East/West Shrine Game just a few weeks ago. It was there that this young safety from Wisconsin caught my eye. Although I was familiar with the name going into the game, I hadn’t had a chance to study him as a prospect. I only knew him as the guy who had an awful concussion against Alabama that caused him to attempt to line up on the wrong side of the ball. After a dominant defensive performance including two interceptions and a Defensive Player of the Game nod, I knew I had to do some digging on Caputo.
If my calculations are correct (since updated figures have not yet been provided), Caputo started 40 games in his career at Wisconsin. That much college starting experience is rare, and it shows in the way Caputo plays the game. His play diagnosing is quick and accurate. He knows where he needs to be, and his angles are usually excellent.
Caputo is always around the ball, evidenced by his 171 tackles (100 solo) over the last two seasons: an impressive quality in a safety. However, his tackling technique is extremely limited at times. There are players who dive for ankle tackles, and then there are players who drop their heads (thus being unable to see what they’re aiming at) and dive for ankle tackles. Caputo is the latter. In open field one-on-one attempting to stop a ball carrier, he is a technical mess. But give him a force responsibility or a crowded box, and he works his way to the ball carrier with veteran savvy.
Although he wasn’t often asked to play deep in college, he has flashed potential of maturing into that role in the NFL. However, he fits far better as a strong safety. His physicality and hip discipline are reminiscent of linebacker qualities, but far more intriguing was his use underneath at Wisconsin. The Badgers usually had converted quarterback Tanner McEvoy roaming the deep field (an intriguing pro prospect himself at 6-6 and 231 with athletic ability and range) with Caputo playing the box. From there, Caputo was used everywhere from LB to slot corner to boundary, including covering receivers such as Geronimo Allison of Illinois, who jumped out at the Shrine Game. The fact that Caputo’s coverage was trusted to match up with those players means good things for his pro development.
I see Caputo as being a very good matchup coverage safety and spot starter at strong safety to begin, but who I think can develop into a fine SS. I don’t think he has the range to succeed long-term at free safety, nor the athleticism to make a big impact in the league, but could carve out a niche at strong safety. He’s a smart player with translatable physical skills, if not the athletic traits to match.
Projection: Fourth Round

Games Watched: vs. Alabama, vs. Iowa, at Nebraska, at Illinois