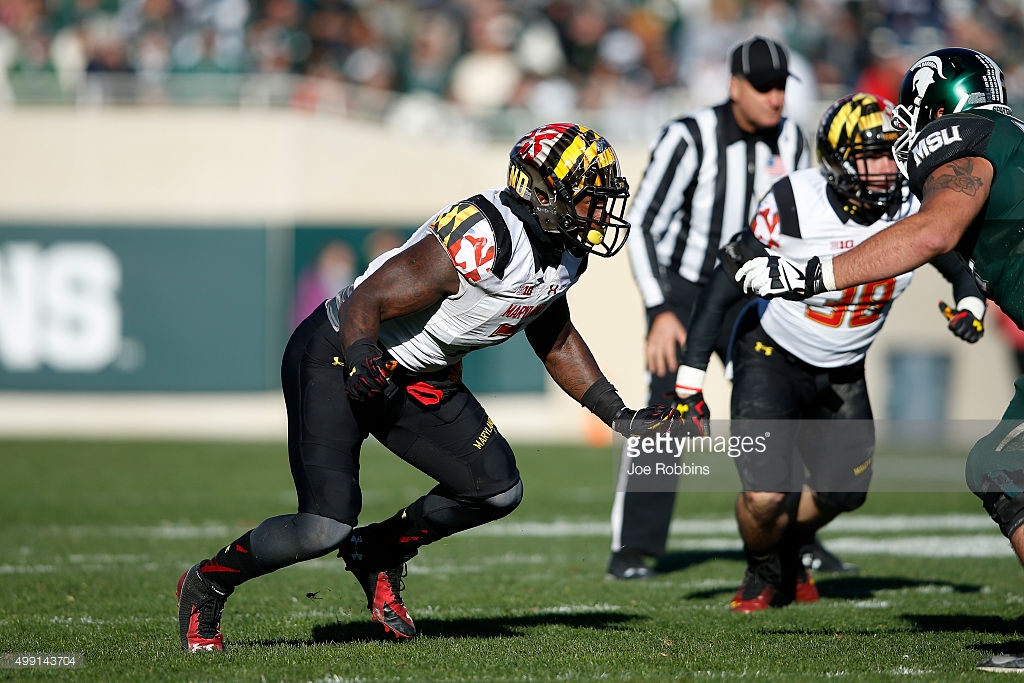 – Good burst in space to close to LOS as spy
– Has good power with one arm, needs to use both
– Flexible hips and ankles, able to bend the edge
– Consistently high motor on pass downs
– Great hip discipline as edge defender
– Stood up in the A gap as blitzer at times
– Full toolbox: includes bend, bullrush, swim, spin. Able to transition from one to the other in the middle of a play if not finding success
– Active handfighter; violent, disruptive hand disengage
– Able to elevate and bat down balls

– Bad tackling angles from off the ball
– Consistently slow out of his stance, limited get-off
– Not tight enough on twist stunts, too much wasted movement
– Lacking in vision and motor when blocked against the run
– Fails “pass rush with a plan” despite full toolbox, sometimes know where he wants to direct OL
– Has difficulty moving good anchors
– Overextends his base taking on the run. Back feet too far behind him
– Shut down against Taylor Decker of Ohio State (was routinely chipped or double-teamed)

– Declared as a junior, two-year starter.
– Chose Maryland over offers from South Carolina, Florida State and West Virginia (Washington, D.C. area native and decided to stay home)
– Set Maryland single-season sack record at 13.5 in 2015, T-4th in career sacks
– Has been invited to the NFL Combine
– Started 23 of the last 24 games for the Terrapins
– First-team All-Big Ten in 2015, honorable mention All-Big Ten in 2014

Here, Ngakoue gets off the snap a little slow, which is pretty typical for him. However, it’s not a major negative on this play because his job is to draw the attention of the RT inside as he slants because there’s a corner blitz coming outside of him. He’s supposed to drag the tackle inside with his rush and create space for the corner (Sean Davis, a legitimate prospect in his own right).

RT Mak Djulbegovic is 6-5, and he uses his length well in the snaps I saw of him. Here, he sets too wide to handle the stunt. As Ngakoue comes across his face, he adjusts sidewise. Note Ngakoue able to somewhat actually bend the end going to the interior. Despite just using his shoulder, he actually generates some power and moves Djulbegovic inside, doing his job to open up space for the corner.

Although this doesn’t seem like much of a play from Ngakoue, it actually shows his athletic ability, smart play and power. On a side note, we will never again see two players matched up one-on-one with names as great as Mak Djulbegovic and Yannick Ngakoue.

Just kidding, as we see another Djulbegovic-Ngakoue rep. Ngakoue is again slowest off the snap of the defensive linemen. He immediately threatens the outside shoulder of Djulbegovic and gets him on skates before fighting across inside for the sack. Really impressive power and closing by Ngakoue despite a bad get-off.

My experience has been that fundamentals translate far better to the NFL in immediate impact than sheer athleticism. Here, Ngakoue shows off his hip discipline, particularly important against a read-option run to his side. Ngakoue is left alone in space against five South Florida players (QB, 3 RBs, pulling guard). Instead of playing overwhelmed or committing, he does exactly as he’s taught to do on the edge – keep his hips square to the line and keep penetrating. The pulling guard stays inside of him, and Ngakoue whips around in a phone booth to record the tackle on the QB.

At times, Ngakoue flashes perfect fundamentals. At times, they’re wildly off. Here, Ngakoue takes on the block and immediately spreads his base far too wide, allowing the tackle to push him downfield. He tries to control the lineman inside (using good vision to see the QB’s aim), but when the ball carrier bounces outside he gets lost. He needs to keep his feet with him and not allow himself to get washed out of the play.

Here, Ngakoue baits the tackle with a sort of “mush rush” – a contain rush where he threatens the tackle’s outside shoulder and maintains his field position. Instead, he hesitates and hits the gas, swims over the lunging tackle and closes in space to disrupt the pass. Very impressive to set the tackle up and have the closing burst to hit the QB.

Another slow start for Ngakoue, but the finish is what we’re here for. Slow to engage, then an aggressive arm-over swim move and lightning-fast burst for the close. That’s not how you start, but it’s definitely how you finish.

Hopefully by now I’ve adequately detailed how ridiculous Ngakoue can be when pinning his ears back and getting after the passer. However, it can be an entirely different story against the run. On this play, he tries to get across the tackle’s face. Once he “gives up his numbers” and turns his shoulder to the tackle, with a weak base, this is an easy pancake. The run goes right where he was lined up, and this is a play where he needs to force the tackle back instead of trying to slant.

It isn’t easy to stand out among LB/DL prospects at a school that has produced the likes of Randy White (80s phenom Dallas LB), Kris Jenkins, E.J. Henderson, Shawne Merriman, and D’Qwell Jackson. However, Ngakoue’s single-season sack record is remarkable in and of itself. He is also tied for fourth all-time for the Terps, even more impressively.

It’s hard to deny his talents rushing the passer. He is violent and disruptive, with a top-notch short area burst to close on the passer. On the edge, he gives himself room to work and manages to recover from failed moves by attempting others. He also has a very filled-out toolbox, able to attempt anything from a bullrush to a spin move on any given play. Where he struggles at times is knowing what he’ll do on that play.

However, it’s his slow get-off that is the most problematic. Against college offensive tackles, he’ll have time to recover and get into his moves. In the NFL, he’ll need to explode of the line if he wants to get to the passer. That slow get-off will get him blocked into oblivion.

Ngakoue also struggles against the run and is a downright liability at times. A lineman with a good anchor who is able to get his hands outside on Ngakoue is a death warrant for his presence against the run. If you want to see this repeatedly on tape, just check out his 2015 Ohio State game, where he got absolutely swallowed by some first-round NFL talent.

In short, Ngakoue projects as a late-Day 2 guy to me. He has tremendous upside although lacking that true twitchiness. He has great pass rushing ability as is, and will need to work on his run play. Although he is a member of the recent DE/OLB tweener corps, I think he could easily project at 4-3 DE or 3-4 OLB. I prefer him at the latter, which allows him to work his hips a little bit better in space, but I think he could bulk up and play with his hand down if needed.