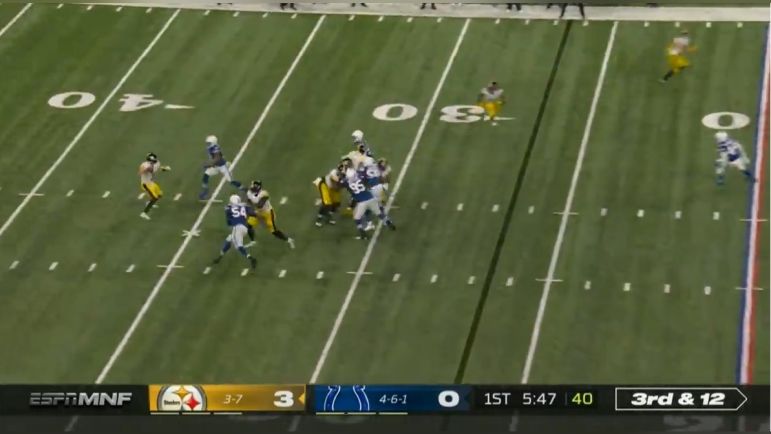 You guys know how it goes. All sacks show up the same on the box score but they’re not all created equal. Nowhere was that as true as it was on the first sack Kenny Pickett absorbed in Monday night’s win over the Indianapolis Colts. On first watch, seeing RDE Yannick Ngakoue, the Colts’ top pass rusher, coming free off the edge feels like a total o-line breakdown.

How do you not block that guy?

So let’s explain it.

Normally I save these for my sack breakdowns and we’ll of course briefly revisit things later in the week. But it was such a talked about and teach-tape moment of how lines block things and why things can look so bad but be coached so correctly.

3rd down. Here’s the pre-snap look. Steelers have just five blocking here, the offensive line, with all eligibles running routes. The Colts mug the strongside A gap and weakside B gap with linebackers while they have players in every single gap. 3T/4i in the B gap, 1T in the A, with two defensive ends shaded wide outside the tackles. 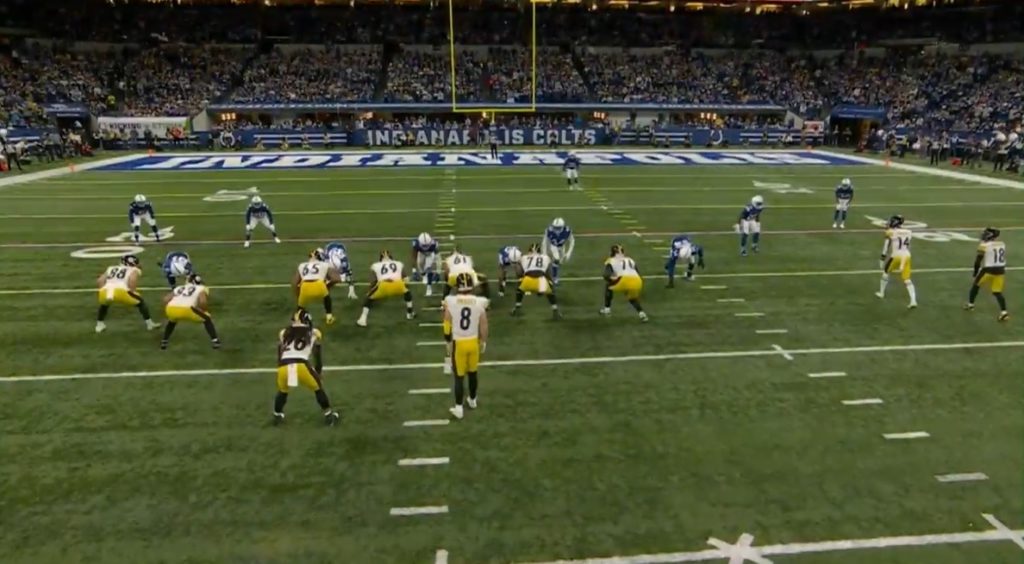 With RB Anthony McFarland running a route, the line is responsible for both linebackers. They have to block it inside-out and must assume that either or both ILBs are blitzing. With six potential threats and five blockers, the numbers say one man can’t be accounted for. So here are the assignments.

Meaning there is no one to block the RDE Ngakoue. 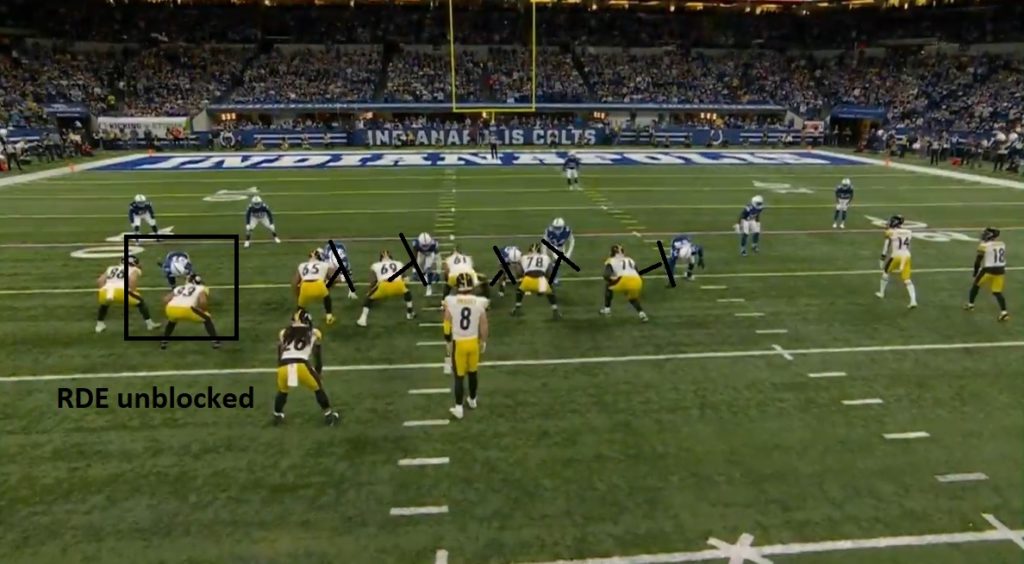 Why has the line effectively slid right instead of left? Either way, there’s going to be an unblocked defender. With the ball supposed to be thrown to the left, Pickett will be able to see the RDE as opposed to throwing away from the unblocked defender, increasing the chance of a blindside hit and sack/fumble.

So on the snap, the line does its job. But the Colts, as defenses often do, bluff the blitz and drop one of the linebackers out. Still, Pittsburgh must respect it and can’t assume one or both will drop so the line pinches. That’s why it looks “wrong” with the four linemen crashing down on just three defenders. But no protection is built with the benefit of hindsight. 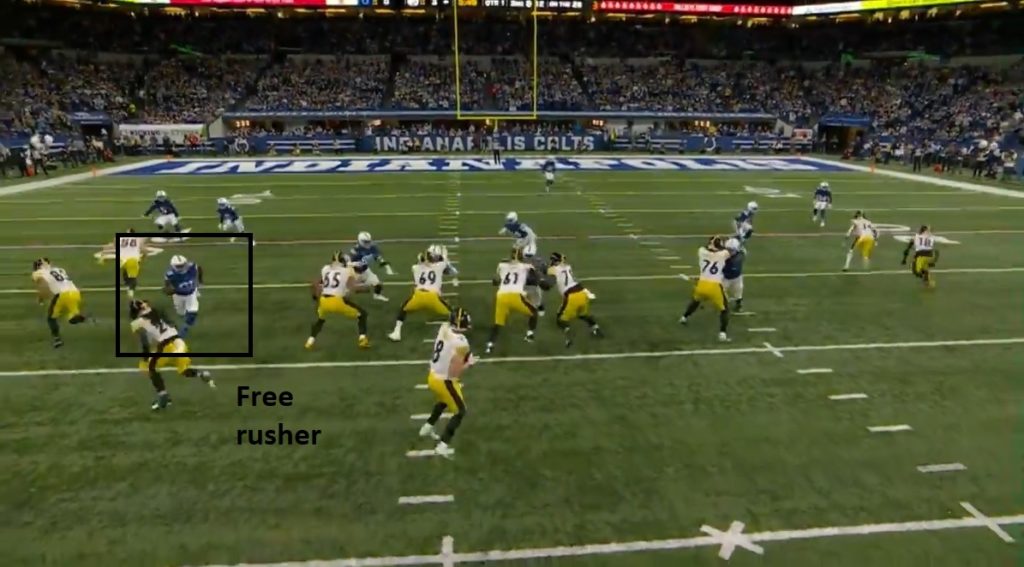 It leaves Ngakoue free. Pickett is waiting for McFarland to break open on his angle route, which takes time to run, and by the time McFarland breaks, Pickett is under pressure and doesn’t risk the throw. Instead, he takes the sack.

None of this is on the offensive line. They carried out how to protect out of what’s effectively empty with the back running a route and no one else staying in to block. So who is to blame? I’d start with the QB. When you get that pre-snap look, you know the ball must come out “hot.” Meaning, the line doesn’t have enough people to block all potential threats and there will be a free rusher. The QB will have no time to throw and the ball must come out immediately. That doesn’t happen. There’s no time for McFarland to run his angle/Texas route and that creates the sack.

In fact, the same thing happened a week ago against the Cincinnati Bengals. Here, LDE Sam Hubbard rushes in free thanks to the same Mug look. Pickett knows it’s coming and has some potential hot routes but with the way the Bengals dropped out, the hots were more-covered and Pickett took the sack there, too.

Now, you could blame some of this on OL Coach Pat Meyer, who is responsible for creating protections and answers to any blitz looks. With two sacks here off these looks in two weeks, and you can bet the Colts were playing off what the Bengals did, the Steelers should probably start changing their protection or having better answers here. The tight end staying in, the back staying in, or a better hot route system to support Pickett. Critiquing Meyer here is fair.

Still, that’s not on the offensive line. Sometimes, looks can be deceiving. And here, they certainly are. The o-line did everything correctly here. Everyone else dropped the ball.